Things of that nature: Getting Joique Bell back on track against the Packers

Thoughts about how to revitalize the Detroit Lions' run game against the Green Bay Packers in Week 3.

Share All sharing options for: Things of that nature: Getting Joique Bell back on track against the Packers

Week 3 approaches, and despite being only two games into the 2014 season, we've already established two irrefutable truths about this year's Detroit Lions:

Glad that's cleared that up. Let's turn our attention to the Green Bay Packers.

Going into this week, my initial inclination was to look at how the Lions might slow down Aaron Rodgers with Darius Slay, Rashean Mathis and whoever is selected from the POD comments section to play nickel cornerback this week. But... man. That's a pretty dark place to go to this early in the season, and frankly, I'm just not emotionally prepared to handle that kind of trauma yet.

So, if the Lions probably won't stop Rodgers and the Green Bay aerial attack, they can try to do the next best thing and keep them off the field. To do that, they'll likely need to breathe life into what has been, to this point, a mostly disappointing rushing attack.

It's hard to pinpoint exactly what's gone wrong for Joique Bell so far this season. Like any running back, he's at the mercy of his blockers, and the Lions have missed their fair share of blocks in front of him. But beyond that, he seems tentative making his cuts upfield at times. One of my favorite things about Bell is how he always seems to hit the hole with power and fall forward, so even if he doesn't break off a huge gain, he never fails to pick up positive yardage. That hasn't shown up on film so far this season. Strangely, many of his carries (and even some of his biggest gains) have come on plays that seem more suited for Reggie Bush, such as toss sweeps (including that pin-and-pull we looked at in Week 1) and counter plays.

Bell has also enjoyed modest success through a combination of zone runs and off-tackle plays that sealed defenders inside. 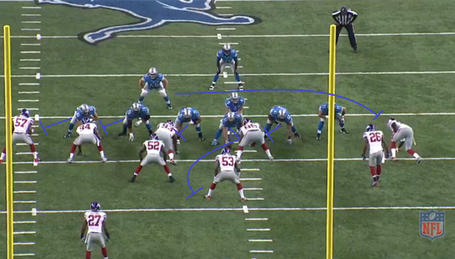 The Lions run an outside zone out of an offset I-formation here. While the offensive line steps playside, Jed Collins cuts back across the formation to block out the backside defensive end. This block serves two purposes: First, it prevents any ultra-athletic defensive ends from penetrating into the backfield and ending the play before it begins (which Jason Pierre-Paul did once during this game). Secondly, it provides a cutback lane for the running back, should the first read prove fruitless. 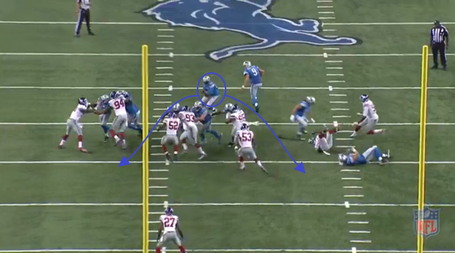 Bell has his choice of two running lanes to pursue, given the excellent blocking up front. He decides to run behind Larry Warford, which makes sense. Bell cuts through the hole and picks up 12 yards. 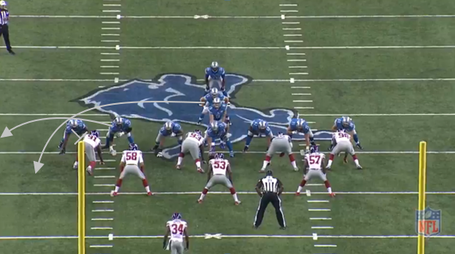 Bell's aiming point on this play is the outside shoulder of the offensive tackle, but much of this play mirrors a zone run. Everyone from the backside tight end to the playside guard steps to the right to secure blocks. Meanwhile, Corey Hilliard pulls while Brandon Pettigrew blocks down on the playside defensive end. While the rest of the offensive line steps playside to secure their initial blocks, Bell follows Collins to the outside. 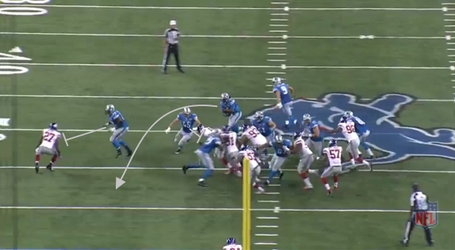 With Collins and Pettigrew sealing everything inside, Bell only has to cut behind Hilliard for a 7-yard gain before being brought down by the safety.

As anyone who watched last week's game knows, the Lions weren't able to get much going on the ground against the Carolina Panthers. Part of that is likely players still getting used to a new scheme, and part of that is playing arguably the best front seven in the NFL. Fortunately, the Lions won't have to do the latter every week, and that fact should be readily apparent against Green Bay on Sunday. If the Lions want to attack Green Bay on the ground, they can take some cues from the Seattle Seahawks. 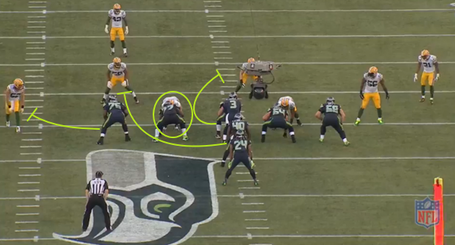 The Seahawks ran all over Green Bay in Week 1, and although Seattle does that against a lot of teams, what really stood out is how much they picked on Packers defensive tackle Mike Daniels. Seemingly every solid run by Marshawn Lynch featured Daniels getting turned inside and sealed off by left guard James Carpenter. Here, the Seahawks run a zone lead out of the I-formation. (The picture should illustrate, but if you need a refresher, I talked about the zone lead concept in the New Orleans Saints offense earlier this year.) 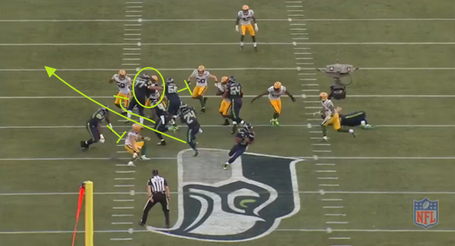 Carpenter gets a great first step on Daniels, turning him inside and away from the play. Any "uncovered" lineman's first responsibility in a zone blocking scheme is to double-team and secure the playside defender on the line, but because Daniels is already taken care of, center Max Unger gets to skip that part entirely and move to block A.J. Hawk. The leading fullback picks up the remaining linebacker, and Lynch is off for a 21-yard gain.

That wasn't the last time Carpenter humiliated Daniels in the run game. 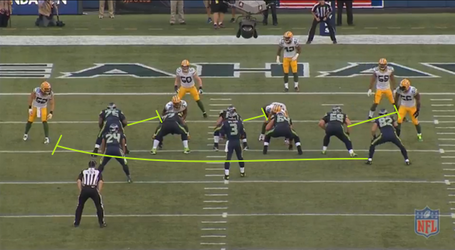 Here, the Seahawks run a similar zone play to what the Lions used above, with the playside tight end coming back across the formation to block Clay Matthews on the weak side. Again, this presents the option of a cutback lane, and Lynch is all too happy to take it. 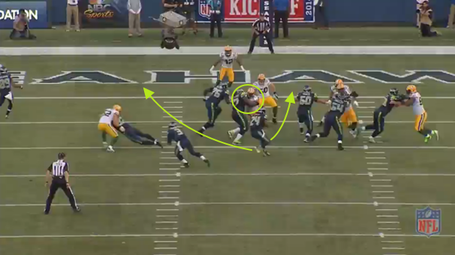 Lynch's choice is an easy one, as is his touchdown.

The Lions seem to want to get Joique Bell touches that hit outside or present him with options to cut back. If Week 1 is any indication, they'd be well-served to run those plays right at Mike Daniels. I was actually ready to suggest that the Lions do this on every play after seeing Daniels' performance in Week 1. Naturally, he responded by having the best game of his career in Week 2 against the New York Jets.

Nevertheless, Seattle provided a blueprint for attacking Green Bay on the ground, and I'd expect the Lions to emulate some of it. As much as this week's piece is about Joique Bell, it's also about Rob Sims, who should spend the majority of Sunday's game across from Daniels. By consistently gaining chunks of yardage in the run game, the Lions can not only sustain drives, but finish them in the end zone, preventing Mr. Freese from cooling off the offense. 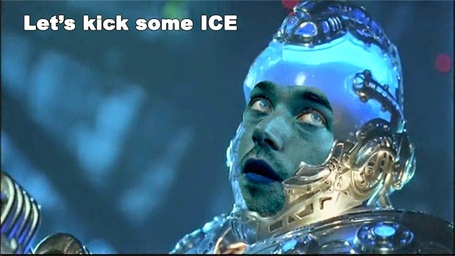