Week 3 NFL picks against the spread: Let's spank the Packers

Here are your Week 3 NFL picks against the spread.

Share All sharing options for: Week 3 NFL picks against the spread: Let's spank the Packers

Koolhand's winners picked the most games right last week, going 10-6 and moving into a third-place tie (see standings below). Speaking of "koolhands," how 'bout we keep them cool and not lay our hands (or switches) on women or helpless infants? And no, Megatron, how you discipline your children is not a private matter if it rises to the level of child abuse or injury to a child, as is the case with Adrian Peterson. Let's keep the hitting and focus on discipline on the gridiron, people.

Tampa Bay (0-2) heads to Atlanta for their first road game of the season on a short week with half of their team riding along with disabled stickers. Falcons bounce back after getting destroyed by the Bengals in Week 2.

This week in if-this-then-that stats: Buffalo is 6-27 against the spread since 1998 after playing divisional foe Miami. I don't even care that Ryan Mathews is hurt (again).

No A.J. Green means mo' Mo' Sanu, you know? You knew. Well, that's fun. Tennessee is 6-1 straight up against duh Bungles over their last seven meetings.

The Cowboys beat the Rams 31-7 in September last year. Everyone and thing is questionable in this game. If DeMarco Murray makes it out alive, I suspect it'll be at least a two-point win.

DeSean Jackson tipped off master of tippers LeSean McCoy that he is playing this week against his old team despite being questionable with a sprained AC joint. I fully expect Jackson to lose a fumble at the 1-yard line as he prematurely celebrates on his way into the end zone.

Adrian Peterson was reinstated for all of two days before being deactivated again due to public (and government) pressure. Apparently "whoopin" your four-year-old boy, inflicting multiple bloody cuts and bruises, rubs people the wrong way. NO WAY!

New Orleans is not falling to 0-3, not in their home opener, not against Matt Cassel.

The Pats are 9-0 in their last nine home games and this is their home opener. Oakland got drubbed at home against Houston last week, 30-14, and now have to fly to Foxborough? Gooooood luck.

I will not trust the Giants until they prove me otherwise. The Texans may be traveling all the way from Oakland after a big win, but Bill O'Brien has his boys in order, ready for 3-0 against the sorriest team in the NFL right now after being sorry themselves a year ago.

The Ravens have taken 11 of the last 12 in this "rivalry," and who knows if Cleveland is no longer Cleveland-like. Something needs to happen in Cleveland to get people talking more about Johnny Manziel.

Andrew lady Luck doesn't get a much better 0-2 present than Jacksonville. Luck is 9-1 against the spread coming off a loss (his first loss coming last week) and Blake Bortles still isn't quarterbacking the Jags. Colts win easily.

After losing 43-8 (!!!) in the Super Bowl last year, Denver is going to be ready to not be embarrassed again. Seattle may still win, but it'll come late and close.

The Chiefs may be without Jamaal Charles (high-ankle sprain), but his replacement, Kniles Davis, is as good of a handcuff as handcuffs get. Miami is 9-26 against the spread at home against teams with losing records since 2003, and I don't think the Chiefs are a 0-3 team, injuries included.

Luke Kuechly is really, really good. The Panthers might be without Kelvin Benjamin, but that won't matter much.

I'm making this pick assuming Eric Decker is out with a hamstring strain and Jay Cutler throws another three touchdowns on a fairly weak Jets secondary. 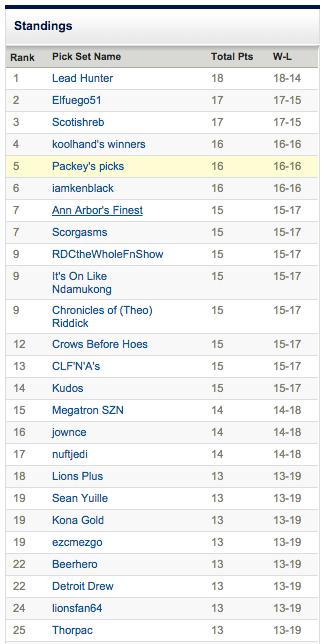 If you're not in these standings, please let me know in the comments (with your record through two weeks) and I'll add you below. Thank you.