A look at the Green Bay Packers' struggles through two weeks and how the Detroit Lions can take advantage.

Share All sharing options for: Exploiting their weaknesses: The Green Bay Packers

The Detroit Lions open up divisional play for the 2014 season on Sunday against the Green Bay Packers. The Packers are coming off their third straight NFC North title. However, their 2014 season is off to a rough start, having lost their opener in convincing fashion against the Seattle Seahawks, then almost dropping their home opener against the New York Jets. Though the Packers remain the division favorite in most eyes, Green Bay has shown plenty of weaknesses through two weeks that the Lions may be able to take advantage of. Let's take a look at some of them.

What was once considered one of the most-feared offenses in the game has been somewhat tamed this year. The Packers rank just 13th in passing yards this season and 26th in rushing yards. Though the Seahawks and Jets both have above-average defenses, for Packers teams of the past, it didn't seem to matter who they were facing. But this year's team has a clear Achilles' heel: the offensive line.

As Eric Shinabarger pointed out earlier, the Packers offensive line was a bit of an enigma last season, ranking anywhere from fifth to 26th based on whatever site or measure you're using. This year, they are starting a rookie at center and have already lost their star right tackle to injury. The results have been a running game that is averaging just 3.7 yards per carry (24th) and a passing game that has suffered seven sacks already (tied for second-most). Here's a good example of what is going wrong for the Packers' front five:

The Packers are facing a third-and-1 here, and they don't even come close to converting. There's a lot of BAD going on here, so let's work from left to right. The first failure on the play comes from left tackle David Bakhtiari (No. 69). He tries to cut block a defensive tackle and barely gets a piece of his defender, who eventually prevents any hope of a cutback lane. The left guard and the center double-team the other defensive tackle, but the center heads to the second level before the left guard has proper leverage on the defender. This defender plugs up the hole and leaves no room for Eddie Lacy. Finally, the right guard fails to drive his defender backward, and the Jets player eventually slips the block and picks up credit for a tackle on the play.

It'd be one thing if the Packers were struggling with chemistry -- it is only two weeks into the season and the Packers have two new bodies on the line -- but this clip shows the Packers struggling with basic concepts like cut blocks. With the Lions bolstering an impressive defensive line, I wouldn't expect the Packers to get the running game going this week.

This should force the Packers into a lot of third-and-long situations, an opportunity for the Lions to exploit the Packers' poor pass protection.

Last week, the Jets liked bringing disguised pressure on clear passing downs, and it worked to the tune of four sacks on the day. 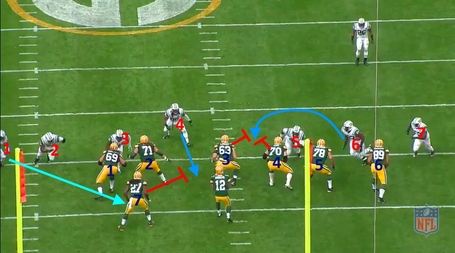 On the play above, the Jets send seven blitzers, while the Packers keep seven players to protect Aaron Rodgers. But the Jets end up getting a defender with a free shot at Rodgers thanks to a little creativeness on defense. The defensive end loops around toward the center of the line, occupying the center and right guard. This frees up a big lane for the blitzing safety up the middle. Lacy does a great job of picking up this blitzer, but that leaves the linebacker to the left with no one blocking him.

So far this year, the Lions have not been afraid to bring the pressure, and unlike previous seasons, they have had some success in getting that unblocked defender to the quarterback:

The Lions send two linebackers to blitz on this play: Stephen Tulloch and Tahir Whitehead. Tulloch breaks free, because of a very similar stunt to the one from the Jets. Defensive end Jason Jones sweeps toward the middle of the line, taking the right tackle and right guard with him. This leaves a huge lane for Tulloch to blitz through, and Tully finishes the play nicely.

Rodgers is a great quarterback and will likely get some big plays against the weakened Lions secondary. Therefore, it is the Detroit front seven's job to make big plays to get Rodgers off the field as quickly as possible.

The Packers defense hasn't been very good through two weeks. They have given up the fourth-most points in the NFL and the second-most rushing yards. Their biggest weakness is their front seven defenders, and this was quite obvious on this third down run from the Jets:

Granted this was a third-and-13 play and it caught the Packers off guard, but this still represents how the Packers can be physically dominated on the ground. Watch as the right guard pulls of a successful "wham" block and sends the defensive tackle flying. Also, the Jets successfully get to the second level and render the linebackers moot. Just look at the lane the running back has: 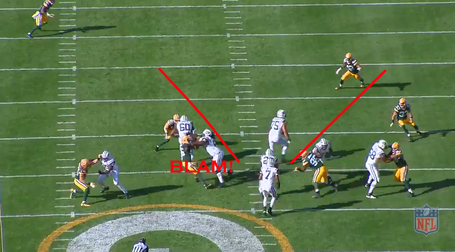 While the Lions' offensive line has had their own problems, look for them to really push the running game against the Packers' soft front on Sunday.

Overall, while Aaron Rodgers is still Aaron Rodgers, the Packers are anything but flawless through two games this year. Their weaknesses line up pretty well with some of the Lions' strengths, which should give Detroit a good chance at handing the Packers their second loss of the season.