Check out our preview and prediction for the Detroit Lions' Week 3 matchup with the division-rival Green Bay Packers.

The last time the Green Bay Packers were in town, the Detroit Lions took it to them. Outgaining them by over 400 yards, the Lions stomped their way to a 40-10 victory. Of course, the Packers would have the last laugh, eventually stealing the division title out from underneath the Lions. This week, the two teams will face off in the first NFC North matchup of 2014. The winner will take an early lead in the division standings and will set the tone for the rest of the season.

This week we are doing away with 2013 data and moving forward with this season's data. There isn't a lot of good data on these teams yet, but it's time to put last year behind us. On to the mini-charts!

Despite a seemingly poor performance last week, Matthew Stafford and the Lions actually exceeded the Carolina Panthers' defensive averages on Sunday. Of course, there is very little data to account for their averages this season, but overall their performance seems a bit better when you consider that the Panthers are holding opponents to just 207.5 passing yards per game.

Overall, Stafford ranks 11th in passer rating (93.6), t-fifth in yards per attempt (8.0) and 22nd in completion percentage (61.3 percent). Last week was definitely a step back for Detroit, but so far this 2014 passing offense is much better on paper than it was last season.

The Packers pass defense has been the definition of average through two weeks. Based on yardage, they seem like an elite group, but both the Seattle Seahawks and the New York Jets focus their offense around the running game. Honestly, this chart tells us very little, so let's look at the raw numbers.

The Packers rank 14th in passer rating allowed (85.9), eighth in yards per attempt allowed (6.1) and sixth in completion percentage allowed (58.3 percent). They also rank t-20th in sacks and only have one interception (t-15th).

Based on very little data to work with, the Packers seem like an average pass defense, possibly a little above average.

Player to watch: Calvin Johnson. The best receiver the Packers have faced thus far is... Percy Harvin? Green Bay's secondary has yet to be tested by a dominant receiver like Calvin. How they respond will tell us a lot about their defense.

Advantage: Lions +1.5. While the Lions made some bad mistakes in the passing game and are still trying to figure out their right tackle situation, the truth is the Lions moved the ball fairly well against a good pass defense last week. They absolutely dominated a mediocre defense in New York. I have a hunch that Green Bay's defense is worse than New York's, but even if they are comparable, the Lions should be successful through the air.

The Lions haven't been able to get anything going on the ground this season. Joique Bell and Reggie Bush have combined for just 128 yards through two games (at just 3.2 yards per carry). While they have faced good defenses thus far, they performed well below those teams' averages on defense. Overall, the Lions are averaging 3.0 a carry (29th) and are earning first downs on just 14.6 percent of rushes (29th).

This chart is both shocking and a little misleading. The Packers have given up a ton of yards (second-most) and are ceding a high yards per carry average (4.8, t-21st). However, they have actually held their two opponents below their rushing averages in every category but one.

Overall, this is still a very bad run defense. I won't say this very often, but the chart above is a lying liar who lies. Ignore it.

Player to watch: Clay Matthews. Last week, the Lions' run offense was shut down completely by Luke Kuechly. Matthews hasn't quite been the same since battling through injuries in the past two seasons, but he is still fully capable of making game-changing plays on defense.

Advantage: Draw. These are two terrible units. The optimist in me wants me to believe there's no way the Lions don't get something going on the ground this week, but there's no real statistical evidence of that happening. That being said, I have a hard time believing the Packers will be particularly strong at stopping the run. So... who knows?

After a poor season debut and a troubling first half against the Jets, Aaron Rodgers rebounded nicely to put up a stat line that he is much more accustomed to.

Though those numbers look modest, strength of opponent accounts for much of Green Bay's struggles thus far. This is still a very good pass offense.

The Lions pass defense had a bit of a setback last week after allowing the floodgates to open in the second half against the Panthers. As I said last week, there isn't a lot to draw from the Lions' first game against the lowly New York Giants, but Detroit held its own for a while against Carolina. Unfortunately, the Lions secondary is even more beat up than they were last week, so it's hard to imagine the Lions getting on the right track this week.

Player to watch: Jordy Nelson. Nelson is the Packers' big-play threat. Last week, on the first offensive play after the Jets had tied up the game late in the third quarter, Nelson took a Rodgers pass 80 yards for the game-winning touchdown. Last year the Lions kept Nelson in check (just 92 yards in two games), but with a banged-up secondary, Nelson is poised to break out this week.

Advantage: Packers +1.5. There's little doubt in my mind that the Packers still have a top-10 pass offense. However, Detroit can tip the scales in their favor in this matchup with consistent pressure from the front four. The Packers have already given up seven sacks on the season. Detroit will need this pressure to have any chance of winning this matchup, as the secondary is looking gloomier and gloomier.

The true identity of the Packers running game has yet to be revealed. Though their raw statistics are poor (26th in yardage, 24th in YPC), they have faced two of the statistically best run defenses in the league. The Packers actually managed to outgain most of those defenses' averages with their modest performances.

Still, it's hard to imagine the Packers having an excellent running game. With a rookie starting center and a backup right tackle, the Packers are likely an average running team this year.

The Lions run defense looks to be the real deal again this year. Though the Giants and Panthers aren't the greatest tests for them yet, holding both opponents well under 3.0 a carry remains very impressive. Overall, the Lions have allowed just 2.5 yards per carry (first) and have only given up seven rushing first downs this season (t-first).

Player to watch: Corey Linsley. The previously mentioned rookie center is still learning in the NFL. He hasn't developed a full chemistry with Rodgers or his fellow linemates. Look for the Lions to do a lot of stunts and twists to try and confuse the 23-year-old.

Advantage: Lions +1. It's hard to imagine the Packers reaching over 100 rushing yards in this game. The only way I see that happening is if the Packers get one long rush against the Lions. Otherwise, I'd expect a fairly quiet day from Eddie Lacy and company.

Last week, I was one of the few Pride Of Detroiters to take Carolina, 23-17. It was a fairly accurate prediction that would have looked a lot better had Freese not missed a couple field goals. On Paper remains undefeated.

It wasn't pretty in the comments section, as most predictions not only had the Lions winning, but had them scoring over 20 points. Our co-winners this week are BarryStillRules and Singledigit, who both predicted a 21-13 defeat. Here is your prize: 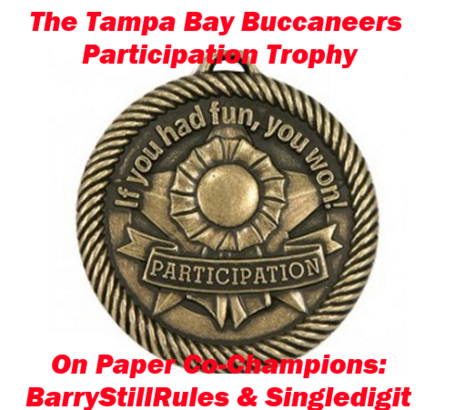 The Lions end up with a +1 advantage. It will be no easy task for the Lions to take down the Packers. As I'm sure most of you have heard by now, the Lions have never won a game in which Rodgers has finished. But the Packers offense isn't what it used to be, and their defense may be a huge liability. I believe the Lions pass offense is better than it was last year, but the question is how much better? If they can take it to the Packers defense and make them one-dimensional on offense, the Lions should come away as the victor. Lions 27, Packers 24.