Patience in run game pays off for Lions, Reggie Bush

It hasn't been smooth sailing for the Detroit Lions run game this year, but they stuck with it on Sunday and got a big touchdown run from Reggie Bush.

Share All sharing options for: Patience in run game pays off for Lions, Reggie Bush

The Detroit Lions run game by no means has been perfect so far this this season. In fact, most would classify it as pretty poor. Over three games the Lions have amassed 261 yards on the ground (25th in the NFL) with only a 3.0 yards per carry average (31st in the NFL). Not too good.

The good news for the Lions, however, is that they've been able to sustain drives with their run game when they've had the lead. So while the run game isn't necessarily opening up things for the offense, it is helping the Lions own time of possession and win games.

In the Green Bay Packers game in particular, the Lions were able to not only churn clock running the ball, but they were able to put points on the board and essentially put the game out of reach with a 26-yard run from Reggie Bush. 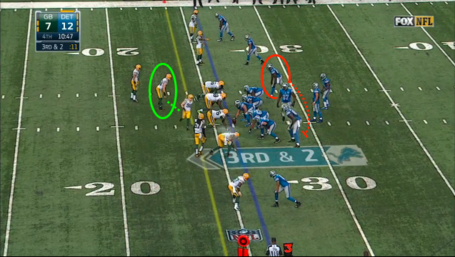 The Lions come out in 11 personnel (1RB+1TE+3WR) on third down. Brandon Pettigrew starts out offset near the right tackle, but Matthew Stafford motions him across the formation next to the left tackle. This motion draws in Packers linebacker A.J. Hawk. 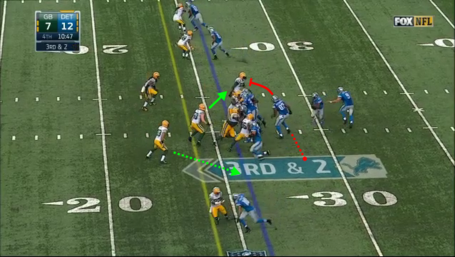 At the snap, Pettigrew again crosses back across the formation and Hawk continues to follow him toward the middle of the field. At this point the Lions have the Packers in their crosshairs. Hawk is sucked up near the line of scrimmage, and by the time he recognizes Bush going the opposite way, it's too late. 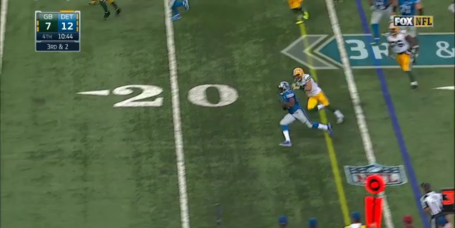 The only player standing between Bush and open field is safety Micah Hyde. The second-year safety doesn't have the speed or angle to catch Bush to the edge. Once in the open field, Bush does the rest.

The Lions run offense did enough to get back to respectability, gaining 115 yards on the ground Sunday. The Lions will need to keep the ground game going next week as they head to the east coast to face the New York Jets.