Breaking down the New York Jets' vulnerabilities and how the Detroit Lions can take advantage.

Share All sharing options for: Exploiting their weaknesses: The New York Jets

The New York Jets will finish their gauntlet of NFC North opponents this week by hosting the Detroit Lions. In the past two weeks, the Jets have fallen to the Green Bay Packers and the Chicago Bears (they will play the Minnesota Vikings in December). The Lions will be looking to make it a clean sweep for this three-week span, and to do so, they'll have to attack the Jets' weaknesses. What are those weaknesses? Let's take a look.

The Jets offense is heavily reliant on their running game. They have the second-most rushing yards and fourth-most rushing attempts in the league. Looking at the rest of their offense, it is easy to see why they are so reliant on running the ball: their quarterback is extremely mistake-prone, and their receiving corps is woefully thin.

The Jets' passing game is a big vulnerability, and the Lions would be smart to attack it. The easiest way to do this is to pressure Geno Smith. Smith is above-average at avoiding sacks and moving around in the backfield, but it is his decision-making under pressure that really hurts his game. Pro Football Focus explains:

Signature Stat: Pressured on 17/47 dropbacks last night Geno went 3/14 for 17 yards with no touchdowns or interceptions, earning a passer rating of 39.6 under pressure.

Of course, getting pressure is easier said than done. The Jets have a formidable offensive line, led by one of the best centers in the league, Nick Mangold. But as I watched more tape, the weak link in the offensive line became obvious: left guard Brian Winters. Winters battled all offseason to fight off rookie Dakota Dozier for the starting position. Winters edged him out, but he may be on a short leash.

This is a perfect example of pressure leading to a very bad decision from Smith. After Winters gives up a bad pressure up the middle, Geno throws an extremely dangerous pass instead of just taking the sack.

The Lions have two dynamic defensive tackles in Ndamukong Suh and Nick Fairley. Watch for them both to attack Winters and give Geno a hard time in the backfield.

Because the Jets don't have any particularly terrifying receivers (especially if Eric Decker can't give it a go on Sunday), expect the Lions to play two deep safeties again this week, relying on their front four to generate the majority of the pass rush and to stop the run. While the Jets have a good offensive line, the Lions still should be able to disrupt the Jets offense enough to force Smith into a few bad mistakes.

The Jets defense is a little tougher to crack. In a lot of ways, the Jets defense resembles the Lions defense: a tough, dynamic line used to mask the deficiencies in the secondary.

The Jets' defensive line is led by reigning Defensive Rookie of the Year Sheldon Richardson and the All-Pro (second team) Muhammad Wilkerson. Containing the two will be difficult, if not impossible, considering the Lions' offensive line issues thus far. The Jets like to move Wilkerson around. This means that whoever is lined up at right tackle will have to see Wilkerson often. 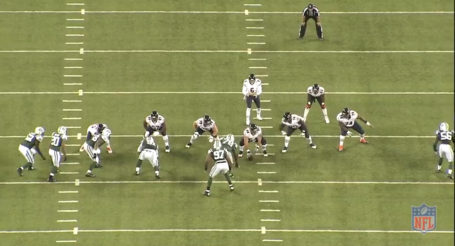 The key to countering this pass rush is to use it against the Jets. Think screens, quick slants, misdirection. Remember, the Jets do not have a very good secondary, and their best cornerback, Dee Milliner, may be out again this week. So any time Matthew Stafford can get the ball off, good things should happen (the Jets are allowing a passer rating of 100.4).

Watch as the Bears nearly score a touchdown on a simple screen against the aggressive Jets defense:

If either the tight end or the offensive lineman finishes his block on the cornerback, that's an easy touchdown. The key is speed, and the Lions have plenty of it.

I expect the Lions to use Reggie Bush plenty in the passing game, like they did last week against the Packers (eight targets, six catches). Bush's speed and agility allow him to get open quickly, before the pressure comes. Watch this play below, in which Bush destroys the ankles of a linebacker in coverage:

Reggie (in the slot toward the bottom) gets open in a hurry, well before the blitz makes its way to Stafford. Stafford doesn't end up looking to Reggie on this play, but there's no doubt he's seen this by now and knows the damage that Bush could have done on this play.

Of course, the Jets don't blitz on every play. And that's when Stafford has to take his shots. Because remember, this...

...is the Jets' best defensive back.