Week 4 NFL picks against the spread: Hands to the face

Here are your Week 4 NFL picks against the spread.

Share All sharing options for: Week 4 NFL picks against the spread: Hands to the face

Welcome to the Week 4 edition of our 2014 NFL picks against the spread, where koolhands prevails (12-4 last week!), some teams are on byes and Rex Ryan probably wishes he could have attended Joseph Fauria's footgolf outing.

Let's get these picks off before someone gets called for illegal contact:

I thought the Redskins were going to cover, but then I watched them get dismantled by the Cowboys on South Park, and I'm just not sure they can recover from that.

This game is in London. During the week, Ryan Tannehill was seen playing a game of cornhole with a backup wide receiver. This t-shirt is going to get awkwarrrrrd.

The J-E-T-S are 18-3 against the spread at home following a loss and the Lions are a perennially bad road team and depleted on D. If only the Jets would have taken care of business on Monday Night Football...

Two 2-1 teams do battle after losing an opportunity to go 3-0. I can't believe I just recently noticed Ryan Fitzpatrick's beard! He looks like Van Pelt from Jumanji.

Steve Smith Sr. is going to want to make an impression.

How does a team come back from a 56-14 beatdown? Not by having to play in the Steel City the next week against a team that just punished a better NFC South team.

A co-worker of mine is a huge Jaguars fan, and he advised me to not take Jacksonville with a 26-point cushion (+14 teaser league)... and yet, here I am. I'm going out on a Blake Bortles limb that the Chargers are overlooking the Jags a little bit here after two huge wins -- one against the defending Super Bowl champs and another on the road against a 2-0 team.

Jim Harbaugh's team is the most penalized in the NFL. I don't care.

Teddy Bridgewater's debut. He should grow up and change his name to Ted. Water under the bridge. You heard it here first. 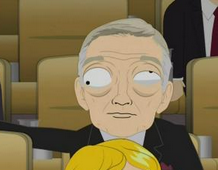 The Patriots struggled at home against a bad, jet-lagged team, and now they have to go into rowdy Arrowhead for Monday Night Football? Either the Patriots bring in some interns who can catch the football or Tom Brady might want to dust off the resume. 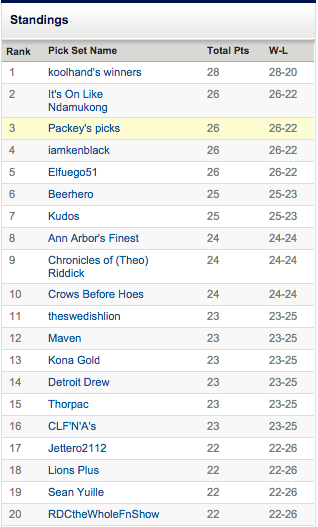 If you're not in the standings above (the POD Yahoo! league), please post your picks in the comments and give me your record thus far. I'll keep track of your records henceforth. Yes, you, Northern Lite! Thank you.