Things of that nature: Ziggy Ansah's role in the Lions' pass rush

A look at how the Detroit Lions' seeming lack of an edge rush actually aids their pressure up the middle (featuring numerous guest appearances by Ndamukong Suh).

Share All sharing options for: Things of that nature: Ziggy Ansah's role in the Lions' pass rush

Before I get into this week's "Things of that nature," a quick note: If there are any POD readers in New York, I'll be out that way for the game this weekend. If you see a gentleman wearing a Don Muhlbach jersey, that's my friend Ted. (I have to imagine that no one other than Muhlbach himself wears that jersey.) Come up, say hello and have a beverage. I'll be the guy in the Charles Rogers jersey. My brother will round out the triumvirate in a Ryan Broyles jersey. We could use the company/protection.

Sunday's game doesn't appear to offer much hope on the ground for either team. If a prop bet for combined yards per carry existed for this game, I imagine the over/under would be set somewhere around 2.5. I would consider taking the under. Point being, running against the Detroit Lions and New York Jets presents a monumental task for any team. And since I've spent enough time looking at the Lions' run game so far this season, let's talk about Geno Smith, Ziggy Ansah and the Lions' pass rush.

Through the first three weeks of the season, the Lions have tallied eight sacks, only three of which have come from defensive ends. On top of that, Nick Fairley, who has yet to record a sack, currently leads the team in QB hurries with three. So, raw statistics mirror what most of us already know -- the Lions have built the pass rush from the inside-out, rather than through a dominant edge rush. However, in understanding this, we should also evaluate the role the Lions' outside rushers play in creating sack opportunities for their teammates. Just as a symbiotic relationship exists between pass coverage and the pass rush, so too does it exist between different members of the defensive line. And while the Lions may not have a dynamic outside rush, they do have a disciplined one, which has been enough to help them so far. Let's take a look. 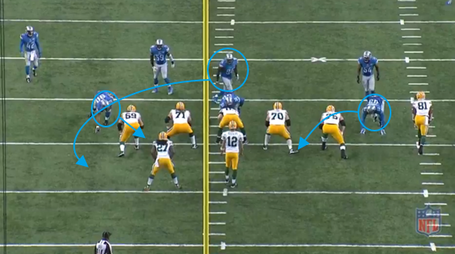 Aaron Rodgers is as good as any quarterback in the NFL at extending plays outside the pocket and providing time for big plays to develop downfield. Lions fans understand this painful reality better than most.

On this play, George Johnson shoots the B-gap on the right side of the image, while Ansah (standing over center) stunts around Ndamukong Suh, lined up as the 5-technique on the outside shoulder of the left tackle. (As a general point of information for defensive-line fetishists, Teryl Austin seems to base all his defensive line stunts around Suh [and why wouldn't you?].) 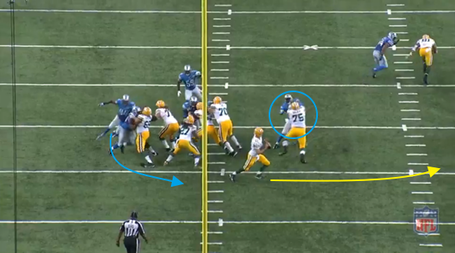 Since Suh draws the attention of both the left guard and tackle, Ansah has the opportunity to come clean around the edge and get to Rodgers. However, because Johnson gets virtually no penetration into the backfield and is locked inside, the quarterback has an easy avenue of escape. As we've seen so many times before, Rodgers scrambles to his right, buys time and finds Jordy Nelson for 13 yards, turning third-and-3 into first-and-10.

Much of the Lions' success in Week 3 revolved around the fact that plays like this were incredibly rare. A lot of that had to do with Ansah and the outside rush. For most of the game, defenders who came around the edge brought pressure without compromising control of the pocket, forcing Rodgers to stay put as the middle collapsed in front of him. 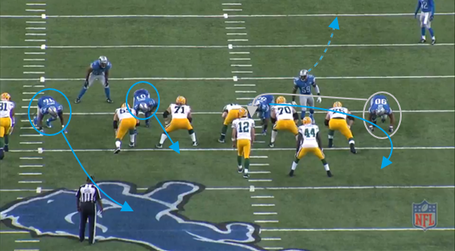 On this play, Ansah lines up wide outside the tackle, while Jason Jones plays the 3-technique outside the guard. On the right side of the image, Suh is once again lined up at defensive end, with Fairley as the 1-technique over the center's outside shoulder. At the snap, Ansah and Jones rush their respective gaps while Fairley and Suh run a twist, with Suh coming behind Fairley and through the A-gap. 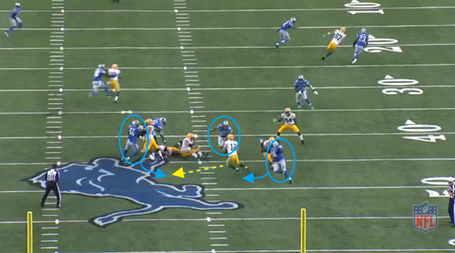 Even with their freakish athleticism, such a stunt takes time to develop with two defensive tackles. As Suh comes free through the middle of the line, Rodgers attempts to bail out and escape to his left. However, Ansah is there to prevent that escape as he sheds the block of the offensive tackle. This turns Rodgers back inside and into Suh's loving embrace.

A number of players have benefitted from Ansah's play this way. There's a reason C.J. Mosley is tied for the team lead in sacks heading into Week 4.

Going into Week 2, many of us discussed ways to limit Cam Newton's ability to break away from the pocket and create huge plays. That discussion ended up being moot, as Newton did just fine shredding the Lions from inside the pocket. However, when plays broke down, he still looked for an escape route, which Ansah and the DEs actively denied. 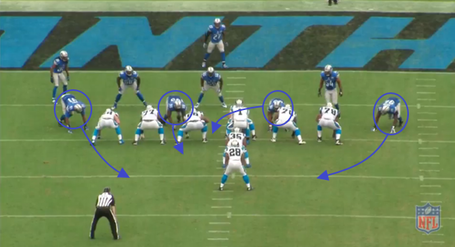 Suh hits the opposite A-gap on this play, and because single-teaming Suh is akin to ritualistically sacrificing your quarterback, both the left guard and center work to block him. This leaves Mosley one-on-one with an inside step on the tackle and Jones matched up against a running back after Greg Olsen leaves on a route. (These favorable matchups occur time and time again because of Suh's presence -- it is impossible to overstate how much he does for the pass rush.) Ansah, meanwhile, comes around the right edge. 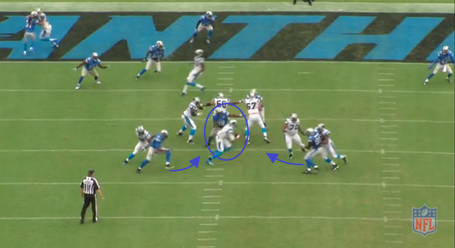 Mosley is quick enough with his first step to get by the disadvantaged left tackle, forcing Newton to pull the ball down quickly and look for an escape. However, Ansah and Jones are already turning the corner, directing Newton back into the center of the collapsing pocket, earning Mosley a sack.

That is about as picture-perfect a pass rush as you can imagine, and the stat sheet really doesn't reflect how it transpires. I don't want to discredit the work of Mosley, who is a competent defensive player in his own right, but he does arguably the least on this play and gets the official credit. Because of Suh demanding constant attention and Ansah and Jones winning one-on-one matchups to prevent a break outside, all Mosley has to do is essentially wait while Newton is forced to run into him.

This Sunday, the Lions defensive line will get the chance to tee off on Geno Smith. Most of the Jets' passing game seems built off quick-hitting routes and play-action. This is because, as Jeremy Reisman noted on Wednesday, our old friend Marty Mornhinweg wants to run the ball effectively and prevent the offense from relying too much on Smith, who is prone to making mistakes under pressure. (Really, just look back at the statistics Reisman cited.)

I won't pretend that Smith presents the improvisational threat of Rodgers or Newton, because I watch football and am a sentient human being. Even when Smith escapes the pocket and keeps his eyes downfield, things like this happen. But, it would be disingenuous of me to say he presents no threat at all. While Smith doesn't seem to be the most mobile quarterback, it's not as though he's Joey Harrington back there. When plays break down and pass rushers leave open lanes for him, Smith is able to take advantage. And, given that the Jets run a bit of zone read, designed draws and even the option pitch with him, it's clear that the coaching staff believes in his legs, too. On a few occasions, Smith converted long third-down situations with his legs against the Oakland Raiders defense in Week 1.

If Ansah and the rest of the Lions' edge rushers can close off those escape routes and force Smith to step up into the crumbling pocket, the Lions could enjoy a day of forced throws, sacks and ideally turnovers.