Two of the most dominant defenses in the NFL go head-to-head this week. But which team has the overall edge on paper: the Detroit Lions or New York Jets?

Share All sharing options for: On Paper: Detroit Lions at New York Jets

The Detroit Lions (2-1) head east this week to face the New York Jets (1-2). The Jets are coming off a disappointing week (for Jets and Lions fans alike), having dropped their Monday night contest with the Chicago Bears. After losing their last two games to NFC North opponents, the Jets are hoping to get revenge against the Lions. Detroit, on the other hand, is coming off a big divisional win against the Green Bay Packers. A win this week would keep the Lions atop the division. So how do the teams match up?

Note: Very detail-oriented readers may notice that the passing charts have different figures in them than last week. Passing yards data now reflects sack yardage subtracted from passing yards, since passing YPG stats include those figures as well.

The Lions' passing chart is beginning to look awfully familiar: a lot of yards, but with limited efficiency. After opening the season with three touchdowns (one rushing) and no interceptions, Matthew Stafford has thrown just one touchdown and three interceptions in his past two games.

Overall, the offense has been pretty disappointing, but the New York Giants game provides hope. This system is still new for Stafford, and if he can get comfortable, we've seen him light it up.

The Jets' pass defense -- like the Lions' pass offense -- looks deceivingly good based on yardage numbers. However, they too struggle with efficiency. All three quarterbacks the Jets have faced finished with a passer rating of 90 or higher. They've yet to hold a quarterback significantly below their passer rating average.

The Jets are allowing just 6.4 yards per attempt (t-sixth), a completion percentage of 60.7 (10th) and a passer rating of 100.4 (25th). They're an above-average defense, but they are struggling to make big plays. They have yet to record an interception.

Their biggest threat on defense comes from their defensive line. The Jets have already tallied 10 sacks this season, which is tied for the most in the league.

Player to watch: Eric Ebron. Because Joseph Fauria hurt his ankle shooting hoops or something and Calvin Johnson is clearly not at 100 percent, Ebron will assuredly have an increased role this week. The Lions will likely be trying to get the ball out quick to keep Stafford off his back, so expect Ebron to pick up little chunks of yards here and there.

Advantage: Draw. The key to this matchup is clearly protection. If the Lions can maintain a pocket for Stafford, Detroit should dominate. They have way too many quick, shifty receivers for the Jets' poor secondary. However, protecting Stafford will be no easy task. The Lions have struggled in pass protection this season, and Stafford doesn't make the greatest decisions under pressure.

Yikes. After a promising 2013 season on the ground, the Lions have been nothing short of awful running the ball this year. They've even faced some of the worst run defenses in the league and couldn't get much going. Last week was a step in the right direction with the Lions finally breaking the 100-yard barrier, but it took them a total of 38 carries to get there.

There aren't any stats I can find that will sugarcoat this running game. They rank 31st in yards per carry (3.0), they rank dead last in percentage of rushes resulting in first downs (15.1 percent) and they only have one rush of 20+ yards.

On the other side of the ball, you have one of the best run defenses in the league, maybe the best. The Jets haven't exactly faced any tough running threats yet this season, but they are still putting up impressive defensive statistics.

They are allowing 2.8 yards per carry (t-first), and opponents are earning first downs on just 19.0 percent of rushes (11th).

Player to watch: Sheldon Richardson. Though Richardson only has six tackles on the year, he is much more impactful than that. He is extremely disruptive in the middle of that line and makes his teammates better. The Lions' interior line will have trouble with him all day.

Advantage: Jets +2. Advantages don't get much clearer than this. The reason I only gave the Jets a 2-point advantage is because the Lions offense is much more focused on passing the ball (they pass 57 percent of the time). The Lions offense has gotten by okay without much of a running game. They'll likely have to be without one again on Sunday.

The Jets' passing offense hasn't been much of a threat this year. They've only outgained one opposing defense's averages this year, and that was because they threw the ball 43 times against the Bears.

The Jets' problem passing the ball is two-fold. First, they don't have any big receiving threats. Eric Decker, their best wide receiver, has been struggling with a hamstring injury. He hasn't practiced this week (through Thursday), but seems optimistic that he'll play. Still, outside of Decker, there aren't many options. Jeremy Kerley seems like the only other legitimate option at wide receiver.

The Jets' other issue is Geno Smith. Smith has been very poor at protecting the ball, especially when under pressure. Smith's four interceptions are the most in the league through three weeks (though Kirk Cousins managed to match that total in one night on Thursday).

The Lions' pass defense has been the biggest (and most pleasant) surprise for Detroit this season. They've held all of their opponents below their yardage and passer rating averages, and that includes two very good, very efficient pass offenses in the Carolina Panthers and Packers.

Detroit's dominance is backed up by the raw statistics. They are tied for sixth in YPA allowed (6.4), sixth in passer rating allowed (80.6) and sixth in completion percentage allowed (59.6 percent). History tells me to be weary of this data, but this is about as promising of a start for this defense as anyone could expect, especially considering the injuries in the secondary.

Players to watch: Jets tight ends. Over at Gang Green Nation they found an interesting stat about the Lions defense:

In three games tight ends have combined for 16 catches, 178 yards and two of the three passing TDs the Lions have allowed this season.  That amounts to 33% of the yardage and 67% of the TDs the Lions have given up through the air.

The Jets don't have a dynamic tight end, but they have a few they use as receiving threats. This could be the game in which the Jets' second-round pick, Jace Amaro, breaks into the NFL.

Advantage: Lions +1.5. I want to give the Lions a bigger advantage here, but I'm just not 100 percent convinced by this defense yet. The Lions' defensive line will have a pretty good test with the Jets' above-average line, but the Lions should eventually get to Geno a few times, and that's when the game could turn.

How can the Jets be ranked second in the league in rushing yet have such an unimpressive chart? Look no further than their opponents. All three teams the Jets have faced rank in the bottom seven in defending the run. Of course, we are too early in the season to know if these defenses are truly bottom-dwellers or if they are ranked so low because they've played teams like the Jets. However, the Bears and Packers were bottom-10 run defenses last year, sooooo... we should probably hold off on declaring the Jets as one of the best rushing attacks in the league.

The Jets do look impressive when it comes to their raw stats. Their 4.9 yards per carry is tied for sixth-best in the league. But only 20.6 percent of their rushes are gaining first downs (17th). Still, this was a top-10 rushing attack last year and is likely to be one again this year.

Detroit will be the biggest test the Jets have faced this season, by far. No team has met their rushing averages against the Lions. In fact, no team has even topped 76 rushing yards in a game yet.

Every stat points to this being a punishing run defense. The Lions are tied for first in YPC allowed (2.8), they are only allowing a first down on 14.7 percent of carries (second-best) and they have only allowed one rush of 20+ yards.

Their opponents thus far haven't been huge running teams, but the numbers the defense is putting up would be impressive against any team in the NFL.

Player to watch: Brian Winters. As I pointed out earlier in the week, Winters is the weak link in the Jets' offensive line. With Nick Fairley and Ndamukong Suh filling the middle for Detroit, expect to see one of them in the backfield a few times on Sunday.

Advantage: Lions +1.5. While I am hesitant to crown the Lions' pass defense, I have no qualms about calling the Detroit run defense for real. They were dominant last year, and they look to be just as dominant this season. The loss of Stephen Tulloch will hurt this unit, but they will also likely be getting James Ihedigbo back this week. Ihedigbo is excellent at defending the run, and he is fully capable of being that extra defender in the box if the Lions need him.

On Paper moved to 3-0 after again correctly predicting a Lions win. Though my score prediction of 27-24 was far from the actual score of 19-7, I was one of the few who felt good about beating Aaron Rodgers for the first time.

In the comments section, again, we didn't have any real close predictions. However, DLions4Eva's prediction of 24-13 almost had the exact margin of victory and had a much more modest-scoring game than almost every other prediction. 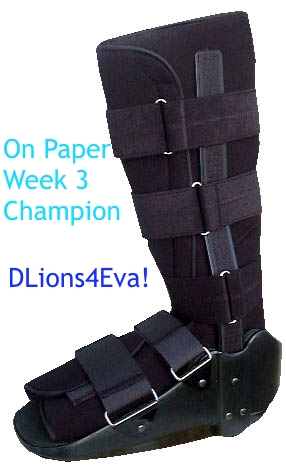 Feel free to run around freely or even do a sack dance, because you'll be protected by this wonderful leg brace! Just please be sure to wear this around the house at all times, because you never know when the Leg Injury Gods will smite thee.

The Lions end up with a tiny +1 advantage. I don't have a lot of confidence one way or the other here. If this game was in Detroit, I'd feel a lot more comfortable siding with the Lions. But the truth is, the Lions offense hasn't shown me enough to believe they will be able to crack the Jets' tough defense. However, I must abide by the numbers, even if I have a bad feeling about this week. Lions 16, Jets 10.