Breaking down how the Detroit Lions can use their tight ends to attack the New York Jets defense on Sunday.

Share All sharing options for: Attacking the Jets defense: An Xs & Os breakdown

Whether the Detroit Lions wanted it to happen this quickly or not, it looks like Eric Ebron is about to get a bigger workload in the offense this week against the New York Jets. Some of that has to do with the young tight end getting more comfortable in the offense, but most of it will be out of necessity. With Joseph Fauria injuring himself at his home on Wednesday night, Ebron's role is expected to grow, especially if Fauria is out for a significant amount of time.

Fauria was on crutches today, so highly doubt he plays Sunday.

It's going to be necessary for the Lions to scheme plays for Ebron on Sunday, especially in the middle of the field. So far this season the Jets have given up 11 receptions for 113 yards and two touchdowns to tight ends. Most of that total came last week against the Chicago Bears. The Jay Cutler to Martellus Bennett connection was good for five receptions, 54 yards and two touchdowns. The Lions would be smart to attack the Jets in a similar way on Sunday.

Beating the Jets with tight ends

Last week against the Bears' high-powered offense, the Jets blitzed on over 43 percent of Jay Cutler's dropbacks. Cutler and the Bears were able to counteract some of those pressure looks by getting the ball out quickly to the tight ends. Because the Jets committed an extra man to the pass rush, it left a linebacker or safety to cover Bennett one-on-one. 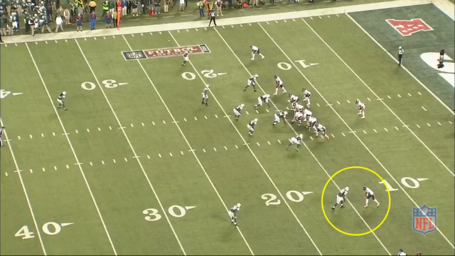 On this play, the Jets line up with three down linemen and three linebackers. What makes this a really, let's say, unique formation is that the Jets have 290-pound "linebacker" Quinton Coples in press coverage on Brandon Marshall on the outside. 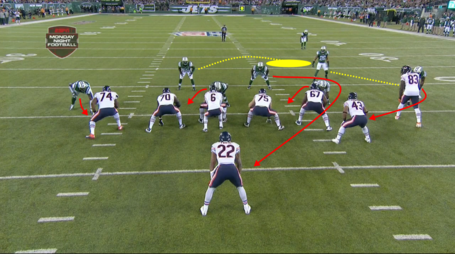 The Jets rush five and drop both David Harris and Coples into zone coverage. Safety Dawan Landry comes down into the box to defend Bennett one-on-one. 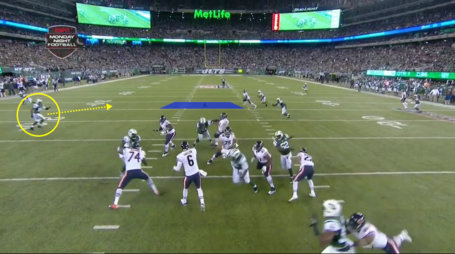 The Bears have a full set of blockers to pick up the pass rush, keeping both the running back and fullback in to block. Bennett easily beats Landry in man coverage. Coples doesn't have any chance of getting back into the middle of the field, and the passing lane for Cutler is as open as you'll ever see in the NFL, making for an easy 16-yard gain.

According to Pro Football Focus (subscription required), Cutler had his best passer rating against the Jets when throwing in the middle of the field between 10-19 yards. Including the 16-yarder to Bennett, Cutler completed six of eight passing attempts for 73 yards and two touchdowns. The Lions would be wise to attack that same part of the field with Ebron this Sunday.