Things of that nature: How Reggie Bush can attack the Giants defense

Share All sharing options for: Things of that nature: How Reggie Bush can attack the Giants defense

Happy football to all of us! So wonderful to be back in your warm embrace. We have officially escaped the vacuous, soul-sucking abyss that is the offseason, and are now ready for the emotional roller coaster of another five-month calendar year. How's everyone feeling about this season? Pretty good? I feel wonderful.

I'll get to Reggie Bush in a second. But first, a bit of explanation about this season's column.

If you read CoachSpeak last year, you might remember that I griped about the dearth of informative or interesting quotes from Jim Schwartz. As the season wore on, the whole "CoachSpeak" concept essentially devolved into a flimsy pretext for me to talk about whatever I wanted to talk about.

The Lions now employ Jim Caldwell, who, regardless of his coaching acumen, probably won't be nominated as the United States Poet Laureate anytime soon. For that reason, and also because of the time constraints involved in relying on press conferences, I'm doing away with CoachSpeak. However, out of fondness for inane coaching quotes, and as a tip of the cap to one of Caldwell's go-to phrases, I decided to name this season's column "Things of that nature." ("Obviously" didn't have quite the same zing as a title.)

Each week, I'll pick a Lions player and then spend a thousand words or so theorizing ways in which that player might be used in the upcoming game. When selecting the player, I'll try to consider specific matchups that the Lions could try to exploit or account for. I won't look at any players who are unquestionably relevant every week (sorry, Matthew Stafford), nor will I pick a player whose role remains static (sorry, Sam Martin). Of course, plays don't occur in a vacuum. If I look at Calvin Johnson, for example, I'll examine some broader route concepts run by the Lions. If I talk about Ndamukong Suh, I'll look at how his play affects the rest of the defensive line. You get the idea.

Another complicating factor, at least in the short term, is that we really don't know what the Caldwell-era Lions will look like. We can certainly speculate -- and oh, have I speculated -- but until we get a couple games into 2014, I'll make like Jeremy Reisman's "On Paper" previews and use previous seasons' film to predict the future. Certainly nothing could go wrong with that.

New York Giants linebackers seem akin to Lions cornerbacks, in that the majority of both teams' fans can't remember a time when it was a position of strength. Clearly, nothing has changed about the Lions in that regard. As for the Giants, I'll refer to the good folks at Pro Football Focus:

"It's been a long time since the Giants treated the linebacker position with priority, and it shows on a group that's lacking in difference-makers. Jon Beason got a lot of credit for the Giants defensive turnaround after Week 5, and there's no way to quantify his locker room leadership. But on film, his play didn't match the praise he received. Though he was active in run defense, his -15.1 coverage grade was the worst of any linebacker last season. Jameel McClain was brought in to play the Keith Rivers two-down run-stopper role, but it's been a few seasons since he was an impact run defender and he bottomed out with a -9.4 grade in that category last season. Spencer Paysinger and Jacquian Williams have manned their respective roles as a three-down and nickel linebacker for a few seasons now, but neither has shown more than average play. Fifth-round pick Devon Kennard has flashed in the preseason, but it will take more than a surprising rookie to turn this linebacking corps into a positive."

Reisman talked about this earlier, but the Giants' defensive strength rests in their secondary. The Lions' running backs, meanwhile, are arguably their strongest offensive position group. Logic dictates that Reggie Bush matched up against an underwhelming LB corps in space could do some damage. To get an idea as to how Joe Lombardi might use Bush (or possibly Theo Riddick), I looked at how the New Orleans Saints attacked the Giants back in 2012, when Lombardi was still working under Sean Payton.

In that game, Pierre Thomas and Darren Sproles combined for 160 yards of offense on 21 touches. They certainly didn't light the world on fire, but they consistently took advantage of opportunities for positive gains. A great deal of those opportunities came outside the hashes and in the flats.

Sproles only had five carries in the game, and three of those carries came from the same play call. 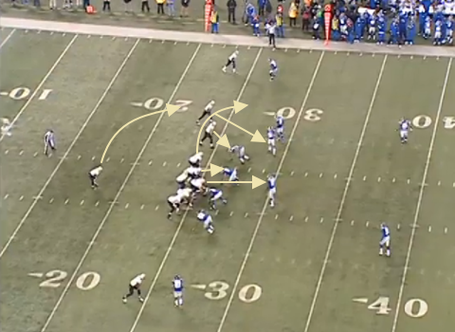 The Saints run a pin-and-pull sweep here, which gets Sproles outside quickly while neutralizing the athletic defensive ends in Perry Fewell's scheme. (While New York's personnel may have changed, Fewell remains the defensive coordinator.) In the pin-and-pull sweep, the playside offensive tackle pulls while the playside tight end and slot receiver each down block. The tight end's block in particular is crucial to the success of the play -- all he has to do is chip the defensive end inside just enough to render him irrelevant. 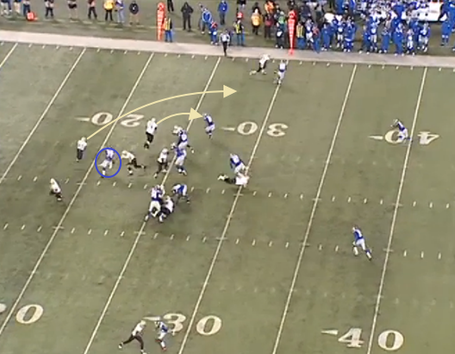 The defensive end is maybe two feet away from Sproles at this point, but with the play already developed, he may as well be five yards away. All Sproles has to do is cut upfield behind his left tackle and pick up the free yards.

Speaking of free yards, the Saints ran the same play again later in the game against an even more advantageous defensive look: 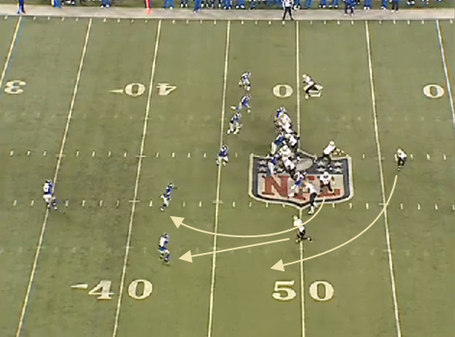 With an extra defender shifted toward the in-line tight end's side and the secondary at the bottom of the image playing 8 yards off the line, the Giants are woefully unprepared for the pin-and-pull sweep here. After another chip takes the DE out of the play, Sproles scampers behind his blockers for another 35 yards.

The Saints kept their RBs in the flats and away from the Giants secondary in the passing game, as well. 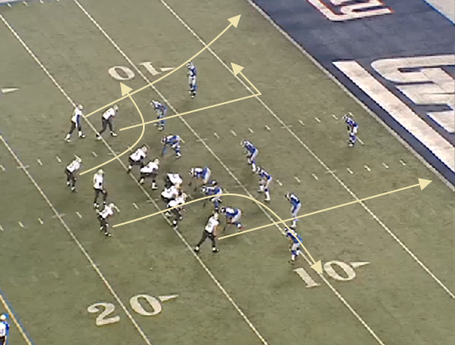 Here, both Sproles and Pierre Thomas flare out to the flats at the snap, though the route concepts on each side differ a bit. Thomas finds himself running the short out in the "triangle" concept I discussed in the offseason. The bottom wide receiver in the stack runs a deep corner while the man in front of him runs the 7-yard stick route.

Sproles, on the other hand, finds himself with plenty of real estate due to the route concept known as "Jimmy Graham's gravitational pull in the red zone." 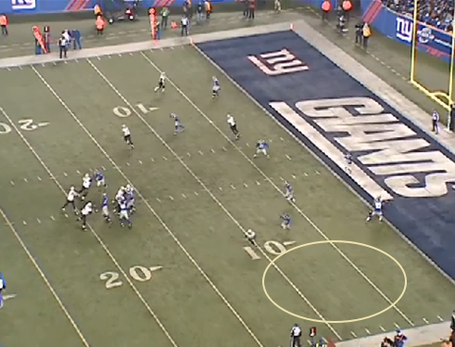 Look at the open space waiting for Sproles. That is exactly what the Saints want. The goal-line defender's back is turned, and the end zone beckons. Unfortunately, the margin for error in the NFL is razor thin, and Drew Brees' pass ends up falling beyond Sproles' hands. The result of the play doesn't change the concepts and the strategy, however.

Are the Lions going to run a pin-and-pull to Reggie Bush on Monday night? As much as I'd love to see it and feel good about myself, I don't know. But again, what we can take from this is the strategy involved, and the goal: a dynamic set of running backs against overmatched defenders in the shallow outside thirds of the field.  The Saints repeatedly tried to take advantage of these areas against the Giants. Let's see if Lombardi and the Lions will do the same.