Our statistical preview kicks off the season with a Monday night showdown between the Detroit Lions and New York Giants.

Share All sharing options for: On Paper: Detroit Lions vs. New York Giants

Welcome back, everybody! Life hasn't been the same without a little chart in my life. But football is finally back, and that means On Paper is back, colorful charts and all. If you aren't familiar with my previews, here's a quick recap:

Each chart represents one unit of a team (i.e.: Bucs Pass Offense, Lions Run Defense, etc.). Therefore, there are eight total charts (four units, two teams). Each chart lists the opponents the team has played, their performance that week and season averages to compare their performance for that week.

The purpose of this is because stats can be very misleading without the proper context. If the Lions give up 250 yards, 2 TDs and 1 INT through the air, that looks bad. But if it's against the Packers, which are (hypothetically) averaging 290 yards and 3 TDs, that is actually a very good performance. So if the team performs better than average on a given week, the cell is highlighted green; a bad performance is red. The color-coding system is based on the team being analyzed, so green doesn't necessarily mean good for the Lions. Confused? You can check out my past previews, but you'll get used it.

After analyzing each chart, I give a matchup edge to one team on a 0-5 scale. The scale is based not only on which team looks better in this matchup, but how likely this edge will affect the final outcome of the game. A +5 advantage would predict that this matchup is key and likely to win the game for the team.

Additionally, the color yellow on a chart means the team performed within 5 percent of averages.

For the first few weeks of the season, I will be using 2013 data, because preseason data is notably unreliable. Also, if you're wondering why the Philadelphia Eagles game is crossed out, it's because this preview is for football, not for snowball fights. Caught up? Let's do this: 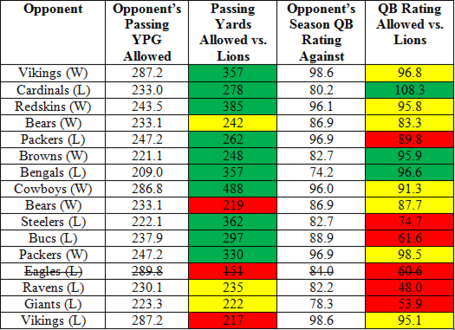 The Lions pass offense last year was all about yards and not about efficiency, especially down the stretch. They ranked third in yards and fifth in attempts, but just 11th in yards per attempt and 18th in passer rating. When the Lions needed to pull out just a win or two down the stretch, Matthew Stafford was at his worst, completing just 56 percent of his passes and throwing for two touchdowns and five interceptions in his final four games.

With a new offensive coordinator in place and a couple new shiny toys (Eric Ebron and Golden Tate), the Lions hope to be a much more efficient offense this year. 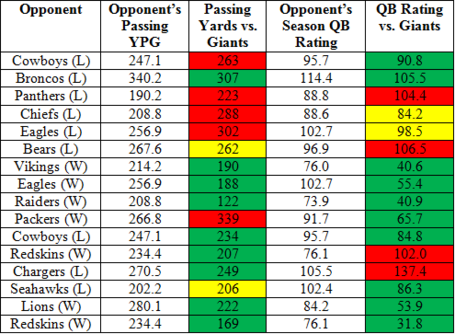 The Giants pass defense was the highlight of the team last year. Only four of 16 opponents managed to outgain their average passer rating against the Giants. Overall, they ranked sixth in passer rating allowed (78.3) and fourth in yards per attempt allowed (6.3). They managed to be very stout on defense despite only tallying 34 sacks (t-25th).

The scary thing is the Giants may be even better defending the pass this year. The Giants added cornerback Dominique Rodgers-Cromartie, and Prince Amukamara is entering his fourth year after a decent junior season.

Player to watch: Eric Ebron. With the Lions going against a very talented Giants secondary, look for them to try and utilize their tight ends and running backs in the passing game. That is a big part of their new offensive style anyway, and the Lions have plenty of talent there. Ebron could be the big beneficiary there.

Advantage: Giants +0.5. Because the Lions are still in the early stages of learning this offense, I wouldn't expect them to come out like a well-oiled machine. That being said, the Giants' pass rush won't be great with Justin Tuck no longer on the team. Still, the Giants secondary will be good enough to frustrate Stafford, especially if he tries to force the ball downfield. If he takes what the defense gives him, the Lions should be okay, but Stafford likes to take some unnecessary chances. 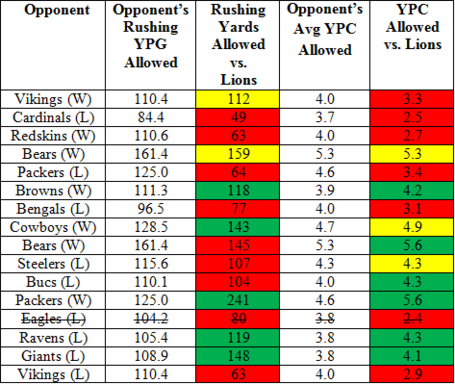 In 2013, the Lions' run offense was average, which is about as good as it has been in a while. After a slow start, the Lions started to get things going with an impressive tandem of Joique Bell and Reggie Bush. Overall, they ranked 21st in yards per carry (4.0) and t-10th in rushing touchdowns (15). 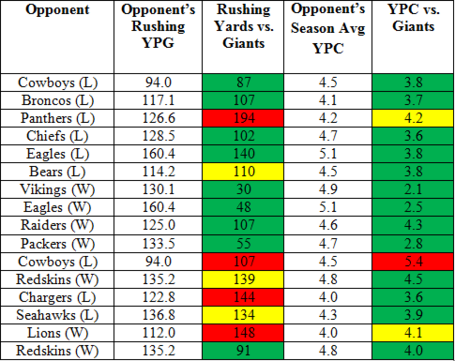 Player to watch: Bell. With the Giants' two leaders in tackles for loss from 2013 gone (Tuck and Linval Joseph), the Lions will try to attack the middle of the defense, and Bell is the best runner between the tackles. Bell had 20 carries for 91 yards and a touchdown in their last matchup.

Advantage: Lions +1. I don't think the Giants will be as dominant as they were last year, but even then the Lions won this matchup. This year should be no different. 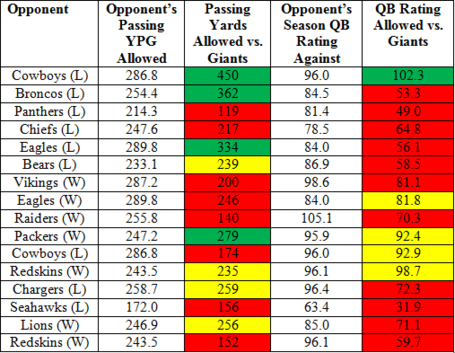 This just in: Eli Manning and the Giants pass defense were terrible last season. Only in their first game of the season did they significantly outgain the defense's passer rating allowed average. The rest of the season was an absolute disaster. Manning's passer rating dropped below 75 in 10 games last year, with six of those games dropping below 60.

As I noted earlier in the week, a lot of New York's struggles started with the offensive line. The Giants sought to fix this problem in the offseason, but with injuries to Geoff Schwartz and Brandon Mosley already this season, the Giants' problems look like they may continue.

The Lions pass defense wasn't as bad as most thought last year, but it wasn't exactly the strength of the team. Overall they ranked 19th in passer rating allowed (85.0) and t-19th in yards per attempt (7.3).

In the offseason, the Lions swapped Louis Delmas (*sniff*) for James Ihedigbo (who may not play in this game) and sent Chris Houston to early retirement. The secondary is a big question, but one that is hopefully answered by Darius Slay and a strong front four.

Player to watch: Victor Cruz. With rookie selection Odell Beckham Jr. still recovering from an injury, Cruz is easily the Giants' biggest threat through the air. Cruz did not play the last time these two teams met, so I would expect him to have some success this time around. 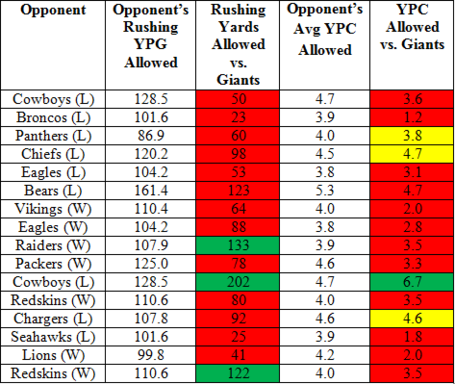 With a poor offensive line and no passing game to help, the Giants' running game suffered big. New York managed 100+ yards rushing in just four games last season and averaged over 4.0 yards per carry on just four occasions. They had the third-worst yards per carry average in the league (3.5).

While the offensive line is still hurting, the Giants did add Rashad Jennings to the team in the offseason. Although Jennings is already 28, he hasn't been utilized much and doesn't come with a lot of wear and tear. Jennings is a strong back who will likely battle out an extra few yards after initial contact. 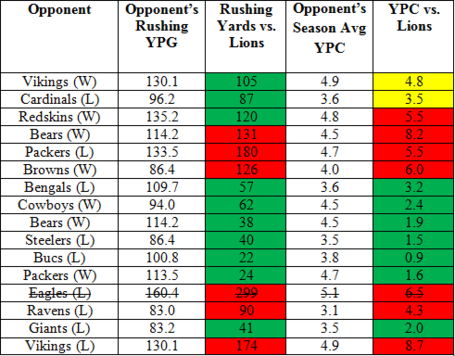 The Lions run defense was at times the best in the league and at other times frustratingly terrible. That stretch in the middle of the season was about as dominant a performance as you'll ever see, but the Eagles and Packers games stick out like sore thumbs.

Not a lot has changed in terms of personnel since last year, with just a few changes along the defensive line depth chart, but with Teryl Austin now in as defensive coordinator, you may see a more aggressive defense in place.

Player to watch: Jennings. With not much hope for a dominant offensive line performance, the Giants will be relying on Jennings to break tackles and gain yards where there isn't much room.

Advantage: Lions +2. Detroit dominated this matchup last year, and there's no real reason why they shouldn't again this year. Their defensive line against the Giants' offensive line is the biggest mismatch in this game.

New offenses. Both teams are sporting new offensive coordinators, and both will likely look a bit rusty out of the gate. Detroit clearly has more talent on their offense, but the Giants have more room to grow from last year. It is hard to imagine New York's offense getting any worse this season.

Monday Night Football. Ford Field has always been at its loudest on Monday nights. And with the Lions not having lost a game yet, the crowd promises to be at its most optimistic. If you're going to the game, you may want to sneak in a flask of Kool-Aid, because I'm sure the concession stands will be all out of it by kickoff.

Detroit ends up with a fairly significant +2.5 advantage. However, a lot of this prediction is based off of the 2013 versions of the Giants and Lions. There are a lot of unknowns, and I don't hold this prediction with a lot of confidence. Lions 31, Giants 24.

Remember to leave your prediction in the comment section. Closest prediction gets a prize!*

*Prize is just a mention in next week's column along with a crappy Photoshopped picture with your username on it.