First off, There’s a guy named Ishmaa'ily Kitchen playing meaningful snaps in DT for the Lions this year. Injuries suck. However, this defense held Matt Forte, known Lion slayer, to 24 carries for 69 yards (nice), a tune of 2.9 YPC. Also impressive was holding him to 20 yards receiving on 3 catches. Forte is known for his impressive work in the pass catching game, and the Lions neutralized him for the most part. What’s more impressive, is that they were doing this with guys named Ishmaa'ily Kitchen, and someone whose been cut and signed so many times it’s a running joke. (Aside: I love Fluellen. And he played well last game).

You read that correctly. 13 of Forte’s 17 carries in the 2nd half and OT went for 2 yards or less. I’m going to take a look at those 13 carries and see what went right for the Lions. Having not seen it again yet, I remember being impressed with Reid and Tulloch in run defense the most. Let’s take a look! 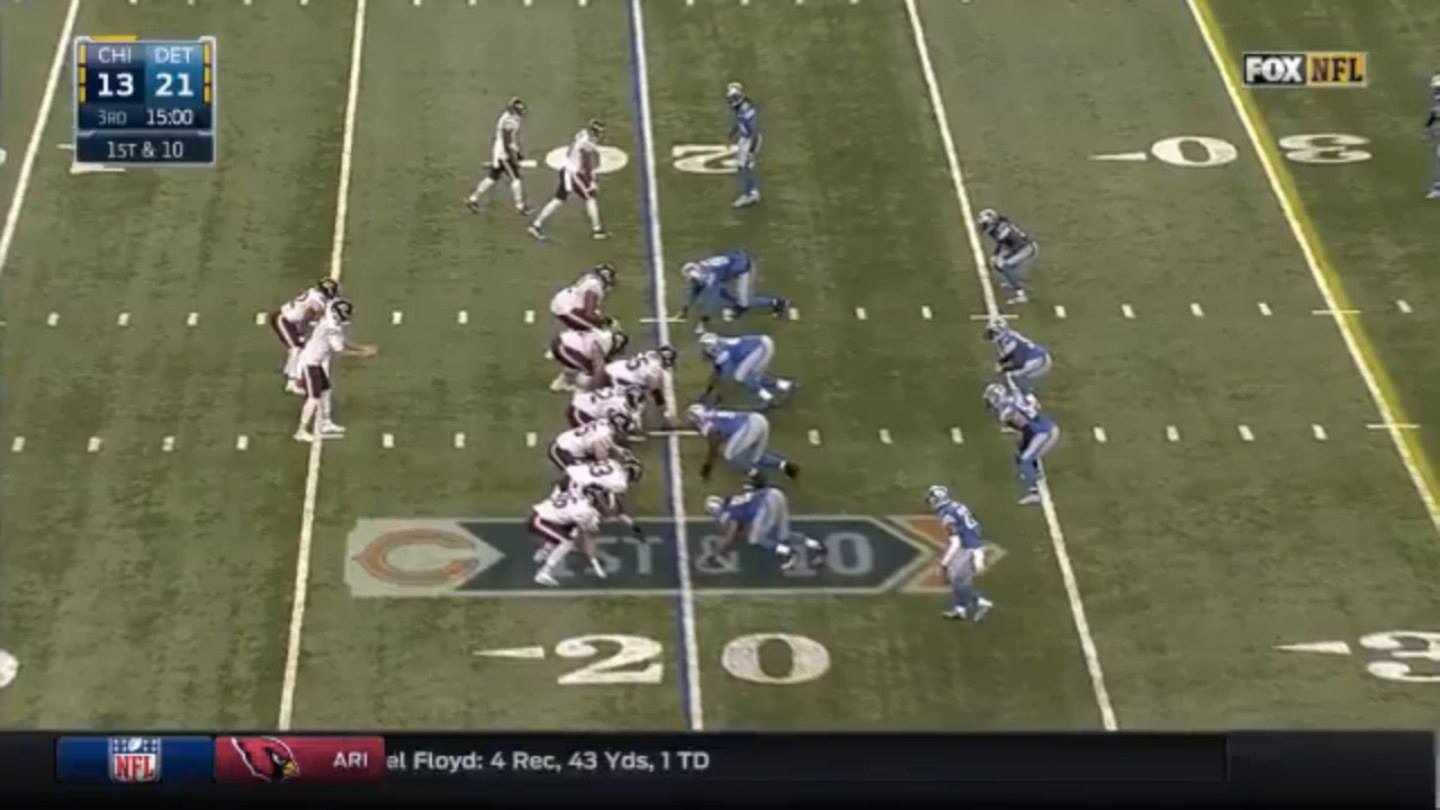 The first play of the 2nd half the Bears come out in the shotgun as the Lions counter with a 4-3 look. Reid is initially doubled with Flu, but as both the Bear’s Guards go to the 2nd level to engage with the LBer’s, Reid sticks an arm out in Forte’s path and slows him down measurably. Travis Lewis is mostly unblocked, and he comes in late and finishes the play. Reid gets most of the credit here. 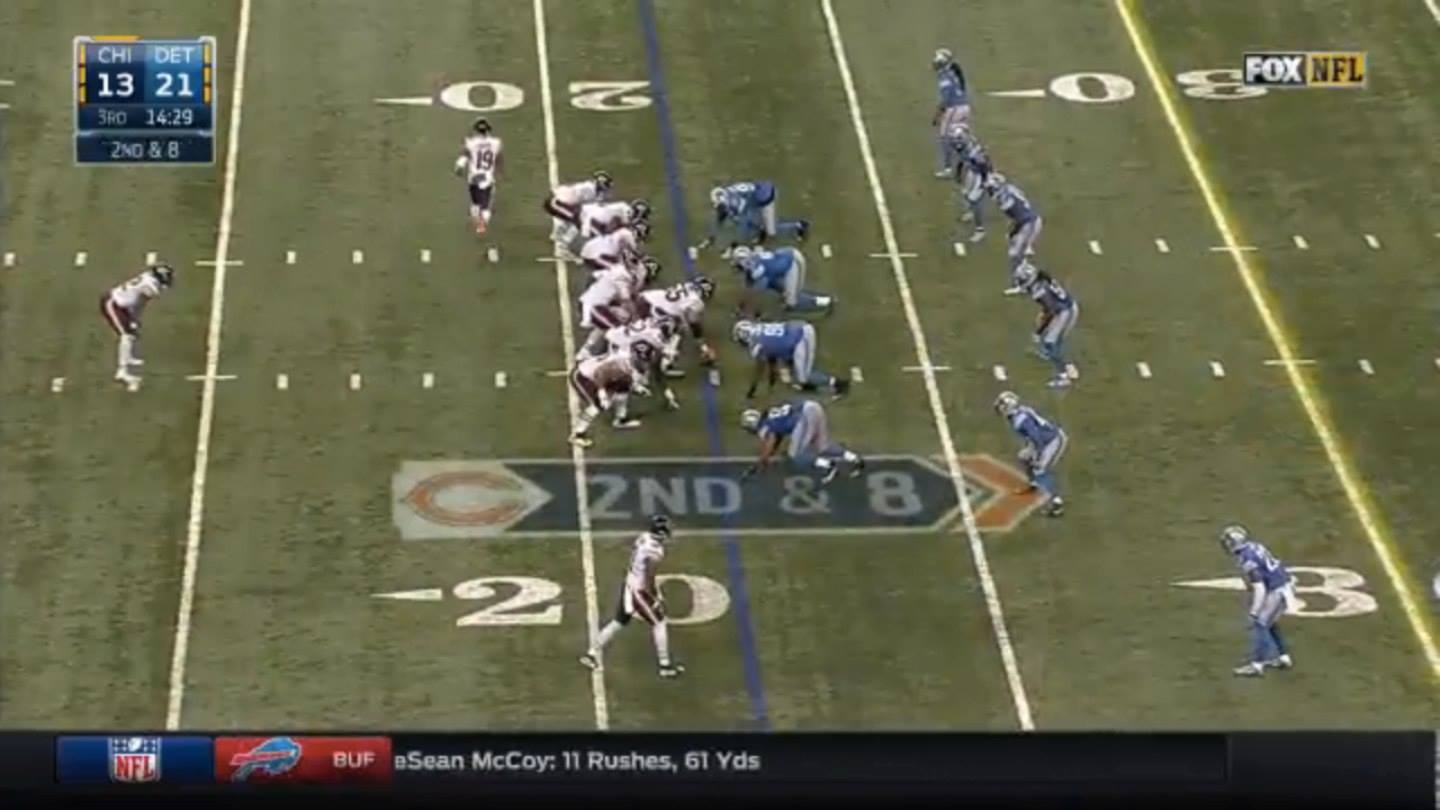 The 2nd play the Bears run is a single-back set with 2 TE’s on the left side, and motion from a WR to the left. The Bear’s RT, C, and LT engage their blocks right away, as their RG, LG, and two TE’s attempt to block the Lions’ 3 LBers. The Bears run a stretch left as Tapp is run away from, taking him out of the play. Where the play breaks down, is when the Bear’s RG tries to take on Bynes in the 2nd level. Short story, Bynes blows right past him and tackles Forte for a loss. The Bears had this play executed to perfection otherwise. Forte probably gains 10+ yards here without Bynes imitating Levy. Solid effort. 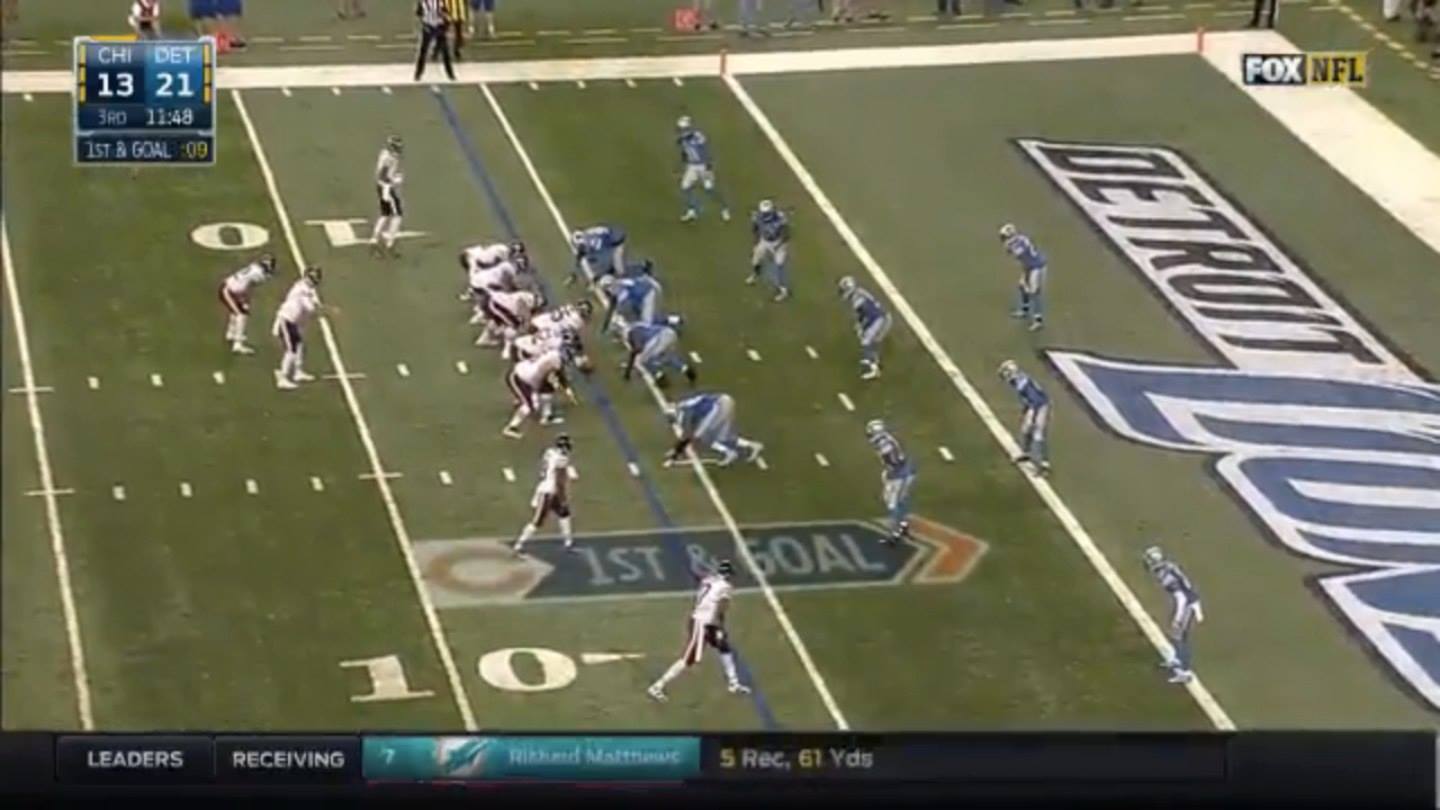 The Bears line up in the shotgun again and hand it off to Forte (Linehan? Is that….no…..). The Lions are in a nickel alignment, so the call makes sense in a way. The play breaks down when the Bears Center attempts to get to the 2nd level and engage Tulloch. He and their RG initially block Flu, who somehow slips the C’s grasp and allows Tulloch to have a free shot at Forte while the C was on the ground. Tulloch makes the tackle, but Flu probably deserves more credit. I’ve watched this play 5 or so times, and I can barely figure out what he even does to shed the C’s block. The C ended up on the ground so I suppose Flu just threw him down. We’ll go with that, cause Flu is awesome. 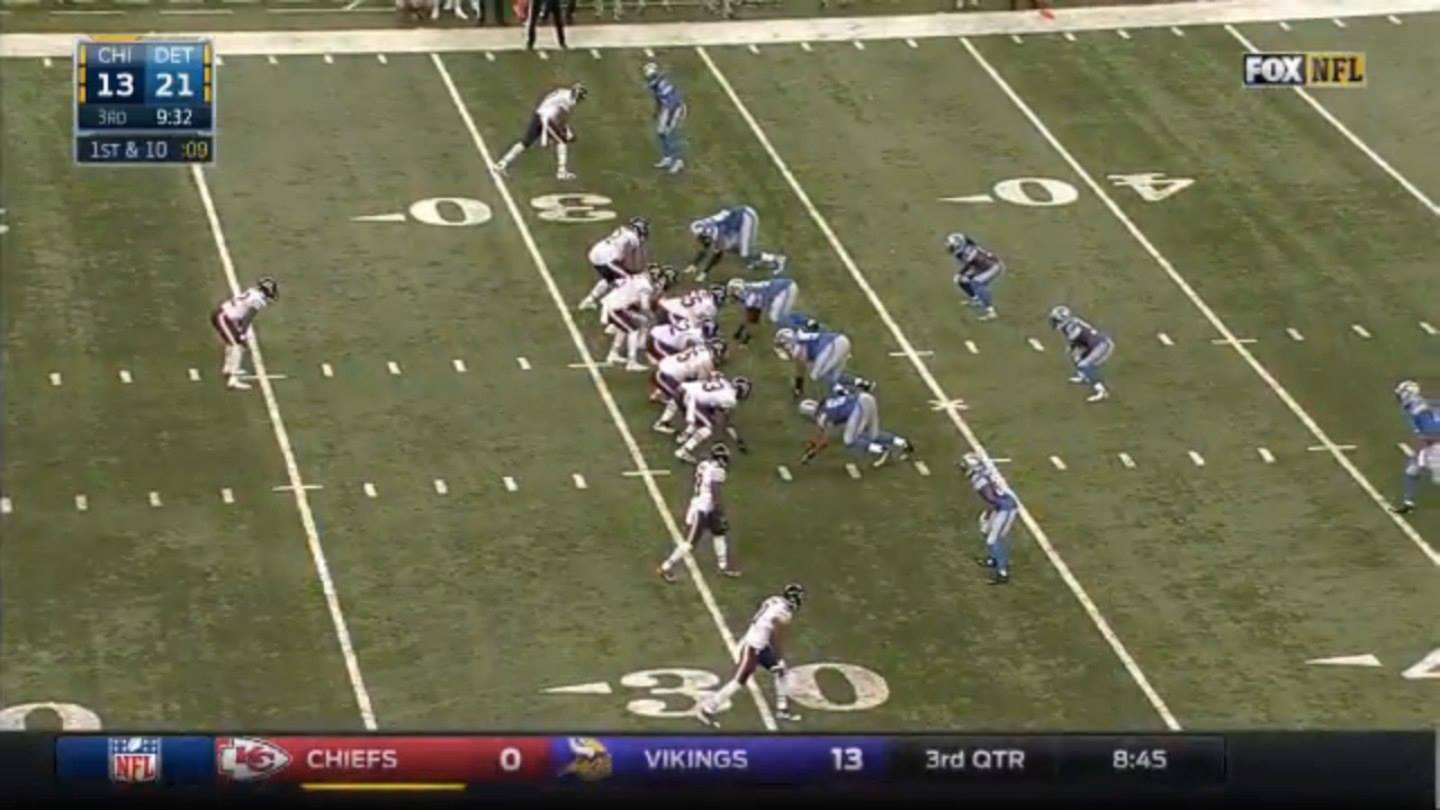 The Bears line up in a single-back set again, with one TE on the right and 3 WR’s. The Lions line up in the nickel with Bynes and Tulloch as the 2 LBers. The Bears run a stretch to the right, while their LT leaves Ansah unblocked to attempt to block Bynes at the 2nd level. Their C and RT also pull to the right after the snap, leaving Kitchen and Wright unblocked as well. Wright gets an initially jump after the LG completely whiffs on a cut-block, but Bynes is the story again. The Bear’s LT doesn’t get a good enough jump to cut off Bynes, as he saw the play develop the whole way. It doesn’t help the Bears that Kyle Long (RT) didn’t touch a single player on his way up the field. Bynes made another Levy play. 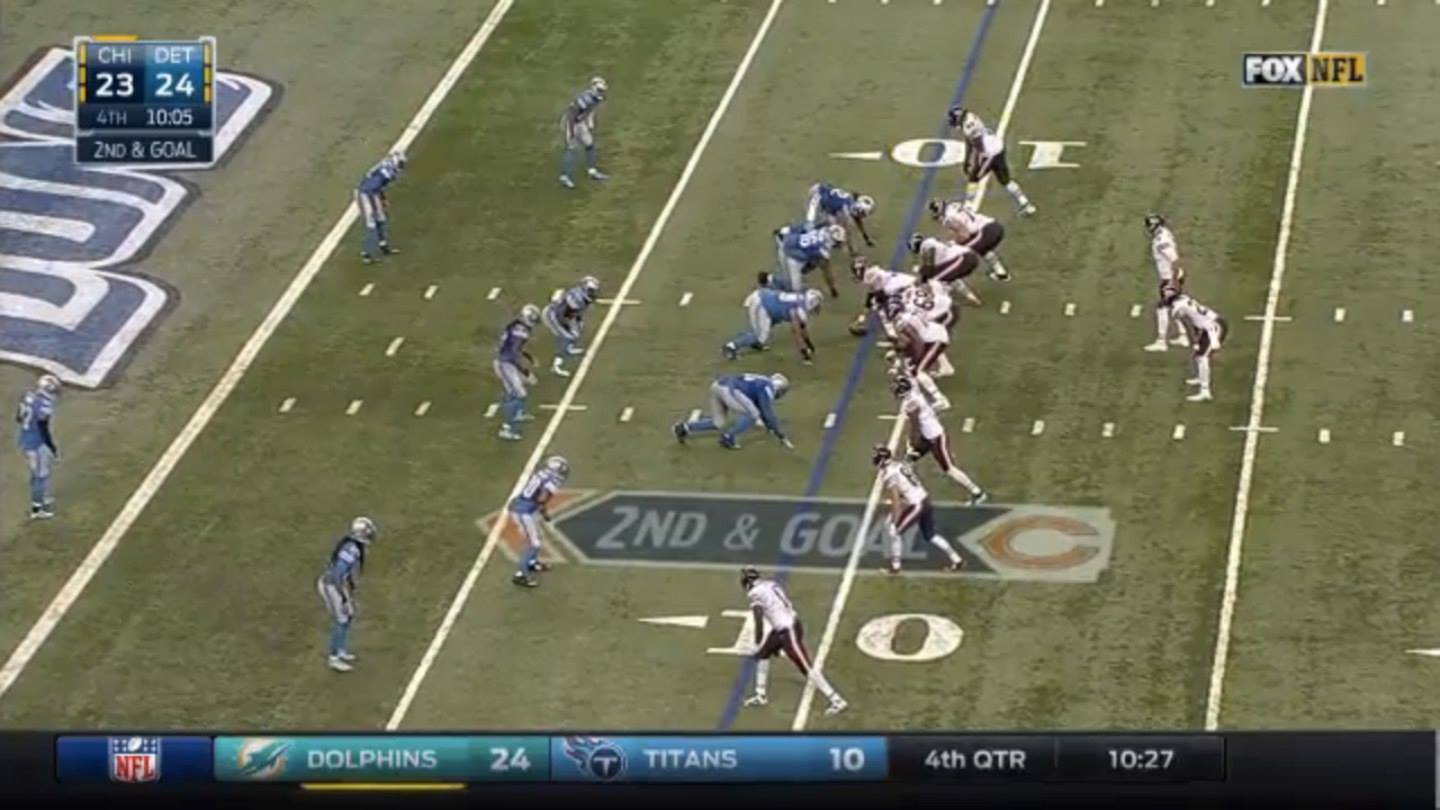 The Bears are in the shotgun, 4 WR’s and 1 RB. Lions are in the nickel again, Bynes and Tulloch as the LBers. This one is on the Bear’s C for the 2nd time, and it’s not close. They run a simple shotgun hand-off as the C looks to the 2nd level to find a LBer to block. Problem is, the C simply watches Tulloch blow by him and make good tackle. This was a fun play to watch over and over again. Their C looks like his feet are in quicksand. I will give Tulloch some credit for making a professional look that bad though. 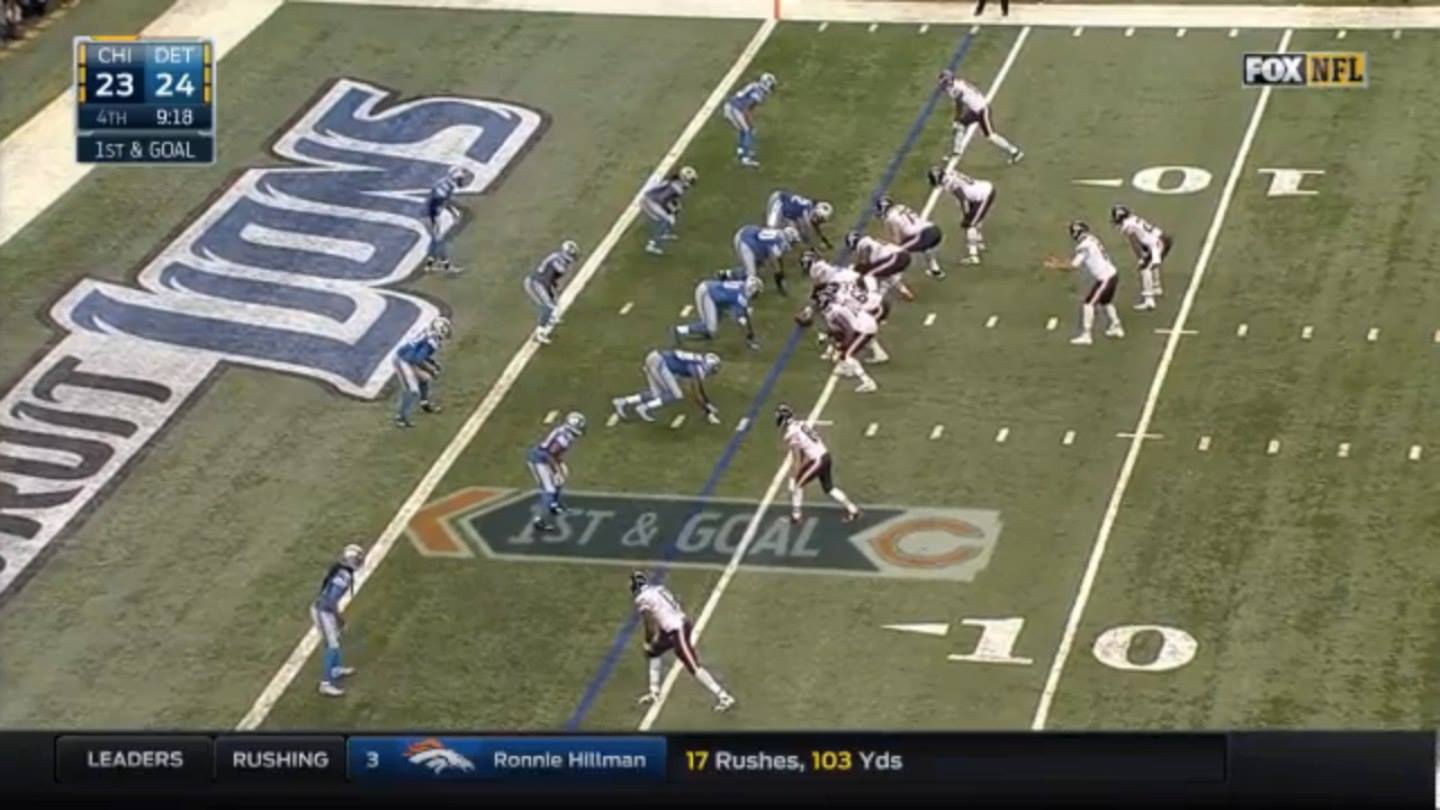 So the Bears get a gift holding call in the endzone on Bynes, and end up with 1st and goal at the 4. They line up in a shotgun formation (yes, again) and hand it off to Forte. They have Bennett in as a TE on the right of the line to assist. The Lions are in a nickel formation again, but IAQ is playing just behind Tulloch to his right, acting as a 3rd LBer. The Bears leave Tapp (playing LE) alone as their TE goes to block Bynes. Quddus recognizes the run immediately, and goes to tackle Forte, while the Bear’s LG has trouble with Reid one-on-one and Reid helps close the tackle. What is interesting here, is that the Bears are doubling Wright. He gets absolutely obliterated and pushed into the end zone, but it’s odd to see Reid get single covered and Wright get the double. 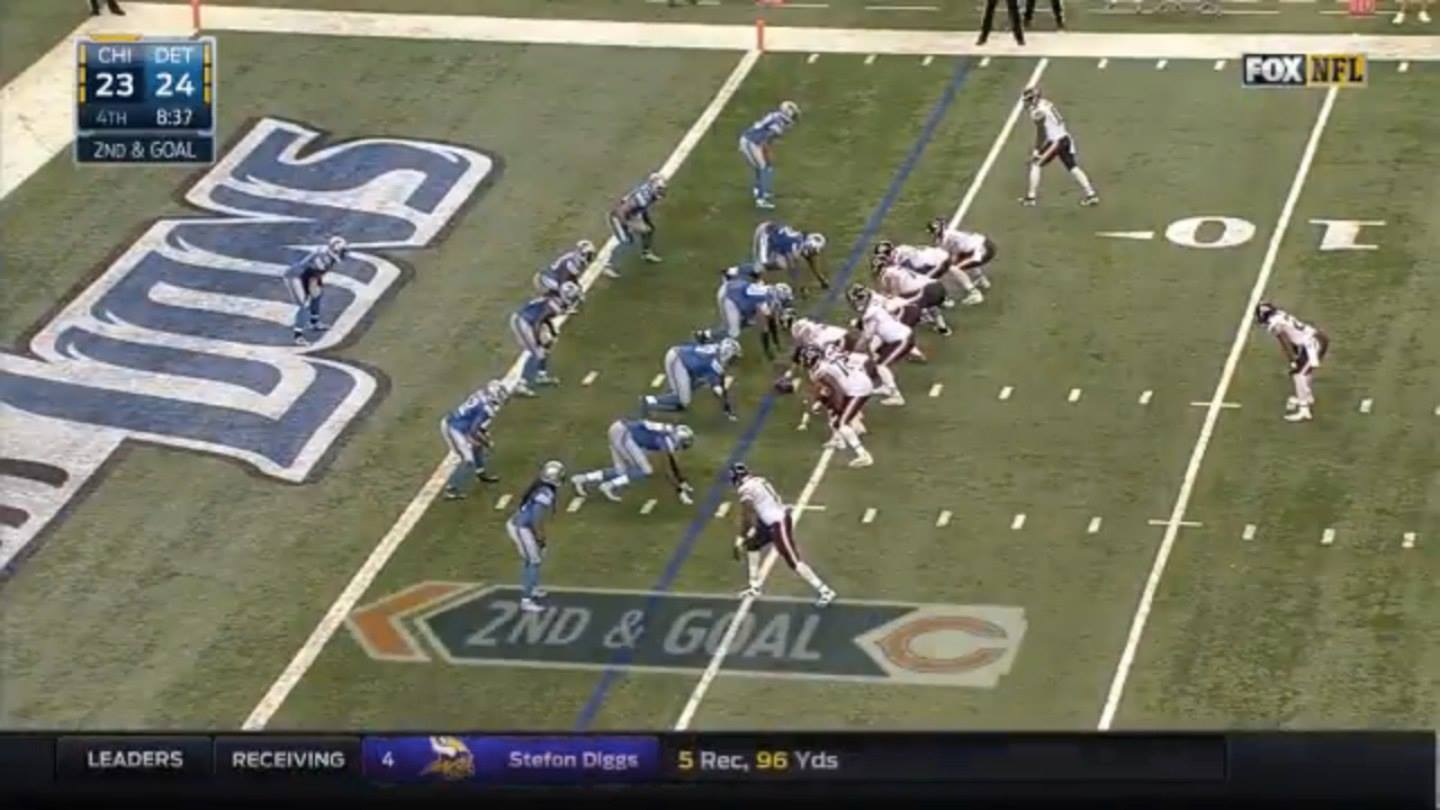 A single-back set this time, with two TE’s lined up on the right of the line. The Bears run it this way (as they have all game thus far) as the Lions counter with a 4-3 look, with IAQ playing again as an extra LBer. Kyle Van Noy is in this snap, not Travis Lewis, and he actually makes a decent play. The Bears do a good job at chipping the left side of the Lions Dline as the play runs right, but Wright and Tapp get off the line quick and render the pulling G useless. Forte runs into Tapp, and Van Noy reads the play well, and shoves the blocking TE back to finish off the tackle. Tapp ultimately will get credit, but Wright and KVN deserve some praise too.

Play 8: Well, it was only 2 yards but it ended up a TD. So no credit to give here, but it still technically counts as a 2 yard gain or less. Hooray? 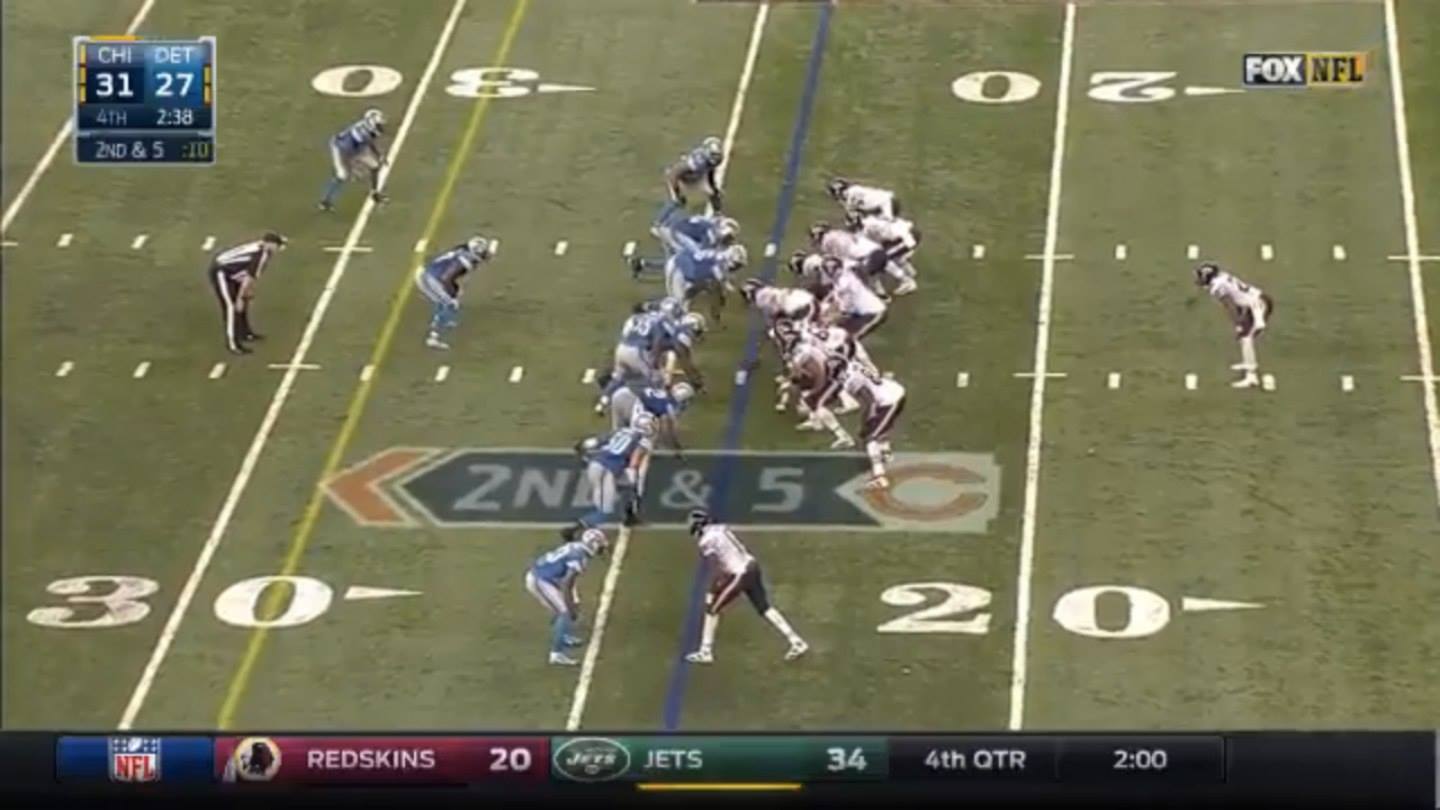 Bears come out a single-back formation with 3 TE’s. Two are lined up to the right, one on the left. They run Forte off the C and RG, as the Bears use their RG and RT to block Fluellen. Similarly to what happened to the Lions in San Diego, as the Bear’s RG is attempting to get to the 2nd level to block Bynes, Fluellen sticks his right arm out and grabs his jersey, allowing Bynes to make a clean tackle. It’s a little shady, but it’s worked against us a few time more than I’d like to remember so…good play from Flu and Bynes. 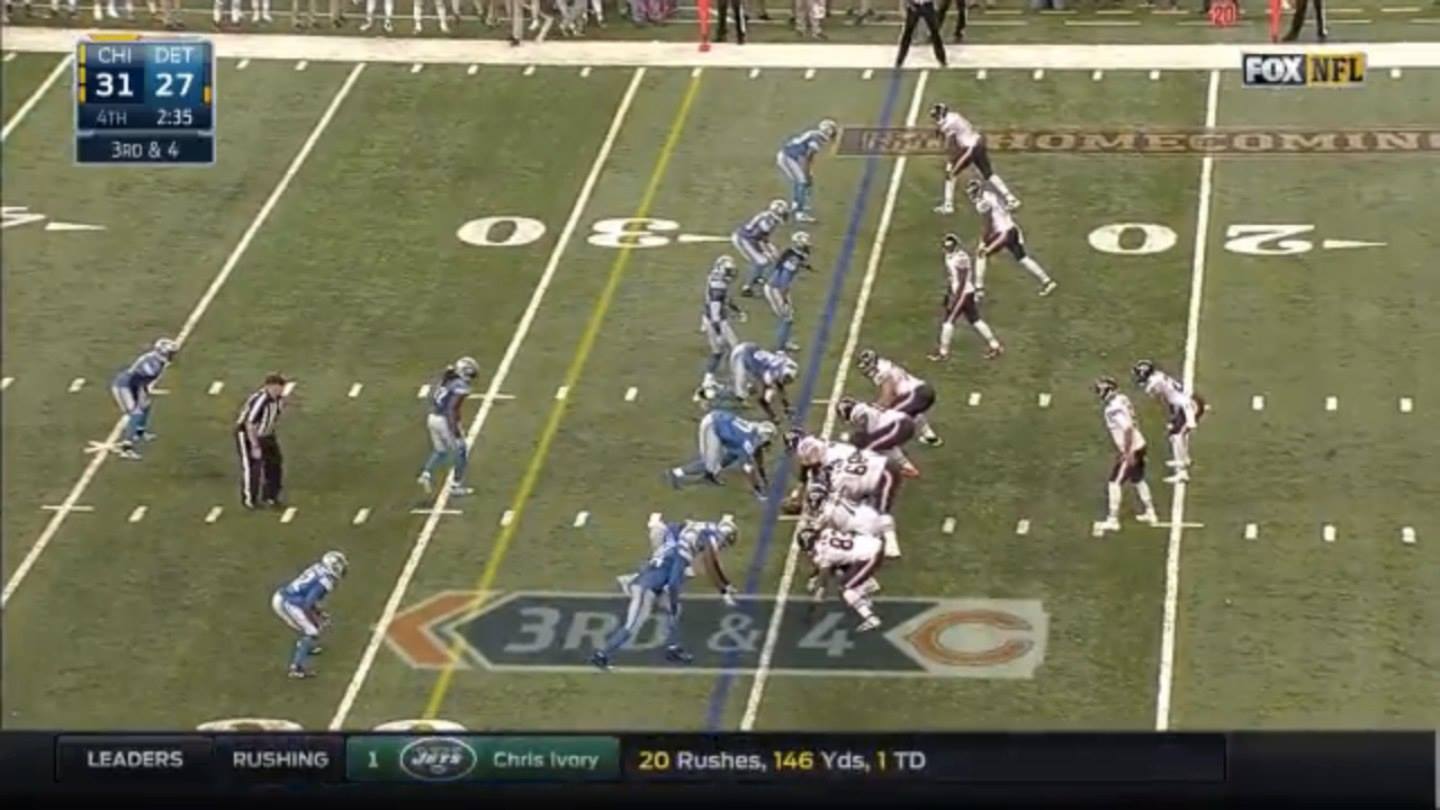 The Bears attempt to throw off the Lions by bringing in 3 WR’s in a shotgun formation, looking as though they might throw to pick up the first down. The Lions counter with a nickel look with 3 down linemen, but instead of Tulloch, they put Whitehead in, who is clearly a better cover LBer. The Bears run off the C and LG this time, but Reid manhandles the RG and Forte has nowhere to go. Ansah was unblocked and also got his arm in the tackle. And in somewhat shocking news, Brandon Copeland (I had to check his number a few time) was in, and was also in on the tackle. This was a huge stop, and Reid almost did it all by himself. I wouldn’t be surprised if he sees more double-teams if Ngata stays out for long. 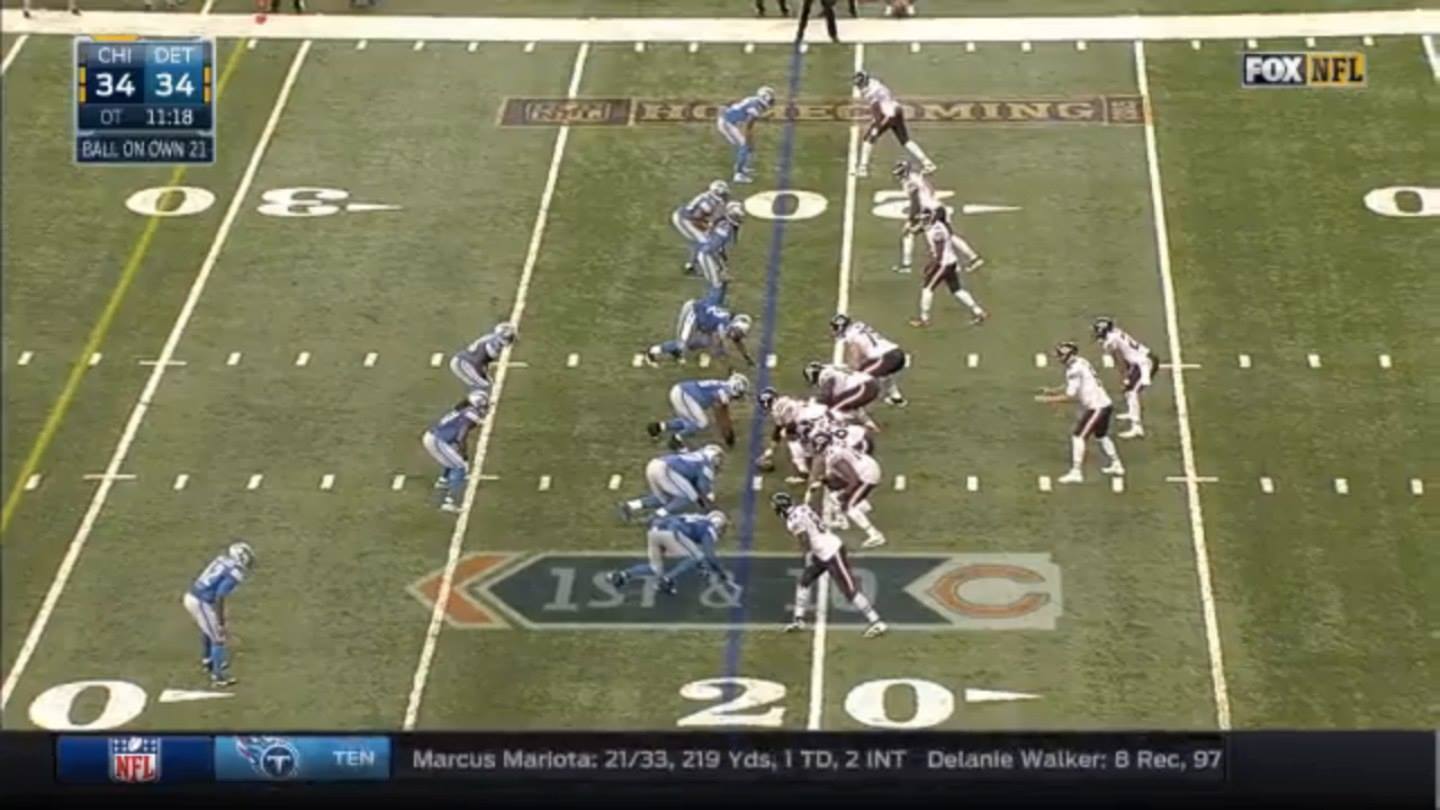 Don’t laugh, but the Bears run it from the shotgun again, this time with 4 wideouts. The Lions counter with a nickel look as usual. They try to run Forte off the left side of the C-LG, but Flu and Reid don’t move and inch. Forte runs into them as he’s trying to search for a hole, and Tapp comes in unblocked off the left for the tackle. Reid and Flu made this play stop dead though. 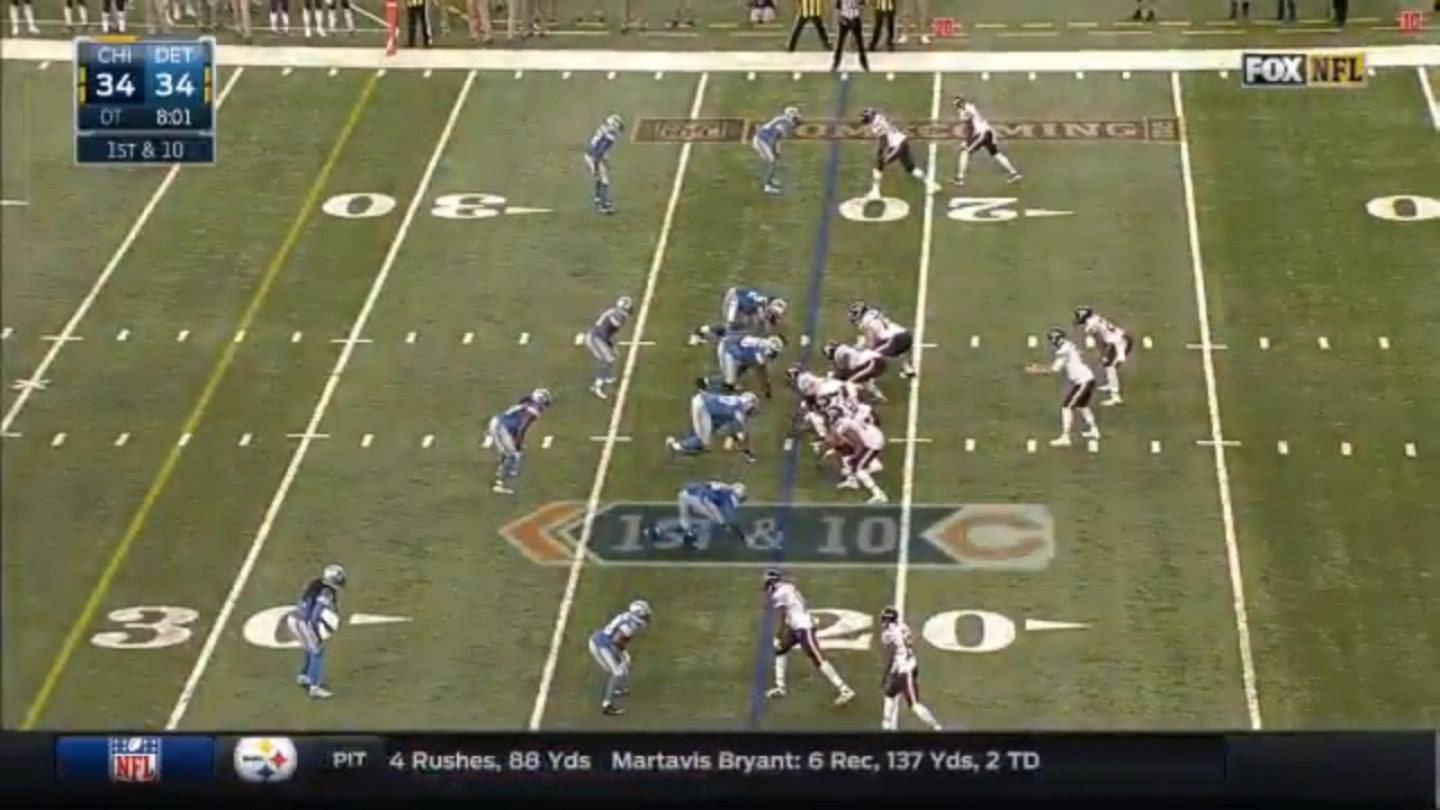 Seriously, don’t laugh, but the Bears run it from the shotgun again, with 4 wideouts out, uh…wide. All 4 are outside the numbers, as they attempt to spread the Lions defense out. Well, it doesn’t work here either. Again, Fluellen is doubled and he juuust maybe grabs a jersey again, as Tulloch flies through the hole Flu created. Still, Fluellen warded off a double team to get half a tackle, so credit where credit is due. Tulloch also made a nice tackle on the play too, and has been noticeably faster at getting to where he needs to be on running downs. I’d be fine with him on 1st and 2nd down going forward. 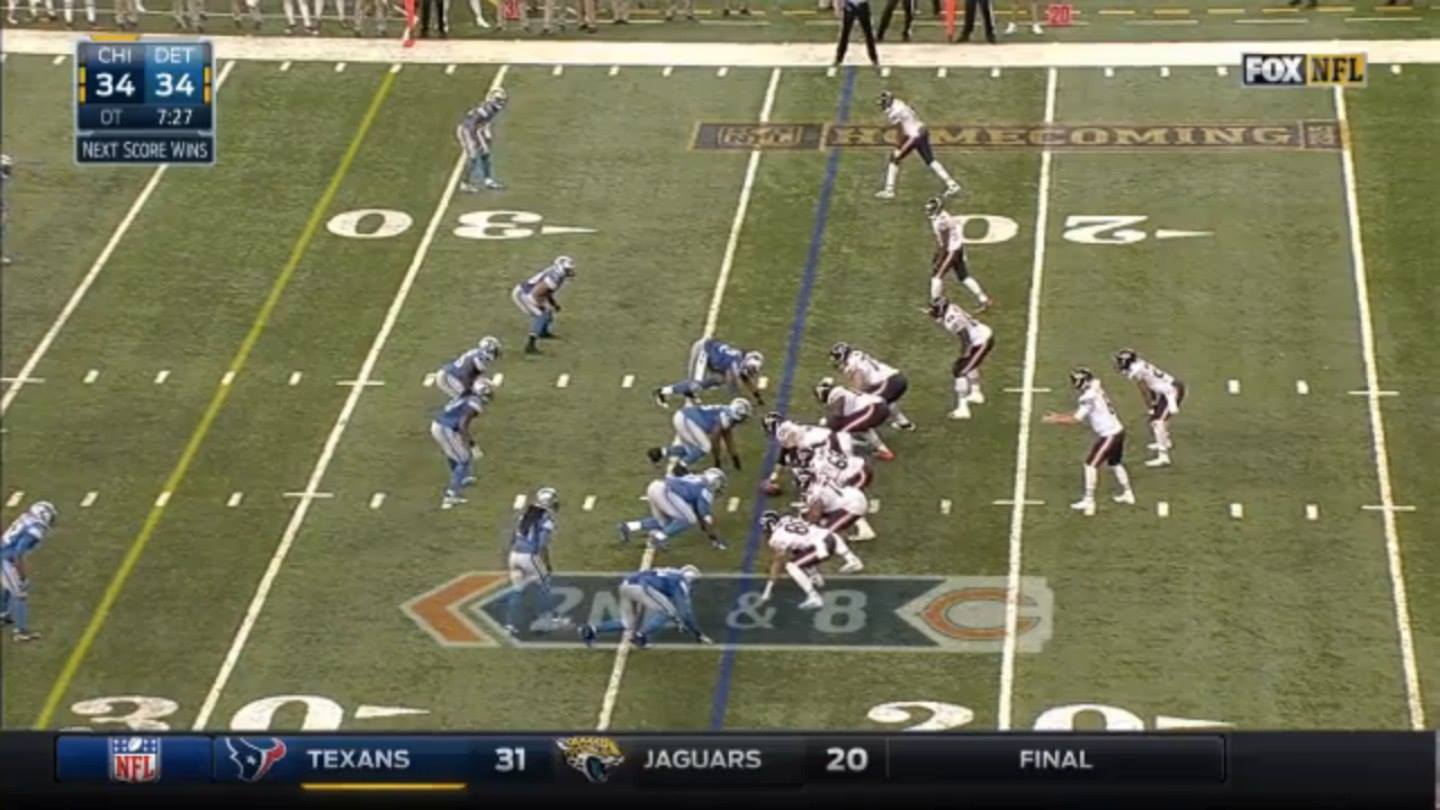 Ok guys, go ahead an laugh. The Bears run out of the shotgun yet again, with two TE’s on either side and 2 WR’s. The Lions counter with a 4-3, with Bynes, Tulloch, and Lewis. The play initially goes to the left, but as soon as Mathis sees the TE and block Ansah, he goes for the RB, forcing Forte to bounce it to the right. Tulloch is there to force him to go wider, and just as he starts to gain some momentum, Slay slices in and trips him up for a gain of just 1. The whole team gets credit for this one, as the Dline stood firm, the LBers forced Forte outside, and the CB’s made the tackle. Excellent work all around.

For how well the Lions did against Forte, a lot of that had to do with them running the ball out of shotgun. There were a few instances where Forte gained 8-10 yards with a FB in front of him or in a different set. However, the Lions did force their hand a few times, and ultimately played very well in the 2nd half, especially considering they were down 4 starters. I ended up impressed with Fluellen and Bynes more than I thought at first, and Reid and Tulloch did have good games as well(at least in the 2nd half). Without a bad holding penalty on Bynes, his PFF scores probably look better.