What's interesting about this play is that almost everything is window dressing on the fundamental action going on inside. As long as you have an alignment and pass patterns that spread the field to give the post runner open space to work in, it doesn't really matter what kind of mix of elements you throw in. That is great because you can make this look like almost any other play except in the eyes of the linebackers you are working on inside. 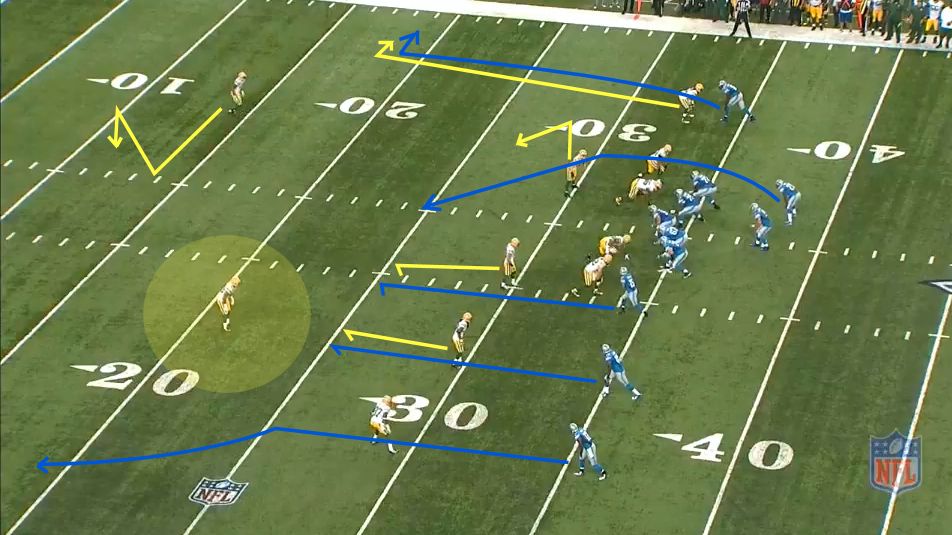 Detroit goes trips left with 12 WR Jeremy Ross, Ebron, and Tate lined up from the outside. Ross goes vertical while Ebron and Tate carry their guys away from the underneath area with deep comebacks. On the right side, Calvin goes outside release on a deep out route to clear out the cornerback. Green Bay defensively is in 2 Man Under, with safeties playing over the tops of each side and everyone locked up in man coverage up the stems.

With most of the formation to the left side of the ball and Calvin getting his guy to turn and run, the entire right side is open space to work in. This leaves Reggie one on one with 50 LB A.J. Hawk, who he beats easily. Although the Green Bay DL stunts and almost gets to Stafford, the angle route is too fast for them to beat.

This is what we mean by coverage mismatch of linebackers against our backs. 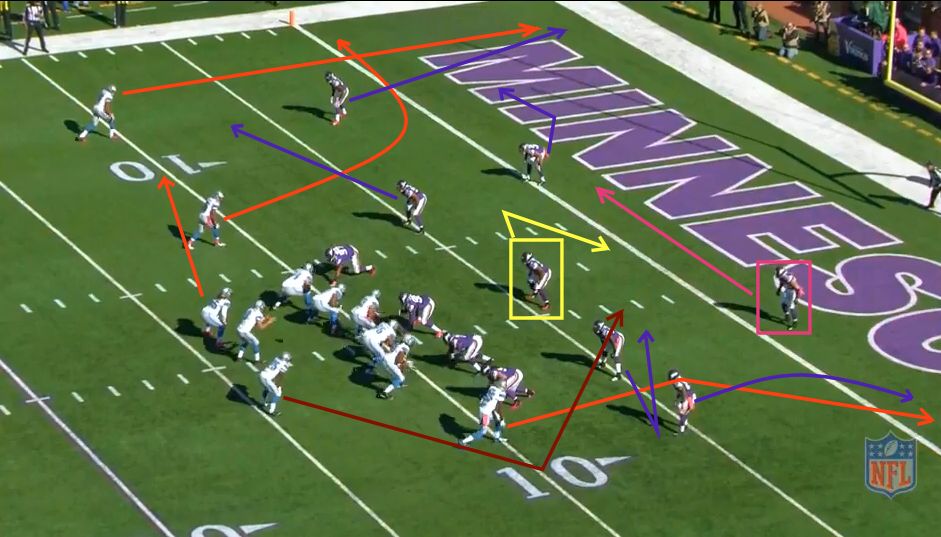 This is a good example of how pretty much anything can be the window dressing. On the left hand side we have a Flood combination with 10 WR Corey Fuller running the vertical, Tate on the intermediate out, and 45 FB Jed Collins in the flat. On the right hand side, Ebron clears out the perimeter with a corner route. Notice how 50 LB Gerald Hodges bites hard to the outside for Riddick (route in brown) to beat him inside; once you run enough combinations like Curl-Flat, Flood, Flat-7, etc. that have a flat route component, the linebackers start trying to anticipate the flat.

Now just look at the reaction by the defense as a whole - everybody, and I mean everybody sells out to take away the Flood side. Just look at 54 MLB Jasper Brinkley (boxed in yellow in the route diagram) and 22 FS Harrison Smith (boxed in pink in the route diagram). What the hell are these guys thinking? The answer is that Matthew Stafford dragged them out of the picture with his eyes:

Stafford gets the snap and looks left to the Flood side... one two three BANG, back foot hits and he's coming back right to Riddick. Not the prettiest throw, and the TD had to withstand a challenge that the runner broke the plane (it did), but this is clearly the work of a quarterback who knows what he's doing and feels the flow of the play.

Last year we had 21 HB Reggie Bush and 25 HB Theo Riddick, who are both considered very good catching the ball out of the backfield. This year we have Riddick and now 21 HB Ameer Abdullah, who is also quite good catching the ball. Although he hasn't been used in this capacity much, 46 FB Michael Burton has shown in the past he has excellent hands. We have used these types of plays, but not as frequently as i'd like to sustain drives, and almost exclusively in the red zone for some reason. For example, the touchdown at the end of the game in San Diego:

All of the elements of the classic F Post play are there: both wideouts run stems up the sideline to keep the defense spread out and occupy the safeties, while Ebron on the other side of the tackle box breaks slightly outside to influence the inside help over to his side. Riddick has a one on one against 50 LB Manti Te'o and gives him a fake to the outside before exploding inside. Stafford was tracking Theo the whole way on this play, so it was indeed designed to be an F Post style throw. 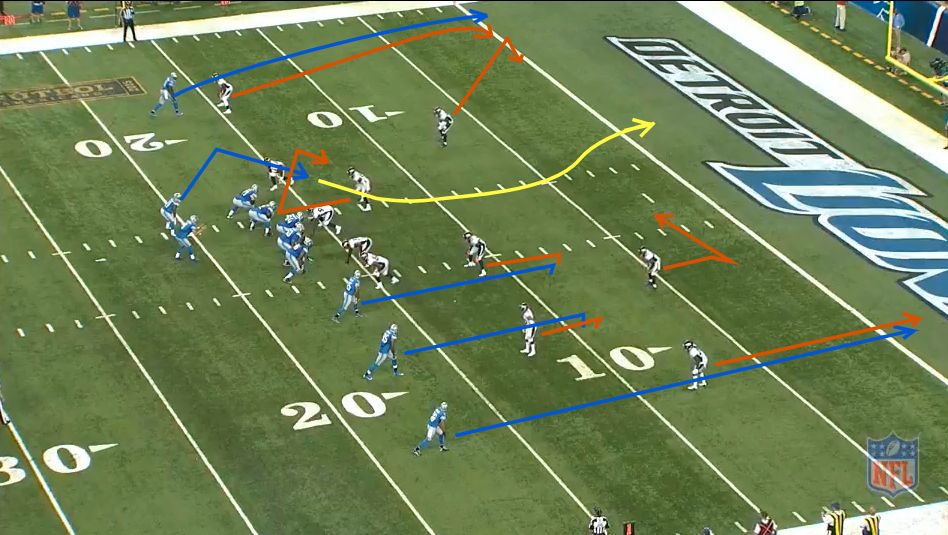 The Lions are down 14-6 but driving from great field position thanks to a fumble recovery by Quandre the Giant. We come out trips right with 16 WR Lance Moore on the outside running a vertical, Ebron and Tate next to him running curls, and Calvin by himself on the left running a vertical. If this seems familiar, scroll up and look at the Reggie Bush play against Green Bay last year.

Denver fakes a blitz with 54 OLB Brandon Marshall backing out into coverage on the releasing back. Abdullah is able to cross his face, though, and makes him miss for a big score on a quick throw by Stafford evading pressure. Notice that Stafford makes the completion while backing away from the rush off balance, which is impressive and again indicative that he knows what he's looking for on the route.

Zampese is emphatic in his clinic about how the entire hot series of F plays consist of throws that are extremely easy to make for the quarterback. They are short throws, and so more difficult to intercept. At one point, he goes off about not needing perfect form: if the ball gets there and turns into a touchdown, who cares if it's a perfect spiral? You can have a perfect spiral with great form and velocity, but be off target and incomplete. He jokes that the pass with ugly throwing form that turned into a touchdown will later be hailed as a "great throw" but the other is a forgettable incompletion.

The F series type plays, whether F Cross, F Flat, or F Post, are a good fit for the Lions personnel because it works the ball to playmakers in space. The ball is only thrown about 6 to 7 yards, but often turns into big gains because the pass catcher can make a man miss. Reggie Bush, Theo Riddick, and Ameer Abdullah are exactly those types of playmakers. I like the screen game with these guys, but this adds more tools to get the same kind of effect.

Next time we'll look at what the defense might do to take the Quick Post/Angle away and how wrinkles can be added to the route and read to defeat these adjustments.