Before we start talking about this next series of plays, let's examine what the offense is trying to do with a play fake. Defensive players must react quickly to some kind of key - usually the behavior of the quarterback, offensive line, or running backs. When the quarterback acts as if he is going to hand the ball off and the running back acts like he is going to take the ball and run it into the line, defenders start flowing on instinct to get in position to make a stop in the run game. 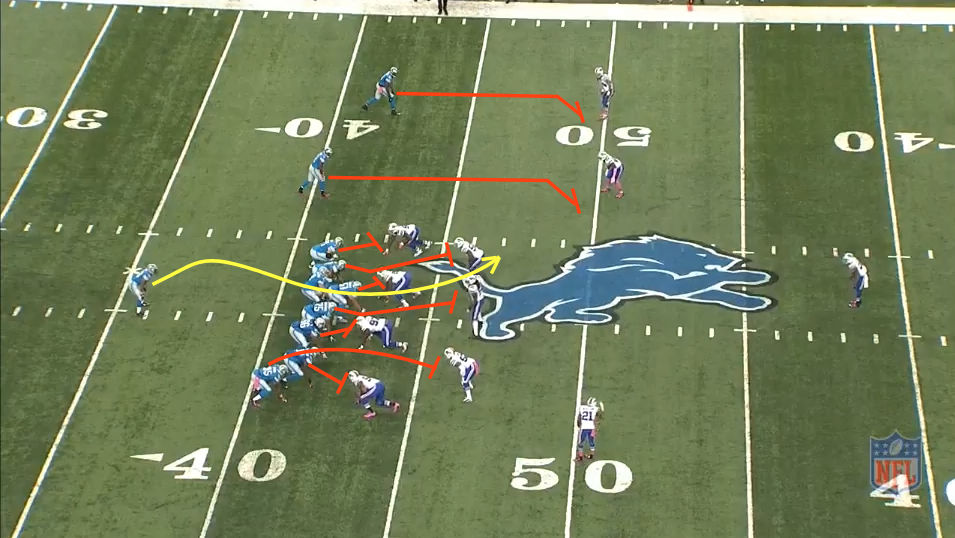 From a single back set with two tight ends on the right side of the line, the Lions pound it up the middle with 38 HB George Winn. Winn cuts it back behind 51 C Dominic Raiola through the right A gap for 5 yards, but what we're interested in here is the reaction of the defense. 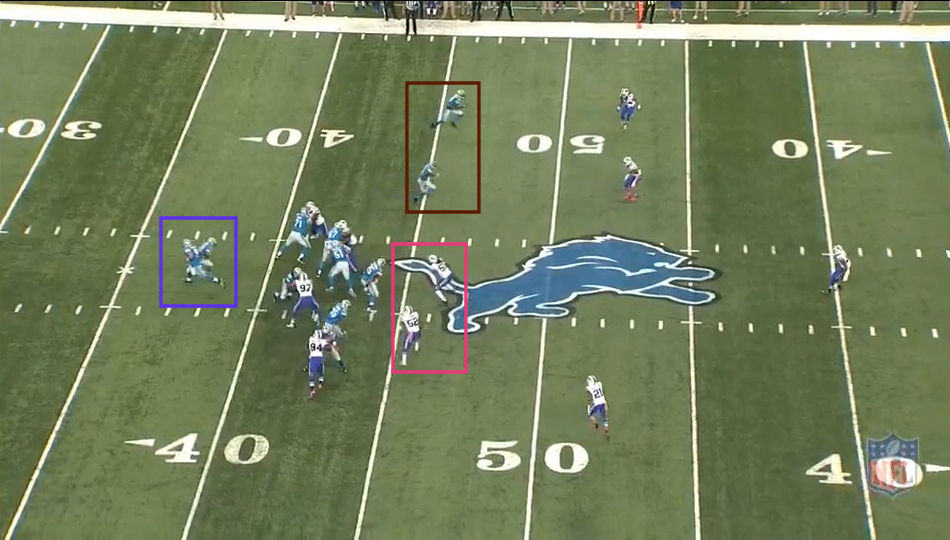 9 QB Matthew Stafford takes the snap and turns to hand off; here we've frozen it at the mesh point where the ball changes hands in the purple box. Two notable things here are also marked. First, the linebackers are sliding sideways down the line to stay in line with their assigned run lanes: 52 LOLB Preston Brown and 51 MLB Brandon Spikes are boxed in pink. 56 ROLB Keith Rivers also slid over, but has already been engaged by 67 LG Rob Sims.

Second, look at the position of the two wide receivers boxed in brown. 81 WR Calvin Johnson on the outside and 12 WR Jeremy Ross in the slot are both pushing upfield and are already even with the depth of the linebackers by the time the handoff occurs. Both wide receivers break inside like they are running post routes, but end up turning to block the defensive backs in front of them. 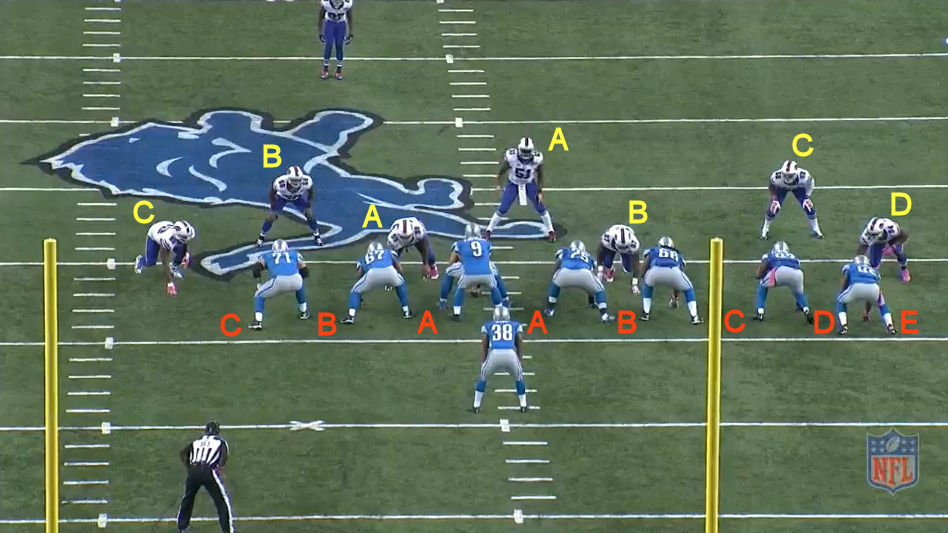 Taking a look at the formation from behind the Detroit offense, we can see why the linebackers slide over. The double tight end formation has eight gaps that need to be accounted for by the defense in order to be "gap sound." The natural assignment of who is going to be responsible for which gap based on alignment is indicated by the corresponding yellow letter above each defender in the front. There is no edge defender on Detroit's right side in the picture for the right E gap because 21 CB Leodis McKelvin is offscreen with no receiver in front of him, and is therefore taking responsibility as the force defender. 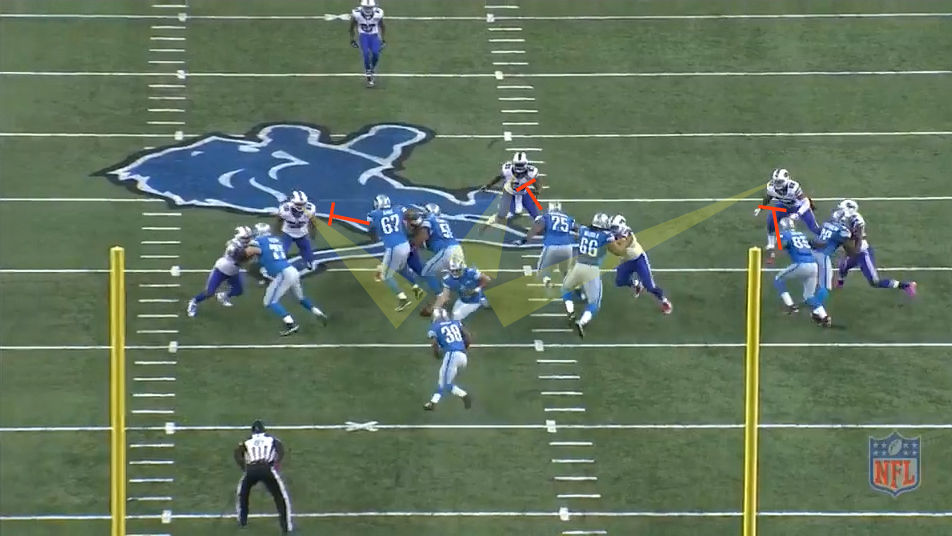 This angle shows us the linebackers all watching Stafford hand the ball off to Winn. As the offensive blockers move, the gaps move with them: defensive players assigned to those gaps must either attack their gap at the first level (defensive linemen) or slide over to stay in front and control their gap at the second level (linebackers and safeties). The second level guys must shed the blockers coming for them and fill the gap to make a tackle. 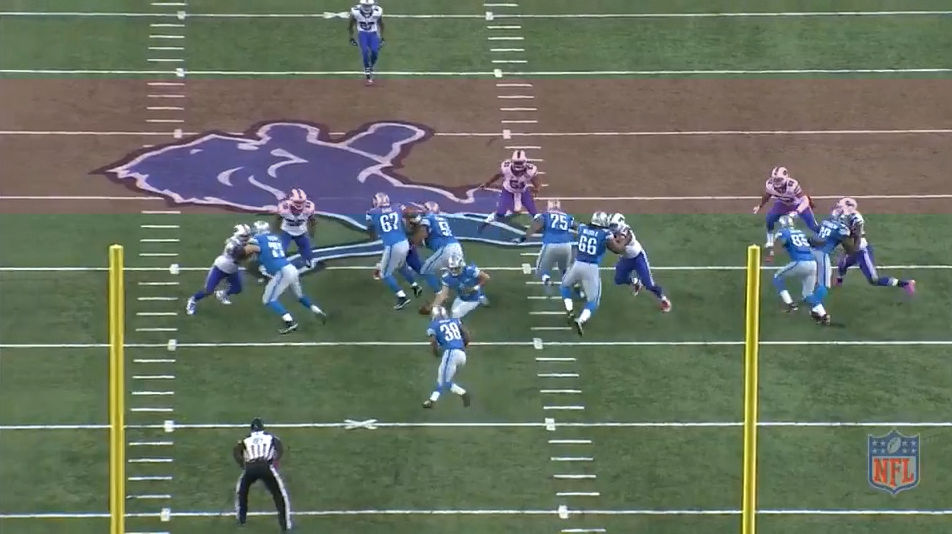 Now look behind those linebackers. The ball is not yet handed off to the runner, and everyone is crowding the line for run support. The pink shaded area between the linebackers and deep centerfield safety is the kind of open space that play action exposes. When linebackers and box safeties read run and stay up near the line in anticipation of playing their gap assignment, they leave broad empty spaces for receivers to work in.

This play diagram comes from Bill Walsh's 1982 San Francisco playbook. The play calls for the offense to load up in a heavy formation (here, they are in 12 personnel with one back and two tight ends) and force the defense to read run defense by actually pulling offensive linemen in run action rather than simply flashing play action.

The point is the Niners sold the run hard with both personnel and action, and only put two receivers into the pattern: only Dwight Clark and Freddie Solomon would be running routes, and Joe Montana was really only looking to throw to one of them. This is why Walsh put all those notes on the diagram - the right wideout is running a clearout route to pull the safety help really deep. If Montana sees the deep man in single coverage and thinks he can get a good shot, he can take it as an alert throw. The left wideout is instructed to cut across the field and stay behind the linebackers. Montana pulls the ball back and has to watch for pressure and can roll right if needs to. The backside tight end may release late into the flat to give the quarterback a three level flood look.

The main thing to see in the diagram, however, is the explicit instruction to throw the ball away if it doesn't develop. Montana is looking to throw to the Z Cross coming across the field quickly; San Francisco is counting on the heavy run threat to take the defense off guard.

The following breakdowns show you the 2014-2015 Detroit Lions version of this play. I believe it is the best play in the entire playbook, bar none. 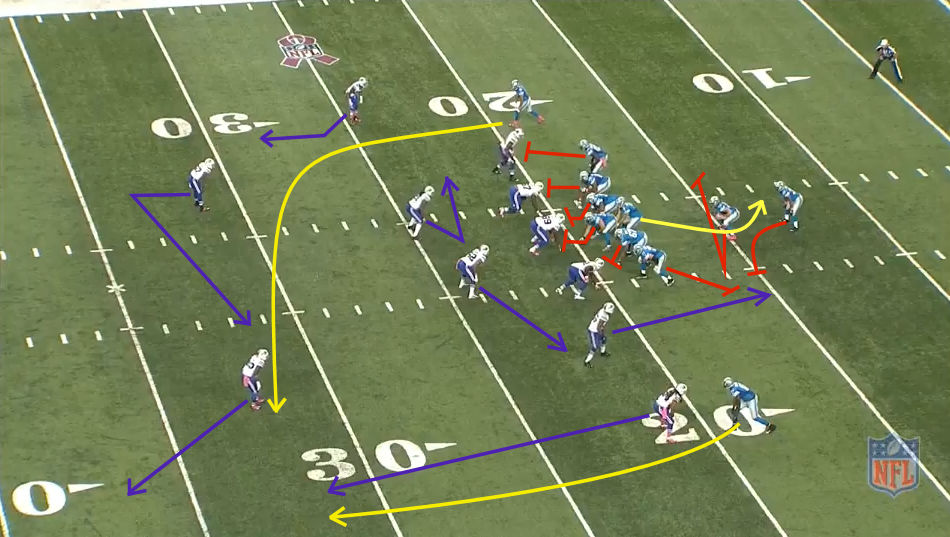 Detroit comes out on the first offensive play after halftime in a standard I Formation set: 87 TE Brandon Pettigrew shifts over from the right slot to settle in-line next to 66 RT LaAdrian Waddle, and the backs are 45 FB Jed Collins in front of 38 HB George Winn. The wideouts are 15 WR Golden Tate to the right and 81 WR Calvin Johnson to the left.

Defensively, Buffalo counters with heavy personnel of its own: the two men standing up outside the three down linemen are both defensive ends. Standing up in front of Pettigrew is 91 DE Manny Lawson, and the free rusher on the opposite side standing up is 55 DE Jerry Hughes. Behind this front, the Bills are in 2 Man Under. 23 FS Aaron Williams takes the half over the top of Calvin while 37 SS Nickell Robey has the deep half in front of Tate.

9 QB Matthew Stafford takes the snap here and fakes a handoff to Winn on what appears to be an inside lead zone play. Both linebackers between the hashes initially flow with the backs to the fake side, but once Collins reverses to provide backside pass protection, his man coverage defender 51 MLB Brandon Spikes also reverses field. 52 OLB Preston Brown continues to mirror Winn in case he releases, but instead Winn helps 71 LT Riley Rieff block the upfield rush by Hughes. 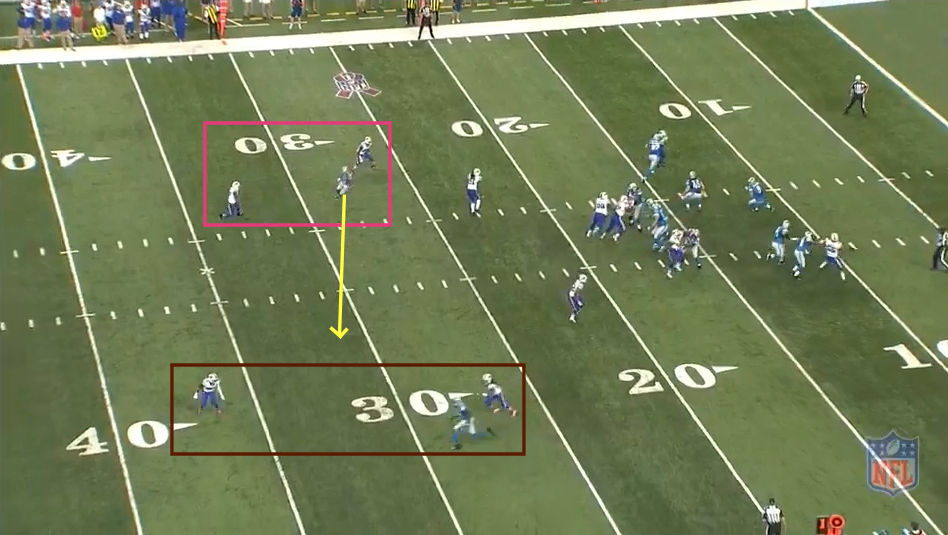 When Stafford whips his head around to locate his receivers, he first needs to check on Calvin streaking down the sideline. In the brown box, 24 CB Stephon Gilmore is chasing Calvin with his back turned to Stafford, clearly in trail man coverage. Williams has his eyes locked onto Calvin, expecting to have to take over for Gilmore as the route pushes deep.

That initial look at the deep safety on the left side in front of Calvin simultaneously tells Stafford what Tate is going to run his route into as he crosses the field. In the pink box, Tate gets carried through the underneath zones by 21 CB Leodis McKelvin. As he breaks inside, Robey has to take over for McKelvin. The problem for Robey is that Tate gets to watch Robey's depth and can break his route across Robey's face, ensuring he has inside position on the crossing route.

The pull on the linebackers to hold them shallow plus the vertical threat of Calvin Johnson streaking deep clears a huge space for the crosser to run into. As long as Stafford hits the crosser in stride, this is a potential big play.

Lining up both the deep and intermediate reads gets the ball out very fast. The play design gets the defense going one direction thinking run, then in the other direction thinking bootleg or backside flat throw, and then actually slams them down the field in the original direction. Looking straight between the hashes, Stafford has a nice direct throw and hits Golden Tate for a 25 yard gain here. 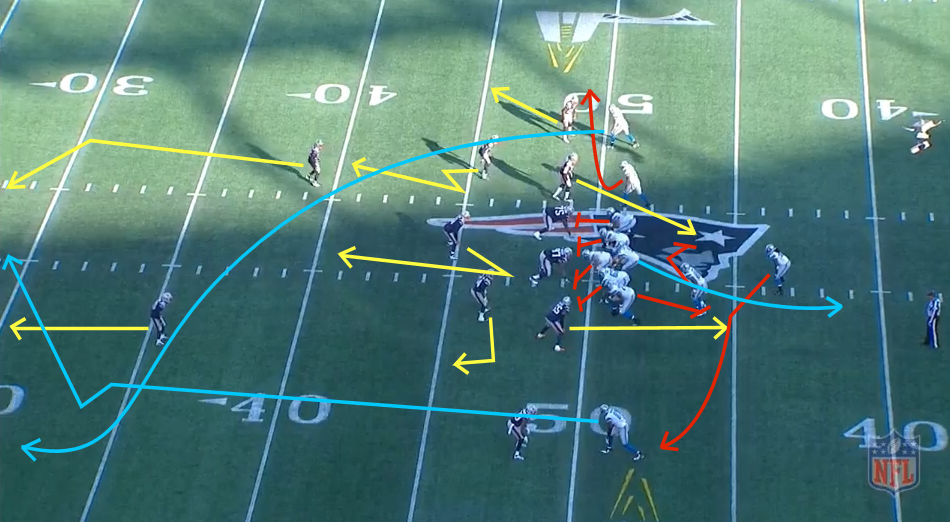 At the start of the second quarter near midfield, Detroit lines up bunch right and at the last minute shifts 85 TE Eric Ebron over to a Strong I Fullback position. 12 WR Jeremy Ross on the right side chips the stand up pass rusher before releasing to the flat, and 35 HB Joique Bell does the same after the play fake on the left side. The Patriots are playing a pretty standard Cover 2. The guy who bites on the play action here is 91 OLB Jamie Collins. 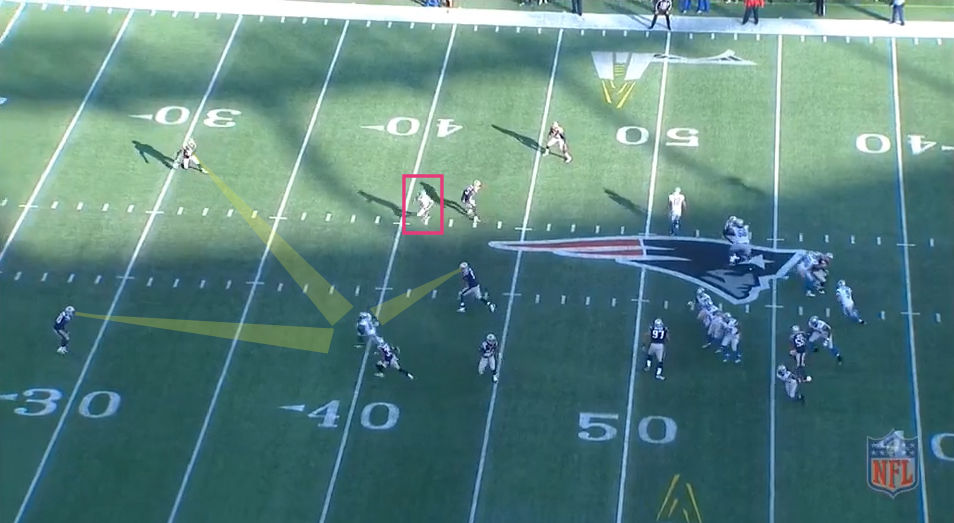 When the ball is snapped, the linebackers flow with the line to Detroit's left. Once Collins realizes Bell doesn't have the ball, he turns around and scrambles to try and get back into coverage. This shot taken after Stafford pulls the ball around to look downfield demonstrates the "Calvin Johnson effect." Both safeties plus Collins are all worried about Calvin running free, meaning four players (including 39 CB Brandon Browner, who is running with Calvin down the field) are locked onto Megatron.

Who is picking up 15 WR Golden Tate coming across the middle?

Watch the three deep defenders after Calvin breaks to the post. Then look at poor Collins get turned around trying to locate Calvin and then failing to find Tate coming from the other side in time to do anything.

Stafford steps up to avoid 50 DE Rob Ninkovich (blocked by Ebron) and makes a hell of a throw off balance. Somehow, he hits Tate in stride with nothing but arm for a huge 42 yard gain.

Does it work only because we have Calvin and Tate?

The quick answer is no. The design of the play is what makes this work, and not specific personnel - having both Calvin and Tate make it a lot more dangerous, though. Here are two examples of Detroit running the PA Z Cross without at least one of them on the field.

Detroit is in 22 personnel with 45 FB Jed Collins, 35 HB Joique Bell, 85 TE Eric Ebron, 87 TE Brandon Pettigrew, and 84 WR Ryan Broyles on the field. Everything about this personnel set and formation screams inside run given the down and distance.

Untouched when he went to the ground, Broyles got back up and added extra yards for a nice 21 yard reception. Running the vertical clearout? That's Ebron. The best part of the play is 39 CB Antonio Allen falling down as Ebron blows past him in the bottom right corner:

Instead of running Ebron down the field and crossing someone like Tate underneath it, the Lions flip the field. Calvin runs the clearout vertical and Ebron comes across the middle from the double TE set for a 13 yard gain. Stafford actually made a poor throw here, considering the rush had been picked up pretty well. Hitting Ebron in stride would have almost certainly gone down inside the ten yard line and possibly a touchdown.

This play is about as good as it gets for the Detroit playbook. It can get a fast slot receiver the ball in space cutting across the grain of the defense for huge yards after the catch. We have the ideal guy for such a role. If we want to throw a changeup at the defense using the same concept, we drafted a guy that should be ideal for that.

The success rate running PA Z Cross must be something ridiculous, because it is extremely easy to find chunk play examples. It's a remarkably fast hitting play action pass that gives Stafford a great complement to the power run game. The play is versatile in that it can be run from a lot of different looks, both formation and personnel-wise.