By now everyone following the Lions is aware of the problems the team is having protecting Matthew Stafford. What I want to do here is really break down a good (bad?) example of why the Lions fanbase is fearing for Stafford's health. This fanpost breaks down all elements of a single play that resulted in this:

After taking a monster hit, Stafford is holding his chest while on the ground.

Dude gets up, but you can visibly see him favoring his throwing side as he grimaces up to the line for the next play.

Now, keep in mind... this was the third offensive snap for the Lions. I am pretty sure this contributed to whatever they examined Stafford's ribs for, and probably affected him the whole game.

Obviously, everything I used for this video and image wise is from NFL Game Pass, which I cannot recommend enough. Greatest thing since sliced bread, now that it comes with All-22.

This is a variation on the play you see below from Payton's offense. The routes are not exactly the same, but the idea is very similar. This play comes from the two minute section of the offense, but can easily be used as a regular no huddle play. The route combinations are:

The modified version being run by the Lions here has the X and Z positions reversed, with Calvin Johnson on the right side running a curl and Lance Moore on the left side running the deep post. Golden Tate is your slot man working underneath. The original is four wide (100 personnel) but we have Eric Ebron lining up as a flexed TE to be the weird fast big guy who is almost a WR mismatch. Joique Bell is the halfback.

Here's what the formation looked like at the snap: 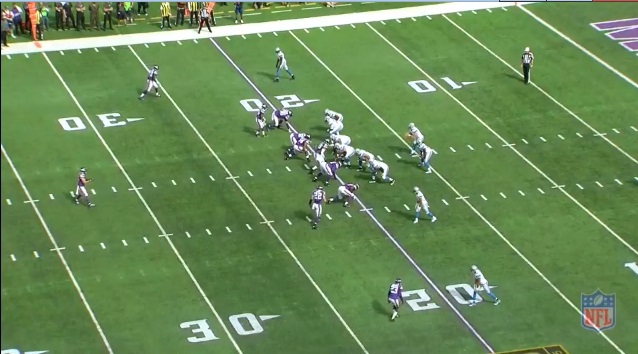 Okay, wait a minute! This doesn't look like the diagrammed formation! Where's the flexed TE? Prior to the snap, Tate goes right to left (not motion, but prior to setting), and the Vikings show blitz. The linebackers are all sugared up in the Double A gap look and both 24 CB Captain Munnerlyn (to the Lions' right at the top) and 22 FS Harrison Smith (to the Lions' left at the bottom in front of Tate) are playing games running up to the line like they are blitzing. This is a hell of a lot of possible pressure being brought with what looks like either a loose man single high or 3 shell.

Stafford checks at the line and motions for Ebron to move in-line against RT Lucas. Ebron and Bell are going to be held back in a "Solid" max protect blocking adjustment. According to Payton's SUB (shotgun) blocking, there is no A gap assignment and the center is supposed to identify who he considers to be the "weak backer." C Travis Swanson briefly points at the linebacker sitting in the A gap between himself and LG Manny Ramirez. Ramirez and LT Riley Reiff look at each other and confirm that Reiff will take the outside man 97 DE Everson Griffin and Manny will take the inside man 73 DT Sharrif Floyd. Swanson's identified weak backer is 55 LB Anthony Barr, and on a Lucky SUB adjustment, Swanson must be aware of a backside blitzer in case Barr drops back.

On the frontside, Ebron must seal the edge against the wide man 96 DE Brian Robison. RT Cornelius Lucas is on 92 DT Tom Johnson. Bell must scrape behind and should be accounting for the inside blitzer on a Lucky protection, which is 54 LB Eric Kendricks. In effect, Warford, Bell, and Lucas will end up playing a three man game against Johnson, Robison, and Kendricks/Munnerlyn (only one can blitz and still have coverage integrity behind the front) with Bell looking mainly inside since nobody has the A gap. 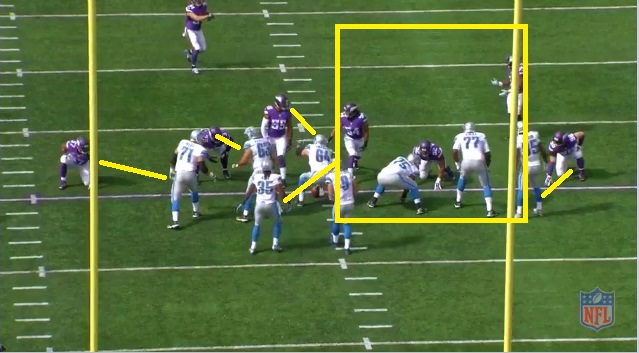 This means Stafford is going to have much fewer options in the passing game, but pre-snap he knows he has a very good look to the left. Remember that alert matchup? Detroit has Golden Tate lined up on FS Smith. That's a mismatch that Stafford wants to go to.

At the snap, both Kendricks and Munnerlyn on the strong side drop into coverage. Barr and Smith from the weakside blitz up the middle while Griffin drops on the edge. That leaves three rushers on the left side (Floyd, Smith, and Barr) and two rushers on the right side (Robison and Johnson). Five rushing = six in coverage. Munnerlyn and Kendricks drop as the man coverage guys accounting for Ebron and Bell.

Do we really have man coverage? You bet: 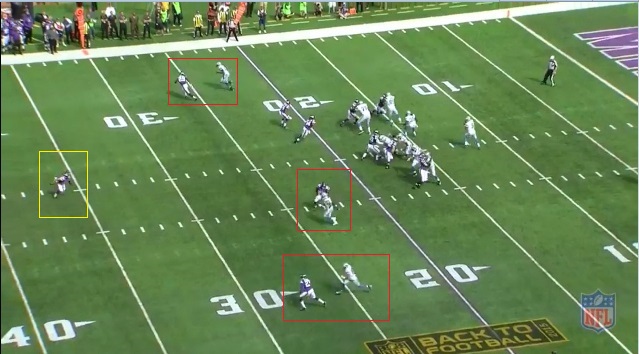 Boxed in yellow is the deep centerfielder SS Andrew Sendejo. Boxed in red are guys locked up in man coverage with Calvin, Tate, and Moore. You know they are in man coverage and not zone because they are turning and running with their man. The drop man Griffin, who is on Tate, is desperately trying to keep up with him to carry him up the seam to Sendejo. At the top of his underneath zone where Tate makes his break, he turns and Tate cuts behind him. 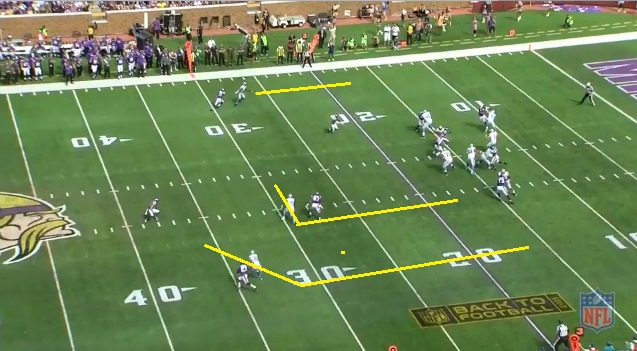 Forget Tate on a safety - this is Tate on a Defensive End. You cannot get a better mismatch than this. Stafford pounces on this - he is tracking Tate the whole way and launches it as soon as Tate is about to clear behind Griffin. This is the correct read and Tate does his thing for more yards and a big gain. Normally this is a win for the offense.

Even when we win, we lose. Stafford makes the right read against a perfect matchup, but ends up getting absolutely destroyed and probably injured on the play. What the hell happened? Remember the assignments from above and watch how the blocking unfolds:

First consider the Left side of the OL.

When Griffin drops off the left edge, Reiff no longer has anyone to block. Manny chases Floyd to the outside, widening the left side A gap lane between Manny and Swanson. Both Barr and Smith attack that gap, and Swanson makes a great effort to stall Barr first and then come off onto Smith. Warford fires left to help against Barr, so the assignments are all picked up - except Warford whiffs badly on the transfer to take over on Barr for Swanson. Barr pushes Warford aside and has a straight line to the quarterback.

Now look at the Right side of the OL.

Lucas and Ebron both pick up their assignments beautifully. Amazing, I know. But Bell scoots in and sets with his eyes on Munnerlyn all the way. Look a little up from Bell at Kendricks and watch him as he makes his drop. His head swivels to the left and he's looking back and forth between Ebron and Bell to see if either of them do a delayed release. Neither releases, so Kendricks' assignment changes to "get the QB." Bell is so focused on Munnerlyn that he doesn't notice Kendricks changing from backwards to forwards.

Now scroll back to the top of the page and feel Matthew Stafford's pain.

This is how Kendricks and Barr end up laying a massive hit on the quarterback. The route takes time to develop because Tate has to bend it around Griffin. Even if he's a much slower DE, Griffin is a big guy and you can't just throw at him. Normally, if Warford and Bell even sort-of pick up their assignments and give Stafford say a half second more, he probably doesn't get blown up.

Yes, Calvin is running a man beater route on his side of the field. The intermediate curl is exactly the kind of route you want to run against a Man Free look. So why isn't that a better throw? Well, for one, Captain Munnerlyn drops into the throwing alley between Calvin and Stafford, so there's no clear shot to throw at Calvin no matter what. Normally, if we hadn't been in max protect and Ebron ran a route up the right seam, Munnerlyn would have run with him out of the alley. At that point, throwing Calvin on an 8-10 yard curl is like taking a free first down. Instead, we have the matchup of the century with Tate on someone slower than Tate, so Stafford is absolutely correct in taking that.

The other thing to think about with Calvin's route is how long it is. The original play I used as the example from Payton's playbook has a Smash combo on the right side with the route corresponding to Calvin's alignment as a 5-6 yard hitch under the Y Corner. That's why it's the hot read - it's a fast developing route that the QB can check to and just smoke in there for free yards when he sees off man coverage (which we had here).

This goes back to the weirdness of the versions of plays i'm seeing out of Lombardi; where is the hot route here? Presumably Ebron wasn't going to run a Y Corner into the top of Calvin's route, but who is the fast developing dump off that Stafford is supposed to throw if protection really breaks down and he wants to throw hot?

To make the original play make sense structurally, Ebron's route should have been the short route - possibly a drag underneath, which would have set up a hi-lo with Tate over the middle. But if that's the case, why check to max protect and eliminate the hot route? I have no idea what Ebron's route should have been before Stafford moved him inside, but i'm guessing he didn't line call away from his own hot read.