Why Can't We Throw Deep? Coverage and Protection

A criticism being leveled against the Lions lately has been that Stafford is hardly throwing down the field to stretch out the defense. A variation on this complaint is that the Lions are not getting the ball to Calvin Johnson, and even when they do manage to throw him the ball it is on very short routes.

A couple of explanations (excuses?) are being given which make a lot of sense. First, defenses are taking away the deep passes - and yes, you could see the constant over the top help against Calvin Johnson at San Diego and the way the Vikings played a ton of man coverage, giving the nonexistent rushing attack the level of respect it deserved (hint: none). Second, the protection up front has been awful, and Stafford has no time to let the deep plays develop. Although he's only been sacked twice, that's a product of his awareness and quick release to get rid of the ball. It saves the loss of yardage, but not the awful toll being taken on Stafford's body.

It's not just the Lions who are hearing this. Chip Kelly's high speed offense with Sam Bradford at the helm in Philadelphia are getting the same complaints, and unsurprisingly have the same problems as Detroit:

In the Atlanta game Monday night, Bradford threw 52 passes. Only one of the 52 traveled more than 20 yards downfield. "That was more a product of what they were doing defensively," Bradford said. "After you go down 20-3, they’re not going to let you get behind them. They were playing soft underneath. You saw us take advantage of a lot of the quick stuff to the backs and underneath."

Bradford has a strong arm, but there’s more to throwing deep than that. There is pass protection good enough to allow receivers to run deeper routes. Kelly likes to get five players out running routes, leaving only the five offensive lineman in to pass block. In Atlanta, that resulted in a lot of pressure. Bradford was forced to get rid of the ball quickly, which translated to shorter passes to running backs and slot receivers.

Now, Bradford may not have as much of an excuse as Stafford, but the overall storyline is the same: defenses playing aggressively against the pass and protection breakdowns against the pass rush. Like Bradford said, if it's not there, you can't just force it. Even the best quarterback-receiver combination can get into trouble by trying to force the issue against defenses waiting for them to spring a trap.

"But if that's what they are going to do, I don't think you prove anything to anybody and say, ‘Even though they are back there, we are just going to throw the ball up.’ I mean, that's kind of silly to be honest with you."

Who ya gonna call? 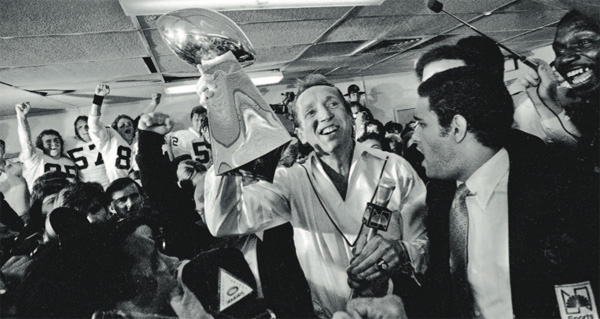 Al’s secret — and it is the same secret Gillman discovered and Walsh extended — is that the surest way to hit those deep passes is to consistently hit the underneath ones.

Obviously, speed gives a vertical receiver a chance to get behind the defense, but, even if he does not actually get open, he still stretches the defense, thus opening up the entire field. Speed distorts defenses, forcing them to cover wider swaths of the field, and thus exposing the weak defenders and the voids around them.

This is what Bradford's talking about: "They were playing soft underneath. You saw us take advantage of a lot of the quick stuff to the backs and underneath." I mean, look what Philadelphia did to Atlanta:

Hell, look what San Diego did to Detroit in week 1:

86% of the Chargers pass attempts were before the sticks, only attempted one pass over 20 yards and completed 4 out of his 5 passes between 10-19 yards. Reich implemented some beautiful play designs with some short drags, crosses and some screens all for effect.

Coryell gave Hart one order: Don't get hit. (Translation: Get rid of the ball.)

The offensive line is playing too poorly for Matthew Stafford to be holding the ball so damn long. He needs to get rid of it faster, which means shorter routes and faster developing plays. Like the San Diego game plan, this maximizes what our receivers can do best - get the YAC monsters the ball in space to do their thing.

And when we find something that works, FFS please don't get cute and HIT IT AGAIN.

One of the all time classic routes used to accomplish this is the quick slant. Both cram9030 and I love the slant (and skinny post - more on that in a little). Unfortunately, "we do all know Lombardi hates the slant, it must have done something terrible to him once upon a time."

Now, you might think "okay hold on... maybe it's just not a part of the Saints offense Lombardi brought?"

If you thought that, you would be wrong:

The slant route is perhaps the oldest route in all of football. It has always been an integral part of the short passing game from Sid Gilman to Don Coryell to Bill Walsh, and now to all of today's offensive geniuses; and among them Sean Payton is high on the list.

Payton has used the slant in many key situations over the past few seasons. In fact, it's been a go-to route on third-and-short or medium situations.

How it can help: The Read Slant

Slant routes are quick hitters that are basically unstoppable when run against loose man coverage - which Minnesota did a ton of against Detroit. As long as there is an open lane to throw the ball to the receiver (dictated by alignment), the quarterback is turning and throwing before anyone on the offensive line can get beaten. Here i'm shamelessly stealing from a defunct blog called Live to Win:

What exactly are we reading? The "Read" portion of this concept is based on the alignment of the defense and the rules are simple. First, is there a slant threat? Second, what kind of cushion am I going to get? From there the route develops.

Once the receiver aligns to start the play he looks for "access" to run his slant. 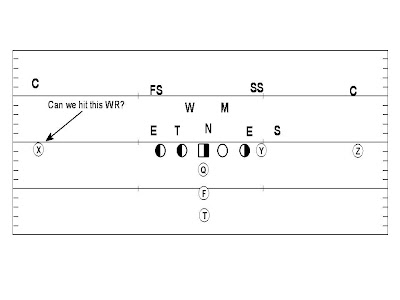 If there is no threat (like above) he will make the appropriate break on the route and run out the break while "throttling" down slightly to help the quarterback place the ball in the window. 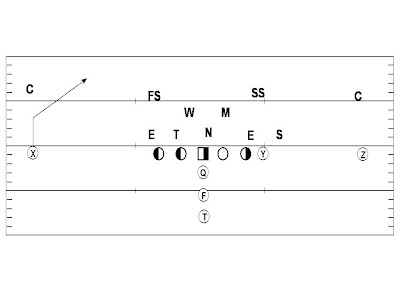 The alley is clear of defenders who can jump the route, and the quarterback has a lightning fast easy-to-complete throw. It gets his playmaker the ball on the run in space. Anytime the Lions come to the line and have a slant assigned to someone with a clear lane to Stafford, they can make a break across the face of the defender for free yards.

The Vikings game was a bit better. Lombardi decided that even if a slant route once slapped one of his kids, he'd let it off probation and actually make an appearance. Not a peep in the first quarter, but then in the second quarter the quick slant poked its head out of the playbook opposite the trips curl-flat-post combo as a backside hitter. Surprised the hell out of me - you can see it on the 10 yard curl pass to Tate (Calvin on the backside slant) and then on the 16 yard arrow to Ebron (Abdullah on the slant).

Slightly related to the slant is the Bang 8 route, also known as a skinny post. This is basically a slant with a longer stem (or a post with a flatter break - whatever). This is the route that put Michael Irvin in the hall. Same idea as a called or read slant - get spacing in front of a defender who doesn't know which way you're going and then break across his face with a timing throw already on the way.

Here's a nice example of Stafford seeing who the Vikings are blitzing and calling for a quick hitter into the defensive hole he knows he is about to have access to. This is 1st and 10 on the DET 27 with 2:26 left in the 2nd quarter.

54 LB Eric Kendricks tries to time the snap count and gives away his blitz early. Stafford stands up, lets everyone know what he's doing, and lets Kendricks blitz away. Tate runs into the hole Kendricks vacates - the man covering him is 34 SS Andrew Sendejo, who is backed off so far from Tate that he has zero chance of getting there to make a play: 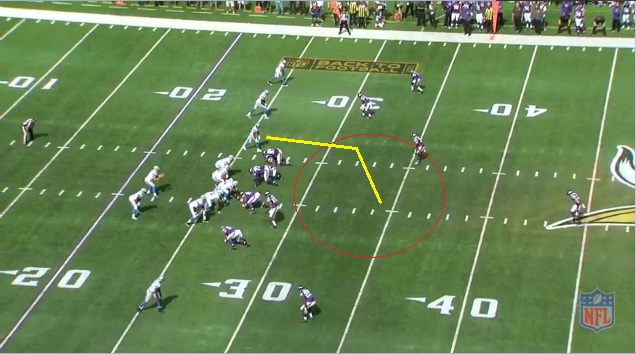 Tate does his YAC thing and picks up 18 yards; Stafford is not hit.

Starting in the third quarter, Detroit started actually throwing this against all the man and pattern match coverage Minnesota was giving them. This stuff is great against zone matchups, too, because it just hits too fast for the defenders to trade off and so effectively attacks it as if it's man coverage.

Here's 1st and 10 on the DET 39 with 8:19 to go in the 3rd quarter. This is the play right before the Riddick fumble. This time, Stafford comes to the line under center and the Vikings telegraph a double A gap blitz. Stafford stands up, adjusts the alignment to a shotgun snap and moves Ebron outside: 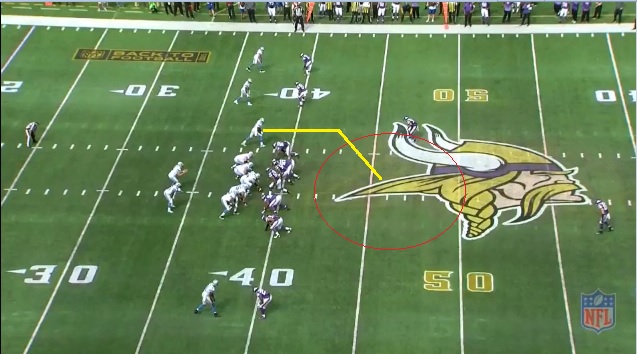 Compare that to the picture above of the Tate play at the snap. Yes, that again is Sendejo way the hell back on Ebron in man coverage:

Ebron is not quite the YAC beast that Tate is (and he probably should have made his break sooner), but that's okay. He picks up 9 yards and Stafford is not hit. Look at the blitz:

Based on what we've seen from Detroit's ability to pick up stunts, would 92 DT Tom Johnson have blown up Stafford if Ebron had instead been held in to block the left edge?

Okay, okay Tate and Ebron... whatever... SHOW ME CALVIN.

Payton has used the slant in many key situations over the past few seasons. In fact, it's been a go-to route on third-and-short or medium situations.

3rd and 2 from the DET 16 with 3:33 to go in the 3rd quarter. This is a "gotta have it" type situation where Detroit is down 23-10 and trying to get the deficit manageable for the 4th quarter.

Want to see something cool? Here's a picture from an article on NFL.COM entitled "Calvin Johnson, Detroit Lions keep opposing defenses guessing" that was posted back in 2013:

Thanks to the brilliant execution by both quarterback and receiver, Johnson snags the pass and streaks to an 87-yard gain. 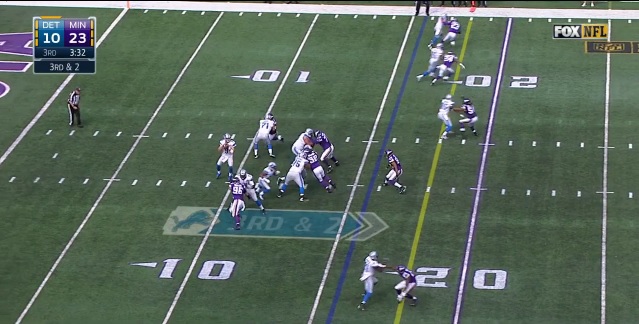