Last time, we took a look at how the Lions can use a quick hitch to attack the perimeter when Stafford identifies an opportunity. While this was mostly thrown to Calvin Johnson in the past, any of our elusive pass catchers will work: Tate, Riddick, Kerley, Jones, etc. Golden Tate's ability burst it upfield makes for great GIFs, as shown by Christopher Tomke's Things of that Nature: Don't Give Golden Tate so much space article:

As with the alert slant and alert hitch passes, what makes this particular play to Tate against New Orleans is the coverage in front of Tate. The play is from 21 personnel (21 HB Ameer Abdullah, 46 FB Michael Burton, and 80 TE Bear Pascoe), with Pascoe to the right and Burton behind him as an H-Back. As with the alert plays we looked at in parts 1 and 2, this is a called run play: 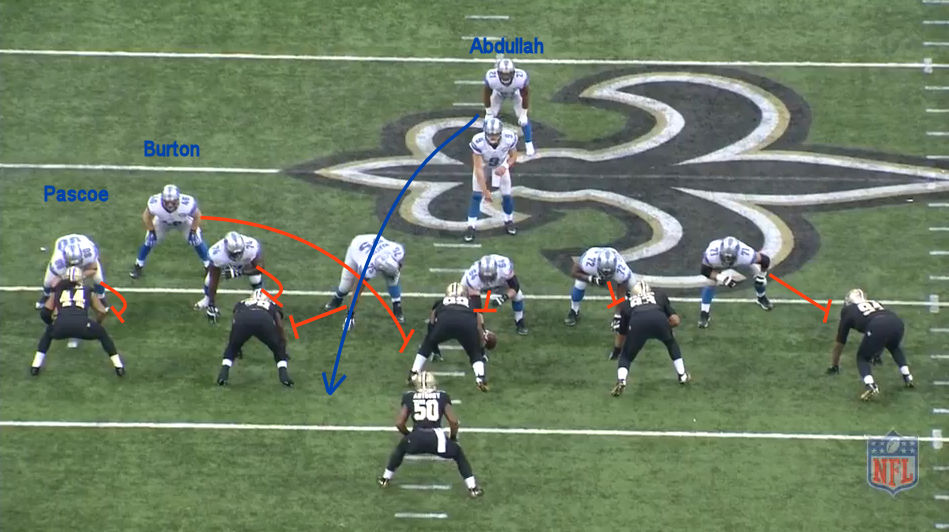 80 TE Bear Pascoe and 74 RT Michael Ola reach and seal the right edge while 46 FB Burton loops behind to slam back inside on 50 MLB Stephone Anthony or 92 DT John Jenkins lined up over 64 C Travis Swanson. Burton's angle of attack is determined by how Swanson is doing against Jenkins since Jenkins is lined up with leverage on the "hole" shoulder of Swanson. Burton in fact ends up attacking the pile and helping on Jenkins.

Had the ball been handed off, 21 HB Ameer Abdullah would carry on the inside trap where 75 RG Larry Warford is lined up. But the ball is not handed off, and instead Stafford turns and throws to Tate on the outside. What is he seeing that makes him call off the run?

The Saints are in an inverted Cover 2 Disguise, with a single high safety 31 FS Jairus Byrd deep and 32 SS Kenny Vaccaro lined up on the edge of the box right outside of Pascoe. This is a stacked box, especially with 40 CB Delvin Breaux sneaking up near the linebackers. Breaux has flipped assignments with Vaccaro and backs off immediately at the snap, taking a deep half while Byrd rotated over the top of Calvin Johnson to the top of the screen.

A consequence of New Orleans lining up in base 4-3 personnel (44 LB Hauoli Kikaha, 50 MLB Stephone Anthony, and 42 LB James Anderson on the field) and playing these boundary support assignment games is that 15 WR Golden Tate in the slot is now lined up with outside leverage against 42 LB Anderson. Not only is this the mismatch from hell for Anderson, he lines up with inside leverage - poor position against a quick outside throw. In fact, Anderson attacks at the snap against the Lions' run formation, moving into even worse position before realizing the ball is going to his man:

This is what a bubble screen is designed to do: it is a quick hitter that pokes at the edge of the defense. Here's Pro Football Focus on the screen pass as a complement to run plays:

Quarterbacks often have the option on run plays to pull the ball away from the handoff and throw a quick smoke route to the wide receiver forcing the corner to make a one-on-one tackle. Bubble screens have also become more prevalent which features a quick-hitting throw to the slot receiver drifting away from the QB with an outside receiver or two blocking for him.

That is exactly what we're looking at here. Stafford is attacking the boundary with the screen to Tate because New Orleans is stacking up inside.

The effect of seeing Golden Tate, Marvin Jones, Jeremy Kerley, Theo Riddick, or any of our other ankle breakers on the outside in space can make a defense spread out. Consider these bits from a 2014 AL.com article on the quick screen game for Alabama:

"The reason we're throwing out there out quick is because of something the defense is doing, whether it's eight guys in the box or they're playing really soft," former Alabama quarterback John Parker Wilson said. "It makes them change their defense and kind of allows you to dictate what they're doing."

Alabama right tackle Austin Shepherd said there's nothing elaborate to execute for the play. It's often a "run option," Shepherd said, meaning the play -- whether it's a run or pass -- is decided after the Crimson Tide breaks the huddle and the quarterback surveys the defense.

All the action on the outside is like a distracting jab to get the opponent's attention. When the defense splits a guy out to make sure Tate doesn't break loose with the ball on the edge, that weakens them up the gut for the right cross from hell. 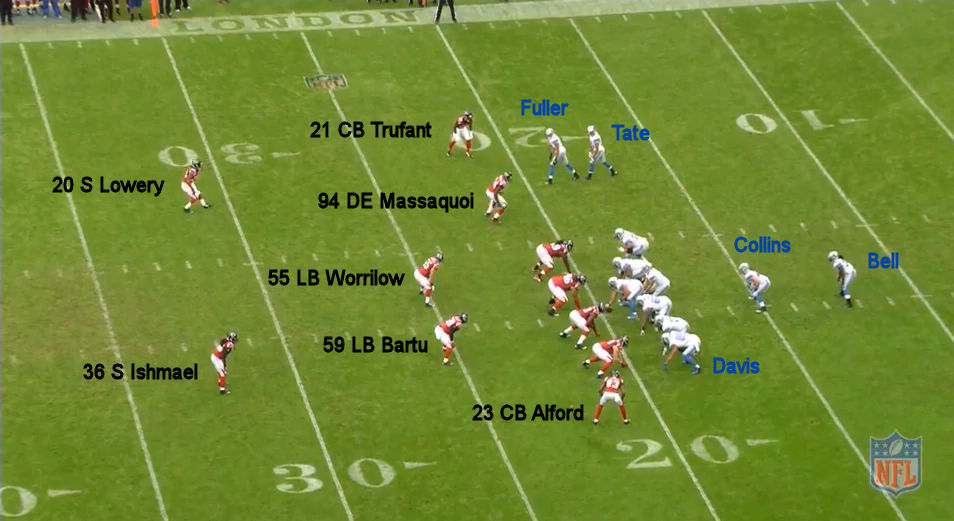 Down 21-0 in London, Detroit lines up on 2nd down rolling heavy in a familiar I Formation: stacked receivers to the right. Without Calvin Johnson in the lineup, the stack is 10 WR Corey Fuller in front of 15 Golden Tate. This is a formation the Lions like to throw the backside bubble screen to the right because all that beef inside (89 TE Kellen Davis and 45 FB Jed Collins) makes an inside run to the left a real threat.

The Falcons counter with a very heavy base 4-3 personnel set with hybrid 94 DE/LB Jonathan Massaquoi over the edge of the box to the Lions' right (in front of the stack). Floating both safeties high, they are playing safe against the pass - which makes sense on 2nd and long. Stafford comes to the line and notices 99 DT Tyson Jackson waving Massaquoi to the outside.

Stafford continues staring down the right side, and watches Massaquoi come in and confirm he's in coverage and then back out as Jackson drops to a three point down lineman stance. At the snap, Massaquoi retreats as part of a 3 on 2 against the stacked Detroit wideouts. The bubble action by Tate forces him to play pass as Stafford hitches on a delayed handoff.

What's Stafford reading off the behavior of Jackson and Massaquoi? 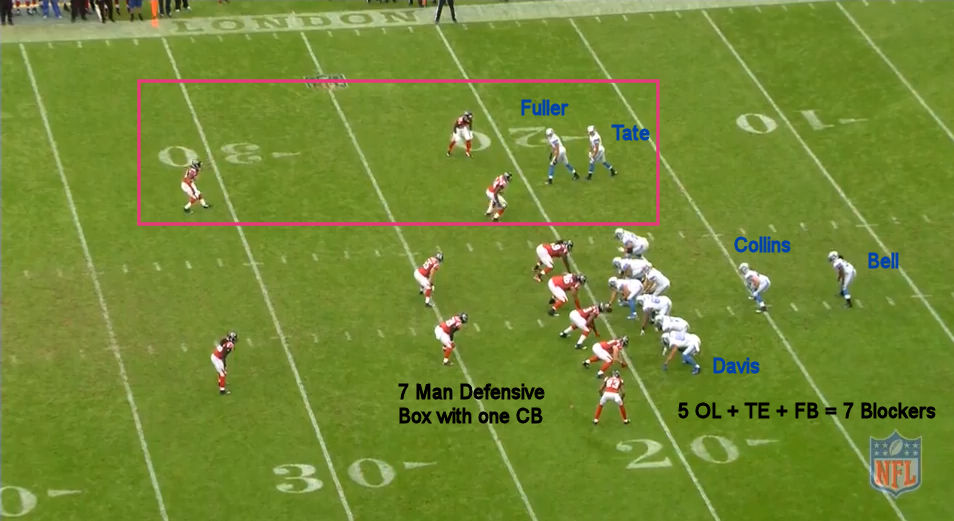 Knowing the Falcons are two high and that one of the edge guys up front is backing into coverage, Stafford counts a light 7 man box. With a blocking TE and a FB in the game plus our inside banger as the ballcarrier, Detroit has the hats to block everyone and smash the ball inside. No matter who goes up against 23 CB Robert Alford on the left edge, our guy is going to be favored to win that matchup. 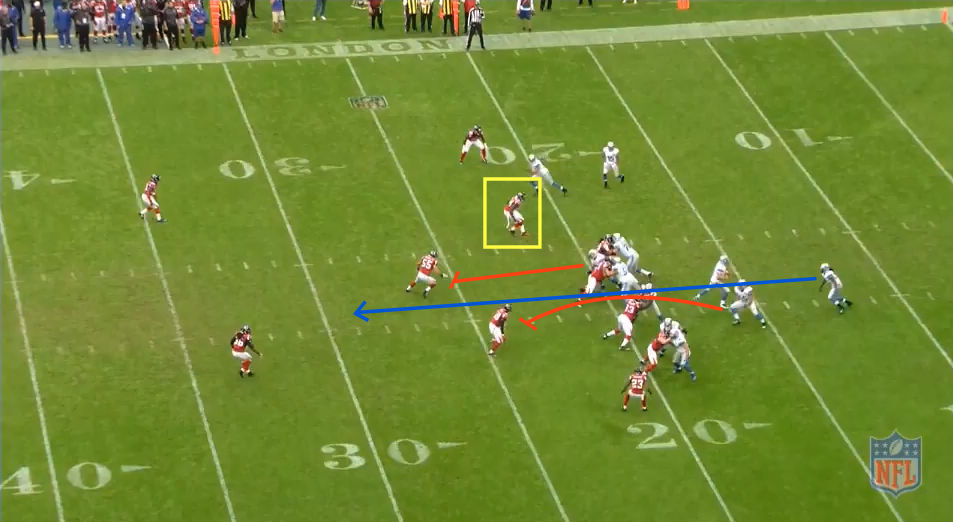 Boxed in yellow, you can see Massaquoi backing out in response to the bubble action of Tate (who now has his numbers turned to Stafford) and the token delay on the handoff. 75 RG Larry Warford releases off the combo block with 51 Dominic Raiola inside to seek and destroy 55 MLB Paul Worrilow, who was also keying the QB action to drop into coverage. Collins fires through the left A gap between Raiola and Big Rob Sims, laying a mean shoulder into 59 LB Joplo Bartu.

Bell punched it up inside for 9 yards before the deep safety could get there. It was no accident that run support from the backside was out of position, though. Instead of run action setting up passing opportunities, a smart read by Stafford used pass action to set up a nice running opportunity. 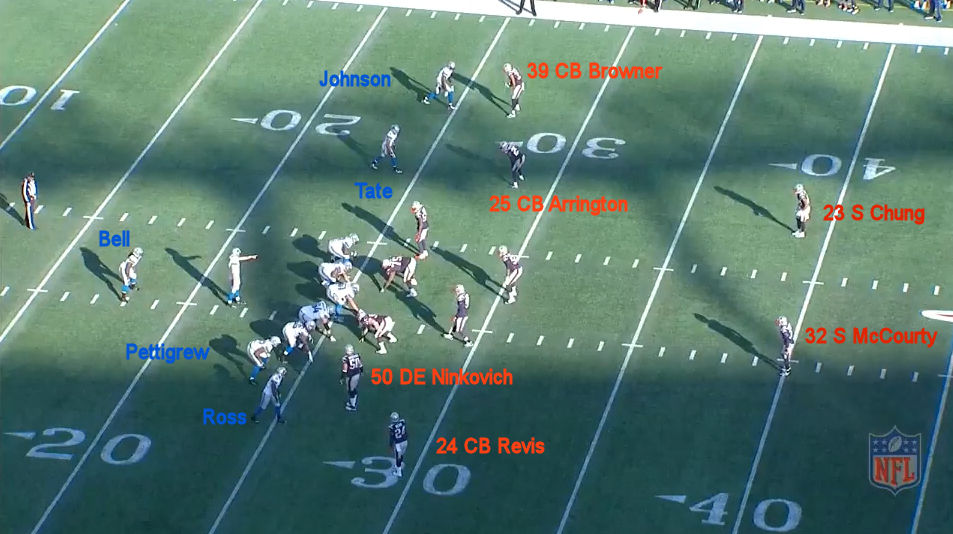 On schedule to start a drive on the road early in Foxboro, the Lions call Counter right with a backside alert bubble option for Stafford out of 11 personnel (87 TE Brandon Pettigrew and lone back 35 HB Joique Bell). This is tipping pass to the Patriots, who put both safeties (23 S Patrick Chung and 32 S Devin McCourty) up high in what looks like the standard 2 Man defense. 39 CB Brandon Browner (on Calvin) and 25 CB Kyle Arrington (on Tate) are rolled up to the line with 24 Darrelle Revis out on Revis Island with 12 WR Jeremy Ross. 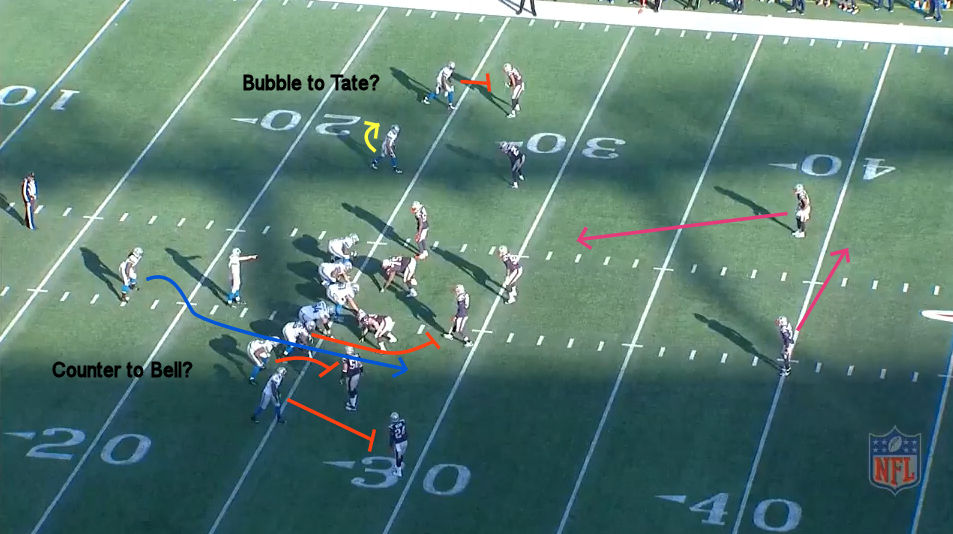 The presnap read for Stafford looks like what is diagrammed above. He can either run the called counter to Bell on the frontside behind the kickout blocks of Ross and Pettigrew or he can turn and throw the bubble to Tate on the backside. Which is the correct read? The answer lies in the spacing in front of Pettigrew and 66 RT LaAdrian Waddle: there is a natural hole where the play is designed to attack, and the nickel personnel with two high safeties suggest some kind of pass defensive call. It turns out Chung moves into the box at the last second while McCourty rotated up behind him, so the call was really Cover 1 disguised as 2 Man.

Obviously with Arrington in Tate's face one on one there is no window to throw the screen. Instead, Bell takes it five yards for a first down.

This is basically the same thing (Counter-Bubble Option), this time against an actual 2 Man defense. Bell takes the counter for 11 yards here, but it's actually more fun to watch 25 CB Jerraud Powers' reaction to Tate in the slot.

Another thing to pay attention to is the initial flow of the linebackers. Why is everyone committing so hard to Detroit's left? It's partially Stafford's ball handling - he turns left and for a split second is giving the linebackers a fake key that the Lions are running that way by flashing the ball away from his body. He then completes the 270 degree spin to give to Bell going right:

Next Time: The All-in-One Combo Play

Now that we've come to the end of the Stafford Offense elements, we'll take an extended look at the mashup concept that's been developed in this Fanpost. Instead of stopping at the combination of a Power Run plus a quick alert perimeter throw component, could the Lions benefit from going full on Transformers Combiner Wars and melding other parts into more exotic combinations?