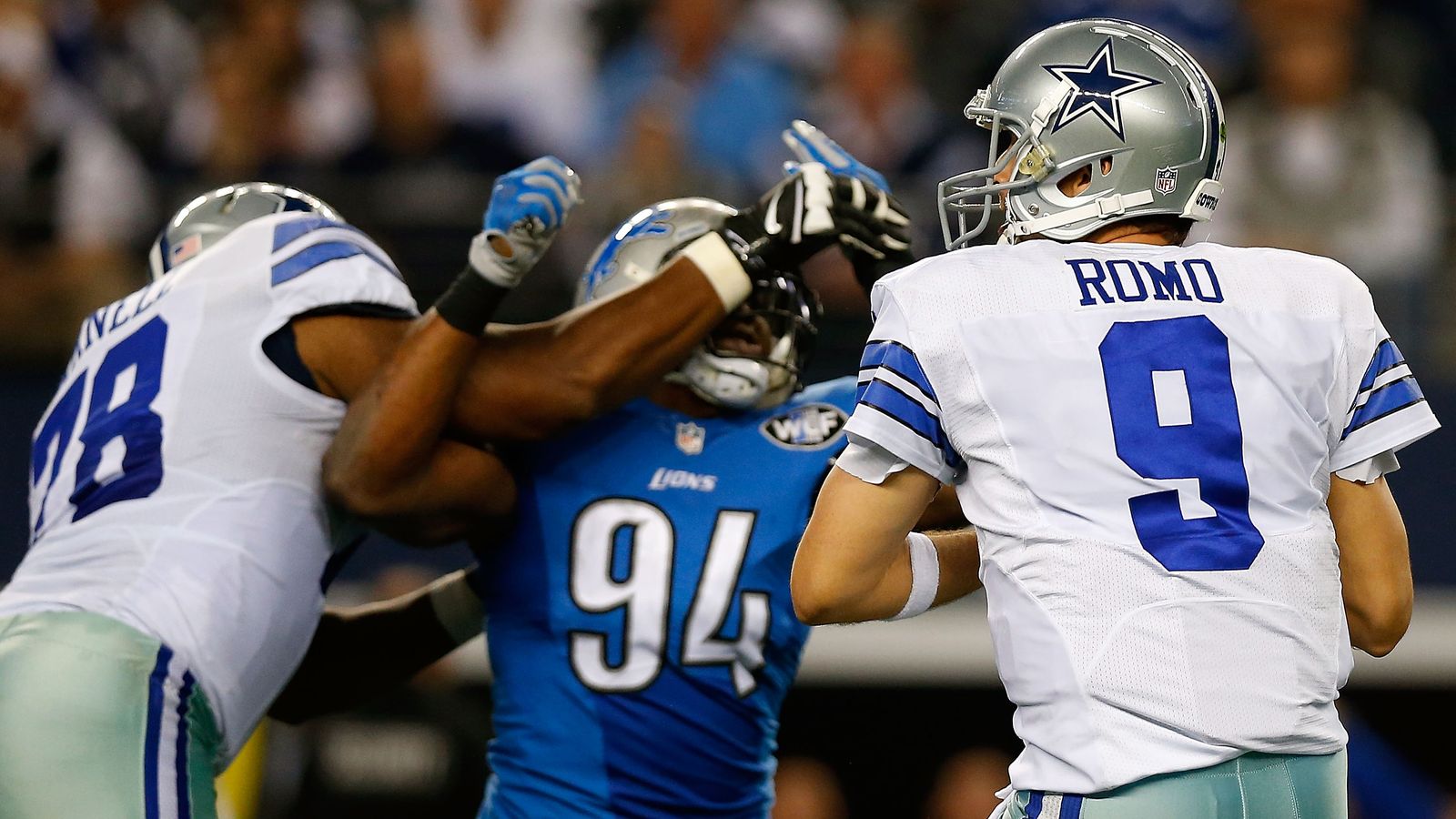 So why isn't this a hold?

After the game that the Lion's just had officiating has been a hot topic on the blog this week. I figured it would then be a good idea to look at how officiating (or the perception) has been affecting the Lions this year. So far the Lion's have only 1 accepted holding penalty this year for 7 yards, while having 9(!) against them for 90 yards! Extrapolated out for an entire season (small sample size I know) that would equate to only 8 holding penalties called against Lion's opponents for 56 yards, not even a full football field. In contrast that would mean the Lion's improved o-line would have been called for 72 holds for 720 yards or 7 fields worth. That's a pretty big difference for a team whose strength is supposed to be their defensive line. So what's going on here? Is the officiating that biased against the Lion's, especially if there's holding on every play?

To break this down better first we need to know what the rule book says about holding.

Offensive holding is defined as follows:

Use his hands or arms to materially restrict an opponent or alter the defender’s path or angle of pursuit. It is a foul regardless of whether the blocker’s hands are inside or outside the frame of the defender’s body. Material restrictions include but are not limited to:

Penalty: For holding by the offense: Loss of 10 yards.

This seem clear enough. The question then becomes two fold. First If there is holding every play why is it not called more often? Second why do some team/players get more or less holds called against them? The first answer is relatively simple. If the refs were to call holding on every play the game would literally never end. You would have entire games filled with sequences similar to this.

"The longest down in NFL history was in the game between the Detroit Lions and the Chicago Bears on Sept. 17, 2006. After jumping offsides 3 plays in a row, the Lions were then penalized 4 times consecutively for holding resulting in an amazing 2nd down and 65.

They were unable to convert. "

No one wants to watch games full of second and 65's where the offense has virtually no chance of ever converting and every game ends with a soccer score. This is America and we do things differently here. Thus we'll never get to a point where holding is called on every play, along with the fact that refs are human and will sometimes just miss a hold they didn't see.
The second question is a little harder to answer. We all want to know why there's no holding called when we see this, or this, or this, but especially this:

There is an actual answer to this question that isn't completely subjective and will enhance your ability to understand the game when you watch it. The reason is that the holding penalty definition up top is incomplete. There is actually an exception built into the rule book that reads as follows.

Exception: Holding will be called if the defender's feet are taken away from him by the offensive player's action

What this is basically saying is the defender has some responsibility in getting holds called as well. If a defender blows by an offensive lineman and the lineman holds on for dear life (like this) then it is holding. But if a defender initiates a "rip" technique (move by a defensive lineman or a receiver trying to escape tight press coverage; involves ripping up with the arm closest to the blocker or bump pass defender to prevent him from holding or pushing you) then they are giving up their ability to get a holding call as long as the offensive lineman continues to move his feet and moves with the defender. As frustrating as it can be to see your DE get so close to a QB only to be held back by what appears to be a choke hold the defender in most circumstances puts themselves in that position.

Now sometimes the defender can trick the ref into thinking they were being held but most of the time the refs are well trained enough to realize when the defender initiated the move. Take Clay Matthews for example. He is one of the best pass rushers in the league, he also tries to use the rip technique here and gets close to a sack but couldn't completely turn the corner because the Vikings lineman keeps moving his feet. Clay knows he lost and tries to see if there is a flag coming (there isn't) and he just moves onto the next play. If he really thought he was held he would have made a bigger deal out of it especially in a 1 score division game. (clay rip play starts at 3:50)

Now you may be wondering "if the rip move negates you from getting a holding call unless the o-lineman basically stands still (which is rare in the NFL because these are pro athletes) why do so many players still use it?" which is a valid question. The simple answer is that the rip move when used correctly can help a defender turn the corner on an offensive lineman once they are hip to hip. It also puts the offensive lineman in a vulnerable position because they are no longer on balance and can't mirror the defender. The problem with the way that a lot of defenders use the move is they forget to finish the move.

Most lineman can get into the initial rip move but they forget (or are unable) to finish the move off to clear their way to the QB or RB. What this should tell you then is that this move when used incorrectly is a boom or bust move. If you completely blow by the o-lineman the rip basically knocks their hands out of the way and you finish at the QB. The opposite happens when the defender simply uses the rip as a base move without having actually beaten the o-lineman to the spot. The defender essentially takes themselves out of the play (getting ridden up field) and in most cases won't get a holding call. If you watch the Lion's defense you will notice they don't actually use the RIP technique very often.

Of course the logical next question would be what move WILL get called for holding more often and is it used by the best defenders? Why yes there is such a move and its a favorite of J.J. Watt and Ndamukong Suh. The swim move. 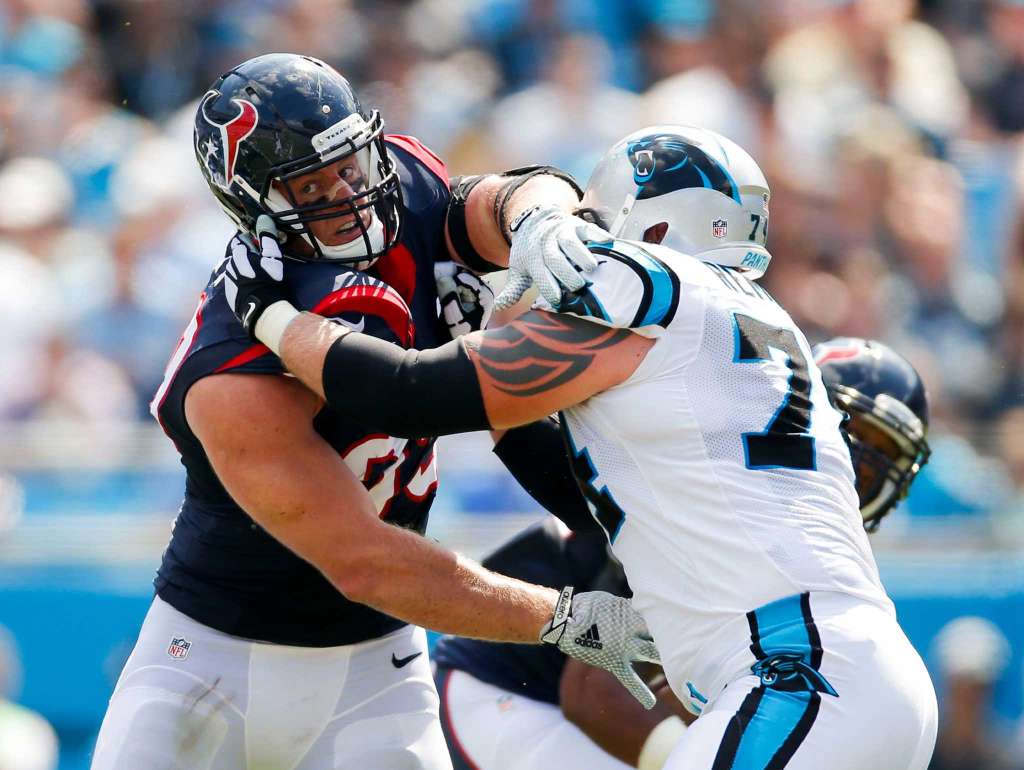 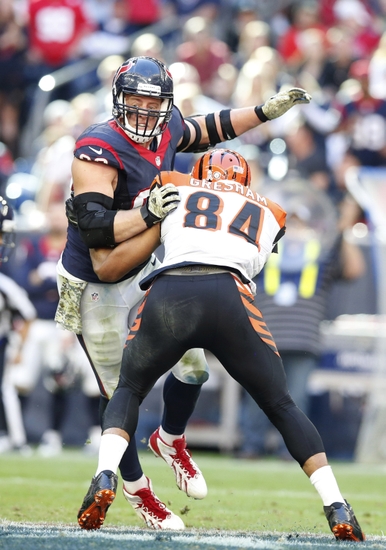 This move isn't for everyone because most defenders aren't strong or fast enough to execute it correctly. Your hands have to be quick enough that you can get your hand clear over the defender. You have to be strong enough that an o-lineman can't attack your ribs mid swim and shove you out of the play. This move when used correctly however draws more holding penalties and can allow easier paths to the QB.

Wrapping up, the next time you see a defense take the field keep these things in mind. Defenders using a rip technique are negating their own ability to get holding calls. Refs understand that the only way for a defender to use that move and still be "held" is if they can no longer move forward while ripping. There are many defensive pass rush techniques. To the untrained eye your fellow fans will be cursing up a storm and yelling at the ref for not calling the blatant hold in front of them. You being the holding savant you are now will be able to tell the difference between a lazy defender taking himself out of a play and an actual missed hold.

Please let me know in the comments if there is another topic you would like me to break down.

Did this enhance your knowledge of holding?