Welcome, Dear Readers, to another week's opinion. Last week's blowout in Baltimore had me in a dark and dreary place. I was feeling weak and weary in the aftermath, but there's nothing like a W to pull you out of the dumps and lift your spirits up. It's like chicken noodle soup for the soul. You ever eaten a W before? Don't! Seriously, your body can't digest that s#!&. It's metaphorical chicken noodle soup, brah. Don't do anything stupid now. Coach Koetter told his team to go after Stafford's injured hand in the run up to this game, and Jameis started licking his chops. He really should have known better - we've all seen how much Winston likes eating hands. Koetter said he was joking, and the team did their best to distract Jameis with crab legs, but the seed had been planted... The seed for a joke almost as contrived as that pregame speach.

Week 14 had our Detroit Lions visiting the Tampa Bay Buccaneers. That franchise has done a lot to try to make people forget about their Creamsicle Winky Pirate origins. But I never forget. All the manly skull and crossbones in the world can't scrub that knife biting pretty boy from my brain. Honestly, what the hell is wrong with that organization? Their original logo is trying to eat knives, their current QB is trying to eat Ws... I have a 1 year old son who puts fewer inedible objects into his mouth for god's sake. Sometimes I think about Detroit's 0-16 season and feel a deep sense of profound cringe. Then I remember the Buccaneers' original logo and that we could, in fact, carry a darker cloud above our heads... 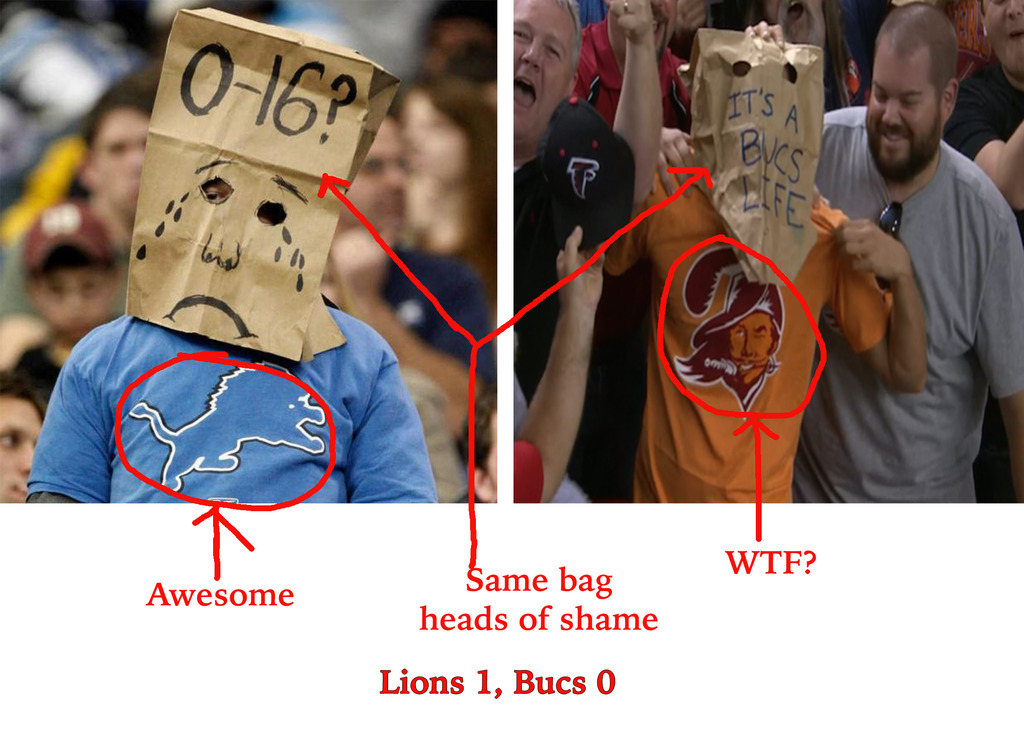 And then I don't feeeeeeeel, so baaaaaaaad

The Lions finally decided to burry their awful opening game script, and decided this time they wouldn't spot their opponents a 2 score lead to start the game. So that was cool. The teams traded 3-and-outs on their opening drives, and that was essentially the last time either defense would get a stop without some help. Pretty much the rest of the game, drives were only killed by turnovers or penalties.

Before the game started, I texted my brother that I believed this would be a high scoring game. The way I saw it, the Bucs are about the only team with a pass rush as bad as ours, so both QBs would be able to sit comfortably in the pocket and pick the other team apart. I saw it as a battle of warm sticks of butter; a real mess in the making. I told him the only way either defense would stop the other team was through turnovers. I was basically right. I was wrong about it being a high scoring game, but that's only because I did not expect so many turnovers. All that warm butter flying around just made everyone's hands slippery I guess. It was like the teams decided football was boring, so they were going to play hot potato instead. And, brother, that ball was HOT.

Detroit drew first blood. They marched down the field effortlessly, with Stafford having plenty of time in the pocket to dissect Tampa's defense. It really was beautiful watching Stafford play with a clean pocket (erase 2 minutes of sheer boneheadery in his last 2 drives to end the 2nd quarter, and he had a perfect showing). Riddick punched it in on a short run to cap off the drive and take a 7-0 lead. The Bucs responded with a nearly identical drive, punching in a short run of their own to tie things up at 7-all. At this point I was like 'told ya, bro - this games' going triple digits!' And then the wackiness started. The first play of the next drive picked up a nice chunk of yards and a fumble to the other team. Not to be outdone, the Bucs fumbled 2 play later when Diggs knocked the ball free from a receiver. Tampa was playing copycat with us. Everything we did, they did right back! STOP COPYING ME!

Incidentally, that Bucs fumble was one of the most bizarre plays I've ever seen. The call on the field of an incomplete catch was clearly wrong, and they assigned a penalty to the hit after the catch that we couldn't challenge. The refs realized they had blown it and were in quite the pickle, so they spent about 20 minutes arguing amongst themselves about the best way to weasel out of it. In the end, they decided to just pretend nothing was wrong and stick with their origional call. 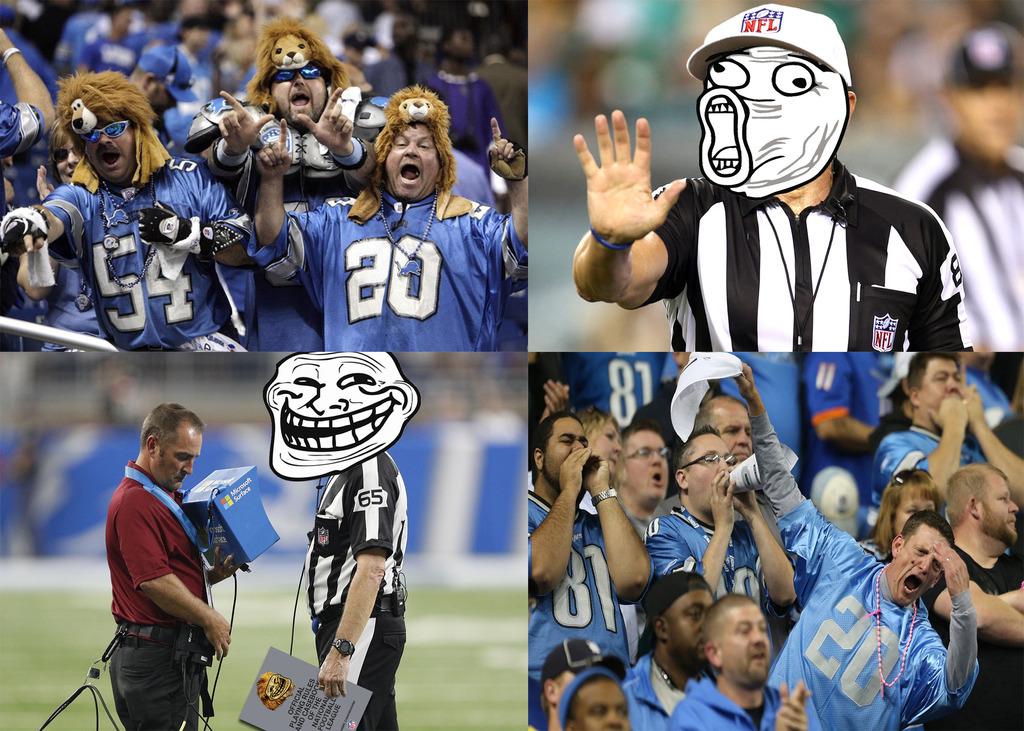 Nothing to see here.

Caldwell had a rare moment of coaching genius, and found a loophole to the rule about not challenging penalties by challenging the incomplete pass the penalty was based on. And it worked! After approximately 40 minutes of reviews and discussions among the refs, the Lions had the ball! They started marching down the field, until a pair of holding penalties did what Tampa's defense couldn't do, and killed the drive. The Bucs responded by tossing our defense a bone, and threw an interception 4 plays later. This game had gotten weird.

Detroit turned that interception into 7 more points to retake the lead. Next the teams traded turnovers, then a Bucs penalty put them into a 3rd and long that effectively killed their drive, then another Detroit turnover, and THEN, mercifully, Tampa took a knee to send the game to halftime. This game had gone full retard. 14 drives, only 4 punts, but also only 3 scores.

The 2nd half picked up right where the previous half left off. Diggs got his second turnover of the game when he intercepted a pass from Winston on the opening drive. 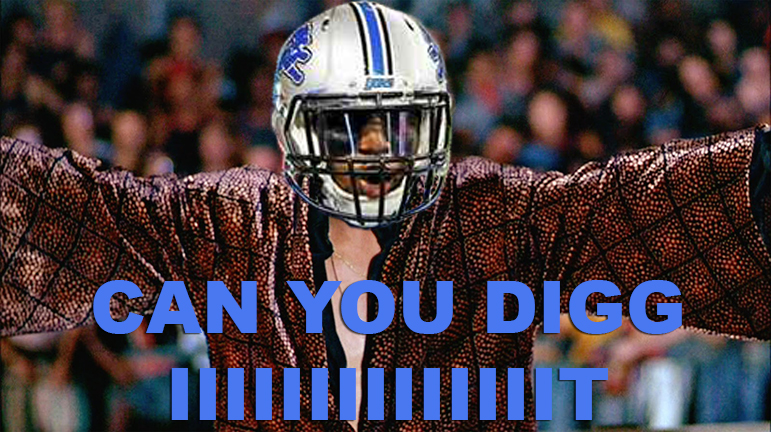 The Lions responded with a penalty that killed their drive, and the Bucs fumbled yet again. If it wasn't a score, turnover, or a drive killing penalty, this game was having none of it. TJ Lang tried to kill the next drive with a holding penalty and keep the pattern going - but Stafford was able to overcome it and scored anyways to take a 21-7 lead. I see Lang still hasn't figured out the holding calls thing now that he's in Detroit. I made him a helpful cheat sheet to help him learn, because I'm a team player like that. 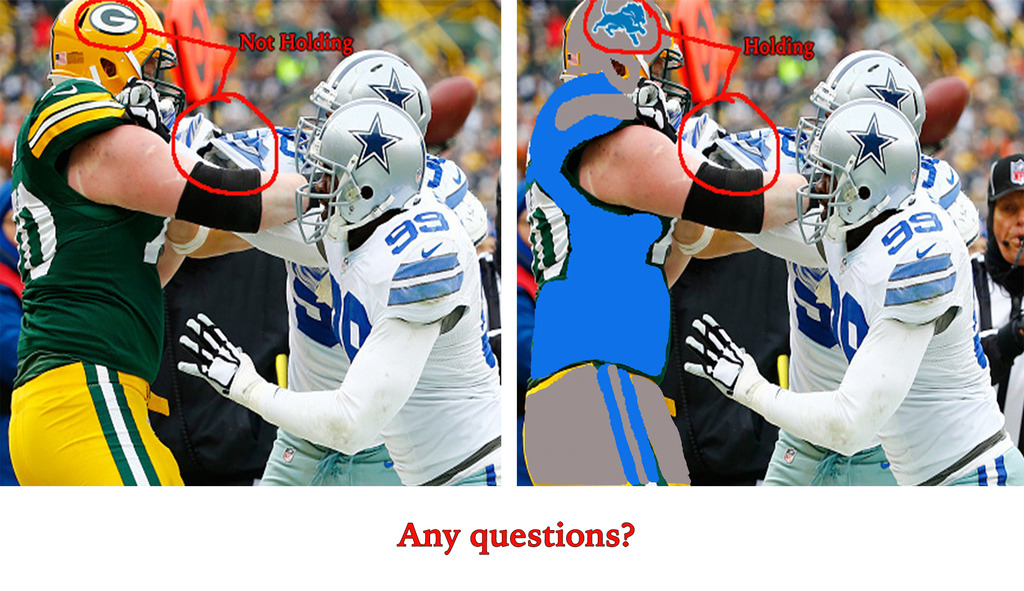 Still playing copycat, the Bucs answered with a score of their own. I SAID STOP COPYING ME, ASSHOLES! Then DET had a drive killing penalty, and TB scored again to tie it up at 21-all.

Then the unthinkable happened. The Lions didn't commit any drive killing penalties OR turn the ball over AND didn't score! For only the first time since their opening drive that happened! But the Bucs weren't ready to stop copying Detroit quite yet, so they did the exact same thing and punted back. Now it was late in the game. We had one drive left to try to take the lead. Now or Never time. 'Round these parts that's known as Stafford Time. Matty McMoneybags killed the last few minutes of clock and led DET into field goal range. Prater came on and kicked a 46 yard field goal to take the lead with just a few seconds remaining, and the Lions closed it out with a 24-21 victory.

So here we sit at the end of week 14 with a 7-6 record, still clinging to our hopes of a wildcard spot. We need to win out to maintain those hopes, but we're not dead yet. There's still hope for next week. And if things fall our way these last 3 weeks, we could be playing in January. Lets brew this up right. 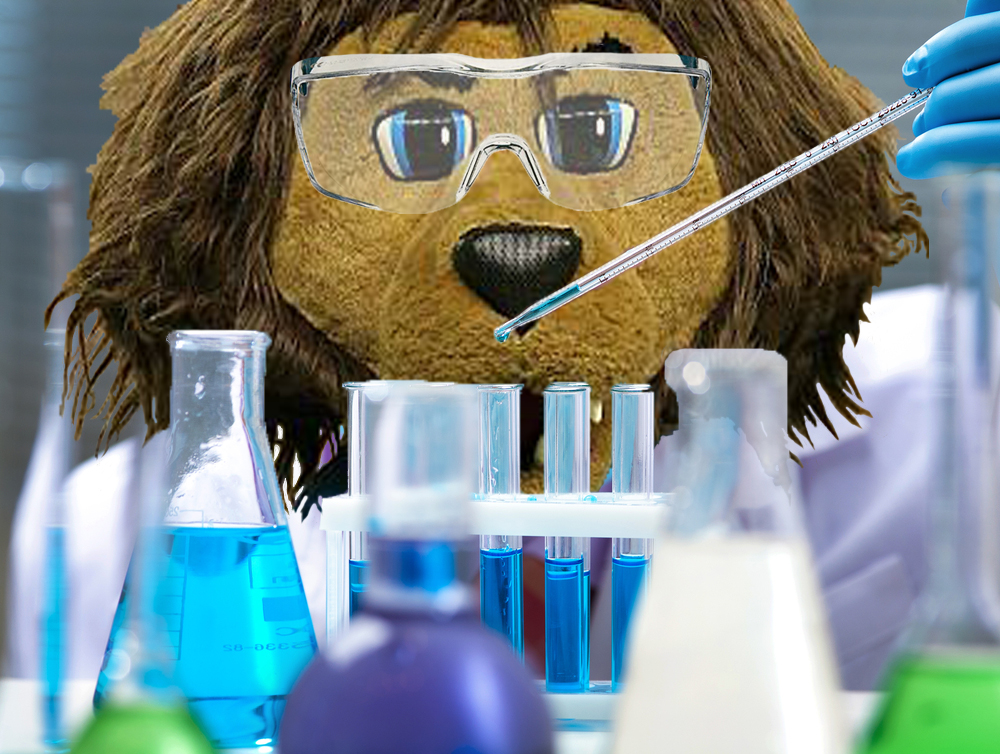 What are we gonna do?