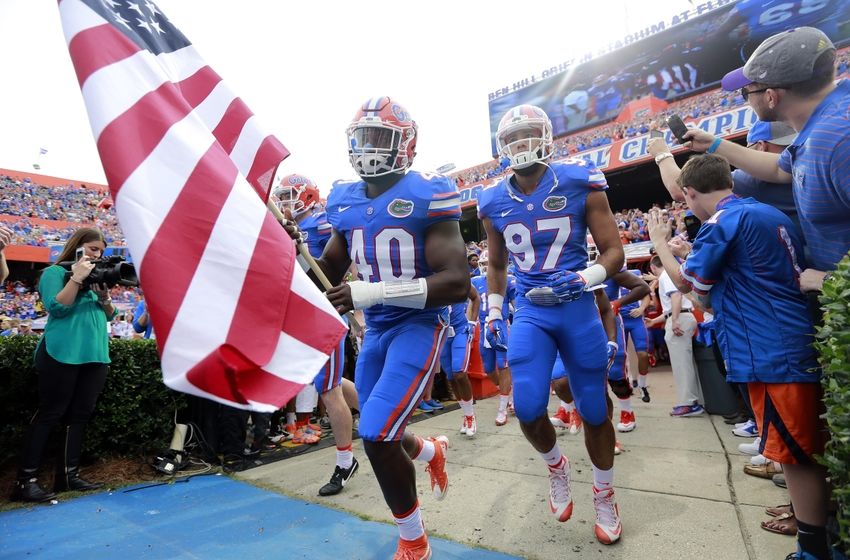 JacobNL here with yet another fan scouting report. I'm happy with all the feedback I received on my Raekwon McMillan post and I'm glad people read it and liked it! Much love from me! I asked you guys which player you would like to see me do next and you guys requested Jarrad Davis so let's get on with it. I'm gonna do 2 more of these posts before the draft so if you would like a similar post about any prospect(position doesn't matter) just leave it in the comments.

Jarrad Davis grew up in Camden County(Kingsland, Georgia) and is probably the most passionate player you will see on any given Sunday. Off the field, he is a calm guy(which he credits to his father) and has a mean(mom) demeanor on the field. He was a 3-star recruit who originally committed to Auburn but later changed his commitment and went on to attend the University of Florida. He was recruited to Florida by current Atlanta Falcons Head Coach Dan Quinn. Although he grew up in Georgia Bulldogs-country he never received an offer from Georgia while HS teammates did. Auburn, Ole Miss, Tennessee, and Florida we're the only ones to offer a scholarship to Jarrad. Jarrad didn't become a full-time starter until his senior year in HS which could explain the lack of offers.

Florida had a crowded linebacker group with a lot of recruits that were ranked well above Jarrad. Although not starting as a freshman he was a star on the special teams. He was the MVP on special teams for them that season. He was also a captain as a freshman during the Missouri game which is extremely rare to have happened and shows that he is a natural leader. He was injured a lot during his college career but had the toughness as well to play through most of them. His passion is second to none. His stats though:

He missed games due to injuries in his sophomore and senior campaign.

His junior year made him a legitimate NFL prospect that should go early in the draft. He had a chance to jump into top 15 by showing solid run defense but Florida's defense is not the greatest scheme to evaluate someone's run defense skills due to it's attacking nature. You will see their entire defense bite on play action and all they try to achieve is getting into the backfield to stop a drive from happening which will create big plays from time to time against it. For example, Georgia Tech's triple threat will create a lot of troubles for an attacking 4-3 defense. He was injured from an injury he tried to play through during the season so all his stats except measurables are from his pro day. Here is his RAS from Kent Lee Platte: 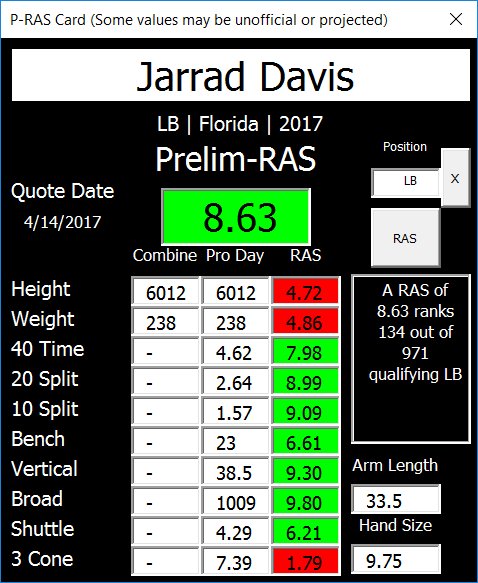 Why Jarrad would be the answer for Detroit

Detroit is lacking a big play linebacker. Levy produced solid years but was cut by Detroit this offseason and none of the other linebackers are nameworthy. Jarrad will bring a nasty attitude, leadership qualities and a relentless motor to the linebacking corps. Teryl Austin prides his defense in always running towards the ball until the play is over. We've seen Ansah/Suh run down Runningbacks for 70 yards for example.

Jarrad Davis wants people to know you are lining up versus him on the field. His coaches had to restrain him in practice at Florida for being overly committed to doing everything at 110% all the time. He does everything at 110%.

Taking out 3 blocks by himself. Even his teammates are surprised by his raw strength.

First off, let me explain a bit more about Florida's scheme. The scheme is designed for the linebackers in an easy 1-2 punch. Diagnosing if it is a run first and then your assignment. You will see both Anzalone and Davis stepping up first before dropping into their assignment. I found throughout the tape that Davis does have good football instincts and great knowledge of the game. Jarrad Davis lives and breathes football and the tape shows it. I think an experienced coach and watching tape in the NFL will give him the platform to possible become a perennial All-Pro in the NFL.

Jarrad Davis is an absolute monster at block shedding. Raekwon was decent at it but this is a d-lineman in a linebacker body. All the potential to be great at run defending

Versus Pass blocking. He airlifts the guard back a few yards while disengaging the block and keeping his eyes in the backfield. I'm surprised he benched only 23 times because he looks like a 30+ guy.

versus run. Uses his arms well and attacks the run instead of letting it come to him. He has the same issue that Raekwon McMillan had with letting the run develop(not a separate topic but will be visible throughout this article).

Remember the 1-2 punch on Davis's assignments. You will see a lot of it during this part of the article. In my previous article about Raekwon's spying, I mentioned he creeps up to the action when spying or in zone. Jarrad Davis is the opposite and stands put and follows the QB's eyes. He has no trouble back peddling, displaying good hips and awareness of the field behind- and in front of him.

Throughout all of his tape, he showed adequate zone coverage. There are some zone coverages in which holes existed around Davis but overall it's a solid B for zone coverage in college.

This is where you will see the difference between Raekwon and Jarrad. Jarrad has shown excellent man coverage in his college career and I'm only gonna show two clips. One versus Alabama and one versus Vanderbilt.

Raekwon makes it difficult to catch a ball but Jarrad just never lets you have a chance.

While he has displayed pure athleticism and a good skillset there are some minor/major flaws in his game. Most are due to his 110% mentality and mental toughness but we're gonna start of with a skill that he has to master if he wants to succeed in the NFL.

Teryl Austin has to improve Jarrad his tackling technique and angles. Jarrad Davis shows a lot of similarities to Kyle van Noy. Kyle wasn't able to change his tackling issues when arriving in the NFL but we should hope Jarrad will be able to.

I talked about his motor and how he never stops until the whistle. Overly aggressive is something either a coach loves or hates. Davis has shown to sometimes make bonehead mistakes for no good reason. It most likely stems from his drive to win but I cannot judge it since I've not had a conversation with Davis myself. Bob Quinn & staff will most likely have to answer though but I still wanted to include the ''personal foul problem'' in this article. Personal fouls are never good.

As mentioned 1000 times in this article. Florida's defensive scheme has holes in it. Jarrad has shown good instincts and field awareness but those two come at a price. Jarrad his 110% mentality comes at the price of getting flags and biting on play action.

Jarrad makes the occasional big play but sometimes makes foolish mistakes in his run defense which qualifies him as an inconsistent run defender. He tends to pick the wrong hole or over engage a block for no reason. Raekwon diagnoses faster and plays the run smarter. Jarrad tends to overcommit or not commit at all.

^Going for the block instead of the play

^Not seeing the run develop

Jarrad Davis is a passionate leader that brings the occasional big splash play to fire up the crowd. His pass defense is adequate enough to start right away in the NFL. His run defense needs work and he has trouble diagnosing the right play versus the run. He has all the natural tools to become a great run defender though. He has drawn comparisons to Jonathan Vilma and I think those are correct. I do think he will be best suited starting off at WILL and move into the ILB role as the season(sophomore year) progresses. I rate his physical attributes/skillset as a top 15 prospect but his mental preparedness is rated between round 2-3. His athleticism and skills will let him be drafted high but he most likely won't be able to start as a rookie since there are too many mental errors in his game. He will shine on special teams though and if able to overcome his mental issues will become a great NFL linebacker.

Thanks for all the feedback from last time! I'm learning a lot by doing these and enjoy making them for you guys. If you have any remarks about my analysis on Jarrad Davis let me know below and if you would like to see me do a different player before(or after) the draft leave a name in the comments. It can be any position on any side of the ball.